If Trumpcare isn't dead, it's in critical condition — and Republicans have no one to blame but themselves

Greed and incompetence may have killed off the GOP's cherished dream of repealing Obamacare. But don't gloat yet 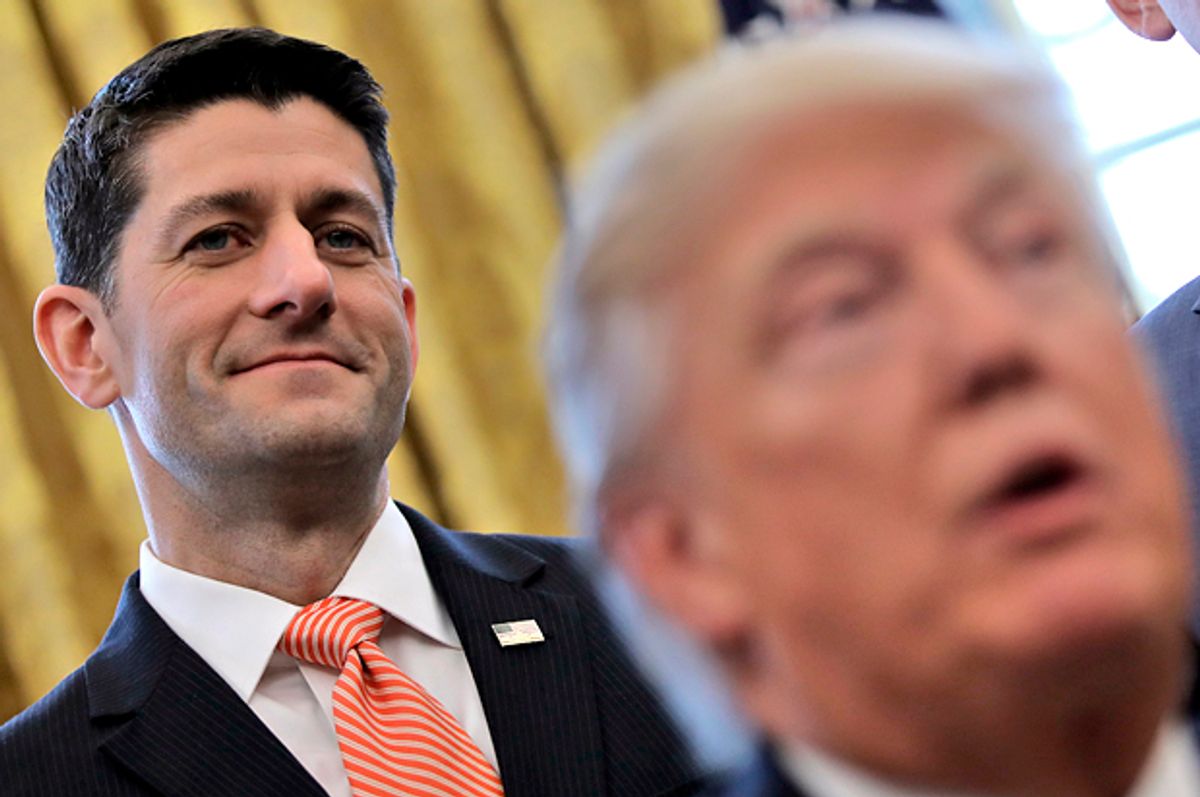 In the end, this has all been as predictable as it has been contentious.

The House of Representatives' fight to pass the American Health Care Act, which would repeal the dreaded Obamacare by dropping the legislative equivalent of a nuclear bomb on health insurance markets, came to a temporary halt late on Thursday afternoon.

Competing factions within the Republican caucus could not come to an agreement on just how badly they wanted to screw over their constituents. Should they eliminate only the essential health benefits that all insurance plans are mandated to cover thanks to Obamacare? Or should they also kill the ban on denying coverage to people with pre-existing conditions and no longer allow young people to stay on their parents’ plans until the age of 26? Decisions, decisions!

By most accounts, the major roadblock to passing the AHCA is the House Freedom Caucus. Many in that group of 40 or so rabid ferrets disguised as hard-right Republicans have refused to vote for the bill unless it includes provisions that would essentially roll back the health insurance market to its pre-2009 state. The White House and congressional leadership kept agreeing to ever more extreme demands by the Freedom Caucus in order to earn its members’ votes.

Unfortunately, caving to the Freedom Caucus means that more moderate Republicans — bear in mind that we are using a very loose definition of “moderate” here — began announcing that they would vote no on the bill. By the end of the day, most of the whip counts showed the bill still short of about 25 or so votes for passage. Since it was obvious that the House leadership would need the entire night to flip many of those saying, “no” to “yes,” pushing the vote off until 2 a.m. or later, Republican leaders instead delayed it until Friday morning at the earliest.

A few hours later, the president, who is easily bored and has the attention span of a tsetse fly with a concussion, gave Congress an ultimatum: He was done negotiating. It was time to vote on Friday and live with the outcome. At last report, House leaders intend to hold a series of votes during the day on Friday, with a final up or down vote on the AHCA to come by the afternoon, whether or not they have adequate backing. It's conceivable that Trump is now prepared for the bill to fail. On Thursday evening, The New York Times reported that the president has told people close to him he now regrets going along with Speaker Paul Ryan's plan to put health care reform before tax cuts.

Meanwhile, the Democrats spent the day playing with puppies. Speaker Paul Ryan was certainly not about to try to get his first major piece of legislation through the chamber with Democratic votes, even if he thought there were any to mine.

It is hard to say whom the Republicans should blame most for this debacle. The House Freedom Caucus for being intransigent, obviously. The party in general, for spending the last seven years riding anger it ginned up among its base by proclaiming Obamacare to be the worst tragedy to befall the republic since South Carolina fired on Fort Sumter. (Actually, many contemporary Republicans probably consider that as a historical high point.) Now that the GOP has ridden that anger to have unified control of the government, it has found itself trying to rush through a bill that would be disastrous for the people who gave it to them. At least some Republicans in Congress want to be re-elected, in 2018 and beyond.

Donald Trump, our mango-colored president, deserves plenty of opprobrium as well. He has spent almost two years insisting he would repeal Obamacare and replace it with something “terrific.” But Trump has zero interest in the nuts and bolts of health care, the way the market works and helps or hurts the public. All he cares about is being able to say he scored a win. But it does not make a person a great negotiator to have absolutely no knowledge about what he or she is negotiating for. It just makes the person an idiot.

Republicans could have kicked off this era of unified government tackling just about anything else besides Obamacare repeal. A major infrastructure bill. Tax reform that would slash the rates of the wealthiest Americans, a GOP dream for decades.

In fact, Ryan’s uncontrolled greed is part of why repealing Obamacare took precedence over tax reform. By rolling back the tax increases on the wealthy that were part of the ACA, he could lower the revenue baseline from which future tax cuts would be calculated. It involved a complicated legislative strategy, one that required a lot of things to go right. But the reward would be an even larger drop in the taxes levied on the upper-income people who buy the speaker his $350 bottles of wine.

So Ryan apparently convinced the White House to go along with this plan, even though, as Democrats could have told the apparently surprised president, health care reform is complicated. You can’t just push through a bill affecting one-sixth of the nation’s economy and every single citizen’s life without considering all the ramifications — to say nothing of the anger that would be generated among voters by tearing away the protections the Affordable Care Act has granted them.

Thus did the siren song of larger tax relief lure the GOP’s ship the SS Repeal Obamacare onto the rocks, where it is being dashed to pieces.

The AHCA is not completely dead: We should find out on Friday morning if Trump and Ryan have any further tricks up their sleeves. But even if this bill somehow survives the House, it also has to pass the Senate, where the challenges are different and the odds are long. The Republicans have dug themselves a huge hole and jumped into it, and no one is about to throw them a rope.