Why do Republicans seem intent on hurting the most vulnerable among us? 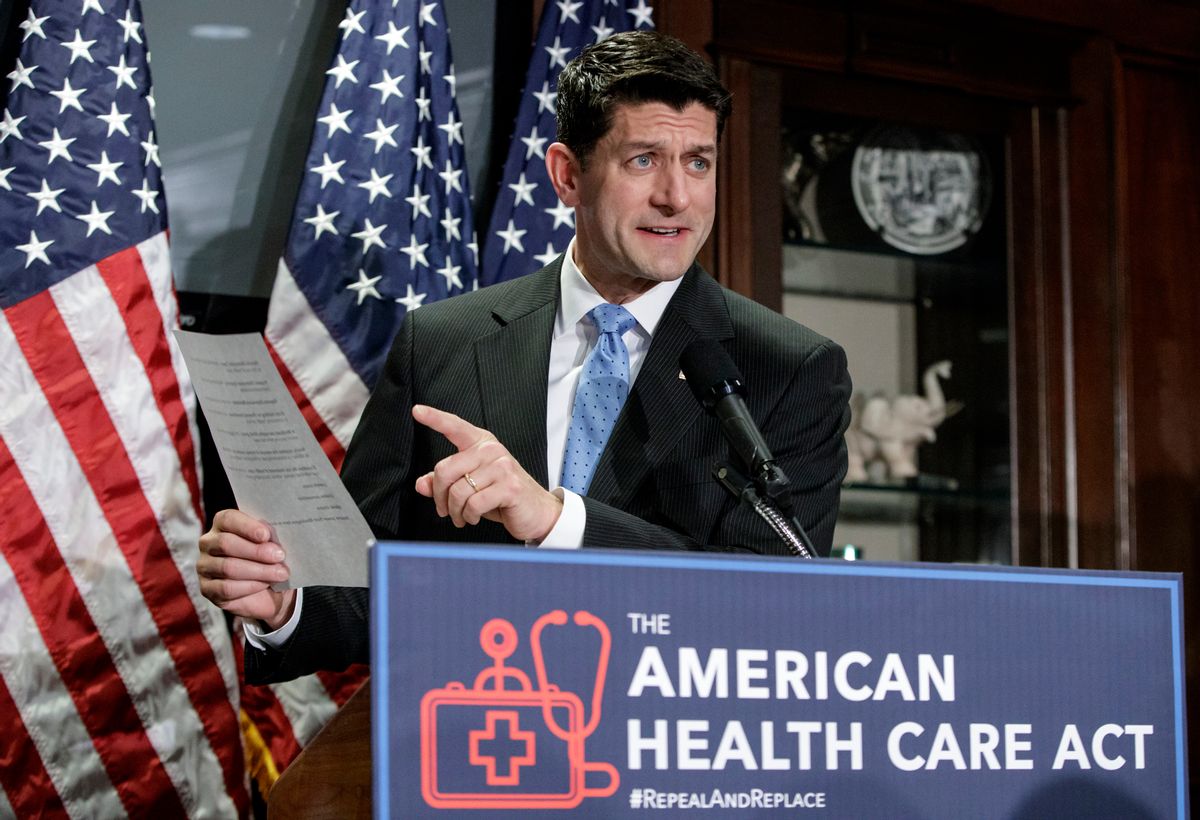 The one question you never hear journalists ask Republicans is why?

Why do so many Republicans want to throw 24 million struggling Americans off the health insurance rolls? Why does the allegedly populist Trump administration submit a budget that slashes job training programs for the very same jobless white folks he claimed to represent?

Why cut Meals on Wheels, child care, after-school programs and learning centers for the poor, affordable housing and aid to the homeless? Why “zero out” occupational safety training and economic growth assistance in distressed communities in Appalachia and the Mississippi Delta (more Trump constituents)? Why slash legal aid and medicine and food for the sick and hungry in the developing world, among many others?

Journalists ask Republicans about policies, mechanisms and money, but those are technical questions when the real and simple question they should be asking is a moral one: Why do Republicans seem intent on hurting the most vulnerable among us?

Unfortunately, the answer may just be, to paraphrase Clint Eastwood’s Dirty Harry on why serial killers murder: because they like it.

Sure, we know the rote answers. Republicans love to talk about “choice” and “freedom” and “markets” and “deficit reduction” and “personal responsibility” and all sorts of ideological claptrap that seems to slap principle on what really is punishment. At best these are smokescreens, at worst traps that have succeeded in entangling the media, Democrats and Americans generally in arguments about tactics or priorities rather than arguments about motives and their real-life consequences.

There was a time when Republicans worried they might be perceived as being on the wrong side of morality, even if that worry didn’t move them to get on the right side. They used to dress up their cruelty not only in those old Milton Friedman free market clichés but in new ones like “compassionate conservatism,” because even as they knew there was nothing compassionate about it, they also knew that most Americans weren’t buying into letting the poor fend for themselves. That wasn’t American. That wasn’t human.

Some of that window dressing remains in the Trump era, but not much. Republicans still feel obliged to declare that their health care plan will cover more Americans at a lower cost, but everyone knows they are lying. By one report, when the White House ran the numbers, it predicted 26 million would lose health coverage — 2 million more than the Congressional Budget Office figure.

Speaker Paul Ryan was more than sanguine about those sufferers. He flashed a vulpine smile in recounting the CBO numbers, actually saying they were better than he had thought, which is to say that the American Health Care Act, as they call it, may have been intended to deny coverage, just as Trump’s budget clearly was intended to hurt the most vulnerable, including those vulnerable supporters of his. To my mind, these weren’t collateral effects. They were the very reasons for the AHCA and the budget.

So, again, why? What kind of people seem dedicated to inflicting pain on others?

It is not an easy question to answer, since it violates all precepts of basic decency. I suspect it comes from a meld of Calvinism with social Darwinism. From Calvinism, conservatives borrowed both a pinched and unsparing view of humanity as well as the idea of “election” — namely, that God “elects” some folks for redemption, which, when rebooted for modern conservatism, has an economic component. Plain and simple, rich people are rich because they are better than poor people.

By the same token, poor people are poor because they are worse. This is God’s edict, so to speak. (The so-called Calvinist revival has an awful lot in common with Trumpism.) From social Darwinism, they borrowed the idea that this is the way the world should be: winners and losers, those who can succeed and those who can’t. It is a world without luck, except for tough luck.

From this perspective, conservatives may not really think they are harming the vulnerable but instead harming the undeserving, which is very different. In effect, conservatives believe they are only meting out divine and natural justice. It’s convenient, of course, that this justice turns out to be redistributive, taking resources from the poor and middle class and funneling them to the wealthy, who happen to be the benefactors of conservatism as well as its beneficiaries. (Just note how Republicans howl about redistribution when it is the other way around.) Where many of us see need, they only see indolence and impotence. It is, by almost any gauge, not only self-serving but also plainly wrong — moralistic rather than moral.

But if Republicans see their moral duty as denying help to the weak, that denial is part of a larger and even uglier social equation. In a recent New York Times column, Linda Greenhouse recalled an exchange 30 years ago between Robert Bork and Illinois Sen. Paul Simon during Bork’s confirmation hearings for the Supreme Court. Simon asked Bork about a speech he had given two years earlier, in which the judge said:

“… when a court adds to one person’s constitutional rights, it subtracts from the rights of others.”

The senator asked, “Do you believe that is always true?”

Judge Bork: “I think, Senator, that is not correct.”

Remember that although (or perhaps because!) his Supreme Court nomination failed, Bork is a conservative deity. As far as conservatives and Republicans are concerned, to give anything to the less fortunate is to subtract it from everyone else — a zero-sum game between the rich and the rest of America.

This isn’t politics. This is bedrock conservative philosophy. And it may have no more eager avatar than Donald Trump, who is all about winning and losing. Trump has always professed to want to blow up the system. He is like a child knocking down a tower of blocks, only in his case the blocks are American democracy and decency.

But with the AHCA and his Draconian budget, one that even a few Republicans — no doubt fearing voter retribution — blanched at, Trump may not have blown up the system so much as he has blown the Republicans’ cover. He even seems to have emboldened some of them to come out of hiding and admit that any assistance for the poor is too much.

This we always suspected. What is harder to parse is the joy conservative Republicans seem to get in hurting the weak, making the GOP not just the punishment party, but also the schadenfreude party. Or put in different terms: Conservatism didn’t create meanness, but meanness sure created conservatism.

We might be able to understand that sense of smug moral and social superiority from doctrinaire Republicans who spout Ayn Rand and detest those whose hurdles are the highest. We all know hate can be intoxicating. But these past two weeks Ryan and Trump have been gambling on something else — that many of their fellow Americans agree with them, that these Americans share a deep and abiding hostility to those who need government assistance. Whether Ryan and Trump are right may very well determine the fate of this administration and the country.

So the second big question, alongside why Republicans and conservatives seem to luxuriate in cruelty, is why any other ordinary American would. There have been predictions on the left that once those ordinary Americans feel the sting of losing health care or job training or work safety regulations or clean water and air, they will revolt, and Trump will be dust. But there is no certainty to this. A recent New York Times piece on this very issue indicated that at least some Trump supporters know they will suffer from his budget and still support him.

When you think how much the government does for so many across such a wide spectrum, you wonder what world these people are living in. Indeed, a signal achievement of conservatism, decades in the making, has been pitting the “have littles” against the “have nots” while the “have lots” stayed above the fray. Of course, by that calculation, you might think the struggling white working class would be on the loser side of the ledger, sentenced to defeat by their own deficiencies in our Darwinist world. But in another neat trick, Republicans have managed to convince them they are victims of twin demonic forces, government and liberal elites, that disrupt the natural order of things. In this way, many Republicans helped turn many Americans into brutes and our American community into a state of nature. There couldn’t have been a President Trump without it. There couldn’t have been an ACHA or a Trump budget either.

This, then, is a vital moment for American morality and, to the extent the two are intertwined, American democracy. You can’t pretend Trump and his Republican pals are trying to achieve good ends by different means. They aren’t. You can’t act as if they give a damn about the millions of poor and working-class Americans. They don’t.