Dutch kids aren't stressed out: What Americans can learn from how the Netherlands raises children

UNICEF rated Dutch children the happiest in the world, and American kids aren't even in the top 25. Here's why 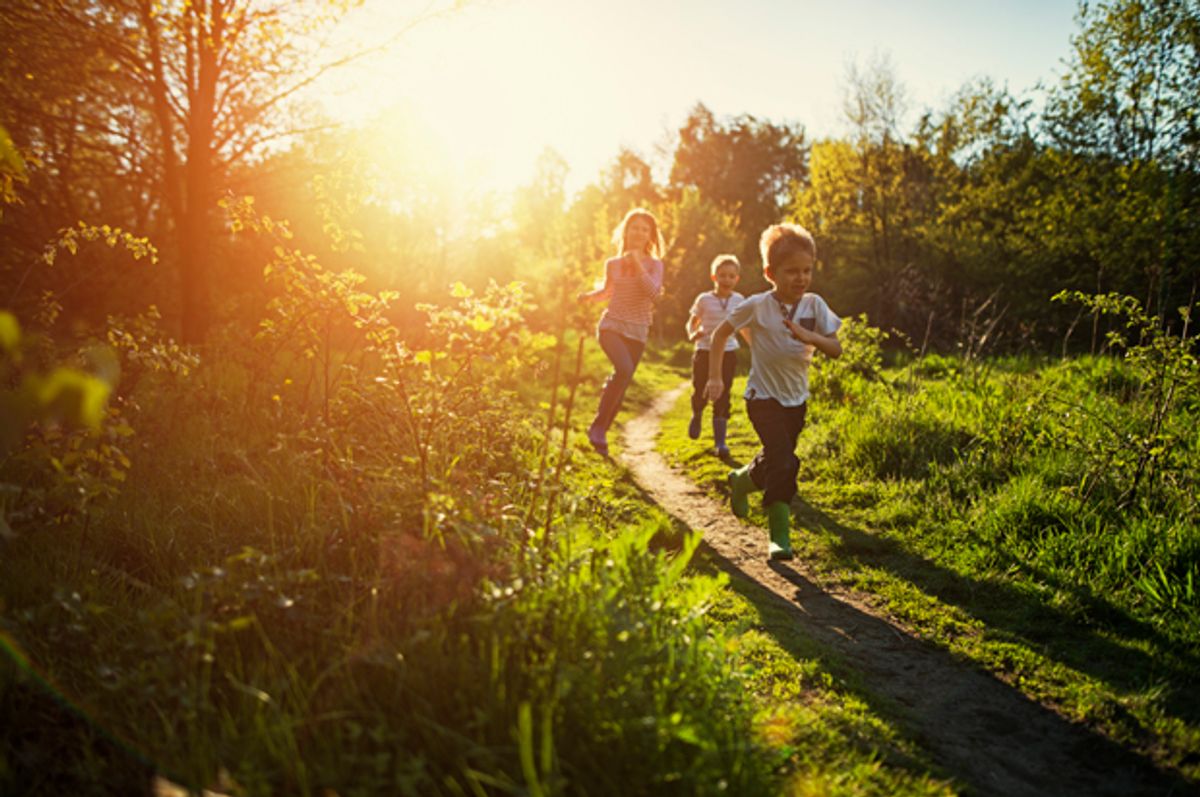 Balance tech with time together (Getty/Imgorthand)
--

An adapted excerpt from "The Happiest Kids in the World" by Rina Mae Acosta & Michele Hutchison. Reprinted with permission of The Experiment.

Two toddlers have just chased each other to the top of a jungle gym while their mothers are lost in conversation on a nearby park bench. A gang of older children in tracksuits comes racing along the bike path, laughing. They overtake a young mom, who is cycling slowly, balancing a baby in a seat on the front of her bike and a toddler on the back. A group of girls is playing monkey-in-the-middle on the grass. Not far away, some boys are perfecting their skateboarding moves. None of the school-age children are accompanied by adults. This is no movie, just a happy scene on a regular Wednesday afternoon in Amsterdam’s Vondelpark.

In 2013, UNICEF rated Dutch children the happiest in the world. According to researchers, Dutch kids are ahead of their peers in well-being when compared with twenty-nine of the world’s richest industrialized countries. The U.S. ranked twenty-sixth, just above Lithuania, Latvia and Romania – the three poorest countries in the survey.

As an American mom and a British mom, both of us married to Dutchmen and raising our kids in the Netherlands, it’s hard not to notice how happy Dutch children are. The scene we described above should give you an idea why: Childhood over here consists of freedom, plenty of play and little academic stress.

When we compare notes with friends back home, we hear horror stories, often to do with draconian selection processes to get into schools, starting at the tender age of three. These days there’s even such a thing as “good” or “bad” birthdays and “red-shirting” to ensure children have a head start over the other children in the class. In America, parenting has evolved into a highly competitive, exhausting business and schooling into a warzone with children drilled like miniature soldiers.

Of all the parenting decisions we have to make, our child’s education is one of the most fundamental. Education is seen as the route to success and a guarantee of a happy future. No American parent can ever be sure they’ve made the right decision, whether they’ve chosen private or state schooling. If you don’t get your kid into a good nursery school, they won’t get into a good prep school. A good prep school is essential to get your child into a decent middle and then high school. And, of course, a decent high school is essential to get a place at the best university. Many parents will go to great lengths to get their child into the right school – taking out an extra mortgage, or moving to a different town.

But in the Netherlands, childhood is unencumbered with any of these particular concerns. Education has a different purpose: the route to a child’s well-being and their individual development. Schools in highly-populated areas use a lottery process to select students, rather than competitive entrance exams and heart-wrenching interviews. To get into most college programs, all a student needs is to pass high school exams at the right level. As a result, there is no real pressure to get straight A’s. In order to come to grips with the Dutch school system, we had to let go of a lot of things we’d been brought up to believe in and re-examine what education was all about.

In Dutch primary schools, kids start school at four but don’t start structured, formal learning — reading, writing, arithmetic — until six years old, Year 3. If they show interest in these subjects earlier, they are provided with the materials to explore them. Children may learn to read and write in their first year of school this way, but there is no pressure. Classmates who learn to read later, at six or seven, show no particular disadvantage and soon catch up.

Most schoolchildren don’t get any homework until they leave primary school. It’s unsurprising; a growing body of research suggests that homework for young children is a waste of time and has little or no benefit in enhancing learning or performance. Play, which is also a learning process, and having fun are considered more important here in the Low Countries than getting ahead academically.

According to the American National Institute for Child Health and Human Development, “Reading is the single most important skill necessary for a happy, productive and successful life. A child that is an excellent reader is a confident child and has a high level of self-esteem.” By not forcing children to read too early, reading becomes a pleasure, not a chore.

Rina’s three-year old Julius attends peuterspeelzaal (playschool) four times a week. At each session there are, at most, sixteen children, supervised by two teachers. Julius is shy and doesn’t talk much around strangers or in big groups, and is getting extra help to develop his language skills — but through play rather than formal instruction.

A typical session at playschool involves play, listening to stories, arts and crafts, and music. There’s no attempt to teach the letters of the alphabet or numbers. Dutch playschool revolves around children doing what they enjoy best — playing, and interacting with other children. Cool, calm Dutch moms seem to love the laid-back approach which the teachers assure them is the best for their kids.

A Dutch friend, Maria, who lives in San Francisco with her husband and six-year-old, muses, “Being an outsider, I’m constantly amazed at how American moms are different from Dutch moms. My mind is blown on a daily basis. There’s this preoccupation with reading at a young age — they believe that the ability for younger kids to learn to read and write and recognize numbers will somehow mean more success later in their academic life.”

Ottilie, another Dutch mom living in San Francisco, says, “Both my kids started reading ‘— when they were almost seven. The school flagged them for reading help at the age of six, but I turned it down. I wanted to wait, since it’s thought normal in Holland that not all kids are ready to read at five or six. Then, when they were turned seven, they both started reading. They advanced super-fast and have since been avid readers, reading at higher levels than is standard for their grade. If they had had specialist help, that program would have received the credit for this. But I’m convinced that kids, as long as they don’t have dyslexia or other learning issues, will simply learn how to read when they are ready.”

“A six is enough”

In the Dutch approach to primary school education, there is no top of the class to aspire to. The same is true of secondary schools in which pupils are streamed into different schooling types: vocational/professional/academic. Once you are in a particular stream, you need to score an average of six out of ten to stay at this level. Marks are deducted for mistakes and perfection (ten out of ten) is virtually unattainable. Most students score sixes and sevens. This is sufficient to secure their high school diplomas and a place at a university, college, or technical program after graduation. In a new study, only 18% of Dutch students said they were studying hard with an 8 [A] as their aim, one student quoted said, “I’d rather get a six and have no stress than a seven and have no life.” Only a small percentage make an eight average, and this is considered extremely high. Dutch scores are graded on a curve, so an individual score is relative to what everyone else scored.

In the academic stream, if students have made it through with a passing grade, they are considered bright enough to merit a place at university. There is certainly no grade inflation. As a consequence, there is no escalation in competitiveness as students aim for the highest grades to ensure a place at a university. It is a very fair system since it avoids elitism.

The advantage of the Dutch school system is that it keeps children in the race for as long as possible, as opposed to their being eliminated along the way in a competitive battle to the top. It also fosters curiosity in children, allowing them to develop at their own pace and enabling them to pursue studies that they’re passionate about.

Rina Mae Acosta, along with Michele Hutchison, is co-author of "How Dutch Parents Help Their Kids (and Themselves) by Doing Less".

Michele Hutchison, along with Rina Mae Acosta, is co-author of "How Dutch Parents Help Their Kids (and Themselves) by Doing Less".