The inability to face reality is not a bug in conservative politics — as Paul Ryan just found out; it's a feature 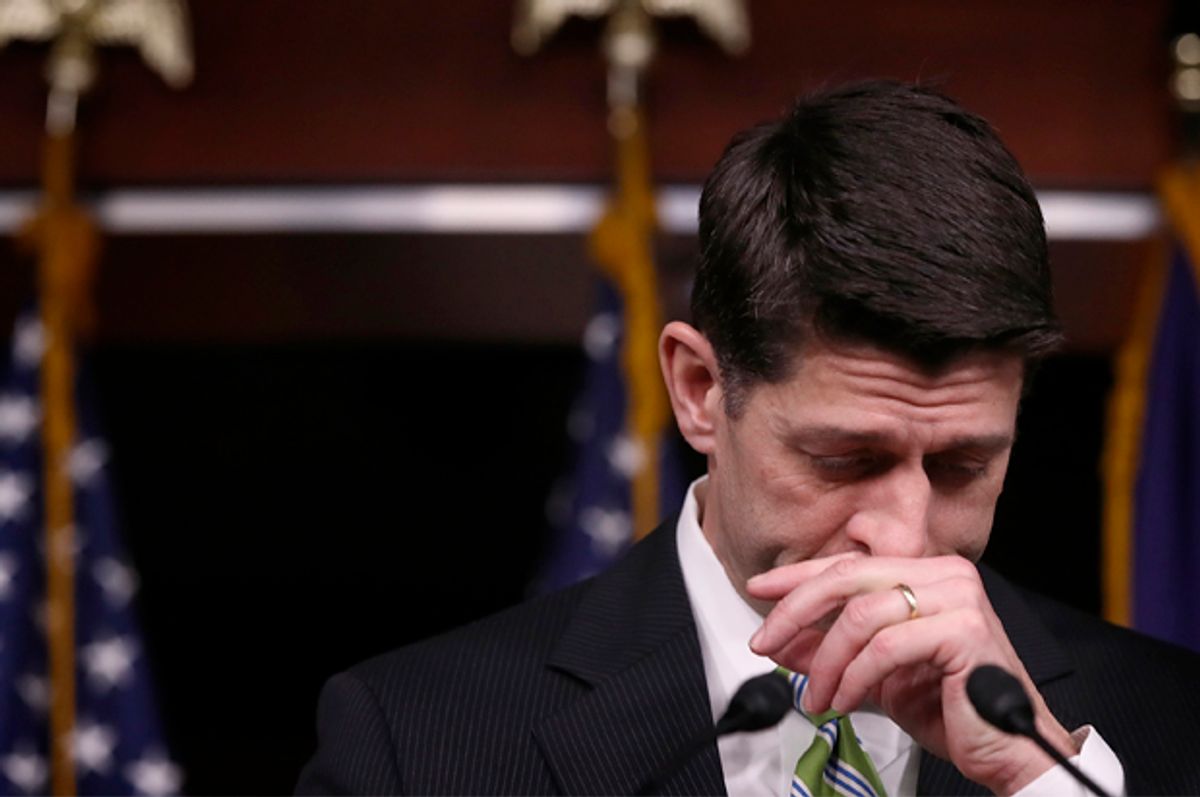 WASHINGTON, DC - MARCH 24: U.S. Speaker of the House Paul Ryan delivers remarks at a press conference at the U.S. Capitol after President Trump's healthcare bill was pulled from the floor of the House of Representatives March 24, 2017 in Washington, DC. In a big setback to the agenda of President Donald Trump and the Speaker, Ryan cancelled a vote for the American Health Care Act, the GOP plan to repeal and replace the Affordable Care Act, also called 'Obamacare.' (Photo by Win McNamee/Getty Images) (Getty/Win McNamee)
--

For the last seven years the universal refrain among Republicans and conservatives was about how terrible and unpopular the Affordable Care Act was. Repealing it was going to be a cinch, they figured, since everyone hated the law.

Who wouldn’t want to repeal a system that was “collapsing,” all the GOP presidential candidates last year were continually asking.

What they never bothered to consider was that a huge reason why Obamacare was relatively unpopular was because a significant number of its critics figured the law didn’t do enough to expand coverage. Before the law was signed 40 million Americans don't have any form of health insurance. Currently, according to the Congressional Budget Office, 28 million lack it.

Many people on the left were also unwilling to support the Affordable Care Act because to a very large degree it was based on older plans fashioned by the conservative Heritage Foundation in the 1980s and then by Massachusetts Gov. Mitt Romney in the mid-2000s.

The reality that many people wanted more spending from Obamacare rather than less ought to have become more evident to Republicans as the approval ratings for the law flipped in January after President Donald Trump took office and the prospect of a Republican health care bill became more than just a vague possibility.

The trend began in November shortly after the election, when Obamacare’s approval rating jumped 4 points to about 44 percent in the RealClearPolitics average of surveys. On Jan. 20, the day that Trump was sworn in, the law had an 47.8 percent approval rating, slightly higher than the 47.6 percentage share for disapprovals.

Since that time, more people have favored the Affordable Care Act than disliked it. Liberals and leftists who formerly had rejected ACA as too centrist are now beginning to come around to the law’s defense, once it became clear that Republicans could actually roll back some of its provisions.

It doesn't appear that conservatives paid any attention to these facts, however. That's largely because being unable to face political reality is not a bug of conservative thinking; it's a feature. Ever since the 1964 takeover of the GOP by acolytes of Barry Goldwater, promoting conservative values of responsibility, freedom and stability became less important to most Republican politicians and activists than their fetish for shrinking the size of government.

Originally, American conservatism was supposed to be about "libertarian means for traditionalist ends," as early National Review editor Frank Meyer frequently described it. Nowadays, the means has become its own end.

During the Cold War era, the conflict between conservative values and conservative methods was less in evidence. In part, this was because the American right prioritized winning in the foreign policy realm over implementing their ideas in the domestic realm. That led Presidents Ronald Reagan and George H.W. Bush to numerous fiscal compromises with the Democrats who controlled the Congress. Both presidents raised taxes several times. Despite vague promises, neither did much to cut the federal budget.

But prioritizing foreign policy wasn’t the only reason that Republicans of the past were less dogmatic about attacking government spending. There was still an understanding among many of them that sometimes the ideal could not be achieved. National Review founder William F. Buckley Jr. was a perfect example of this drift toward realism. By the time he died in 2008, Buckley had changed remarkably from when he had first started out in the early 1950s.

In his early years Buckley had been much angrier and directed much of his rage at his fellow Republicans. His first book, "God and Man at Yale" of 1951, was essentially an extended-length rant against professors at the famous Connecticut university who weren't biblical fundamentalists. National Review itself was started in part because Buckley and his associates had despised then President Dwight Eisenhower.

The former general’s creed that “the legitimate aim of government is to do for a community of people, whatever they need to have done, but cannot do at all, or cannot so well do, for themselves” was anathema to these early conservatives who were convinced that any sort of welfare state would inevitably lead toward communist tyranny. Buckley’s mentor Russell Kirk famously elucidated this perspective in a ludicrous essay arguing that a federal subsidy for school lunches was “a vehicle for totalitarianism.”

As he aged, however, Buckley’s perspective began to change. He came to like Ike. He came to realize that drugs couldn’t be effectively criminalized. He realized that radical Islam wasn't the immensely powerful force that today's conservatives imagine it to be. He didn't become a liberal or a moderate. He just stopped being foolish.

In large measure this was because his generation of Republicans eventually won elections and had to govern. They soon found that as the heads of the government, they actually had to do something beyond angrily shaking their fists at the world.

Perhaps the best example of this was the Heritage Foundation, created in 1973 thanks in large measure to the efforts of an activist named Paul Weyrich. Instead of coming up with policies for implementing conservative values, however, the perpetually angry Weyrich was primarily interested in attacking other Republicans. He was quickly fired as Heritage president after his colleagues and donors realized what he really wanted. (Ironically, today's Heritage has a lot more in common with Weyrich than the people who dismissed him.)

Republicans of today find themselves at a similar juncture, largely thanks to the failures of the George W. Bush administration. Most observers see them as the product of his excessive loyalty to people who didn't deserve it (his FEMA head Michael "Brownie" Brown being but one example) and his listening to people who think that democracy could be forcibly imported into nations that didn't want it. Conservatives, however, decided that the reason Bush had so many disasters was that he wasn't conservative enough.

It was a false position but it didn't matter because without the White House, such thinking had no real policy implications. Now that Republicans are firing live ammunition, however, it matters that some of them want to point the gun at themselves.

House Speaker Paul Ryan appears to realize this to some degree. “We were a 10-year opposition party, where being against things was easy to do,” Ryan said at a news conference on Friday after he was forced to withdraw his Obamacare by a band of angry conservatives from the House Freedom Caucus, who effectively want to return to the piecemeal private-sector health care system that prevailed before the Affordable Care Act.

It’s unclear how long that transition might take for Ryan, who for a long time forced all his congressional employees to read the works of novelist and libertarian guru Ayn Rand. Given President Trump’s addiction to the reality distortion field of Fox News and talk radio, whether he can make the transition from opposition to governance is also in doubt.

Unfortunately, all of America may suffer the growing pains of conservatives as well.