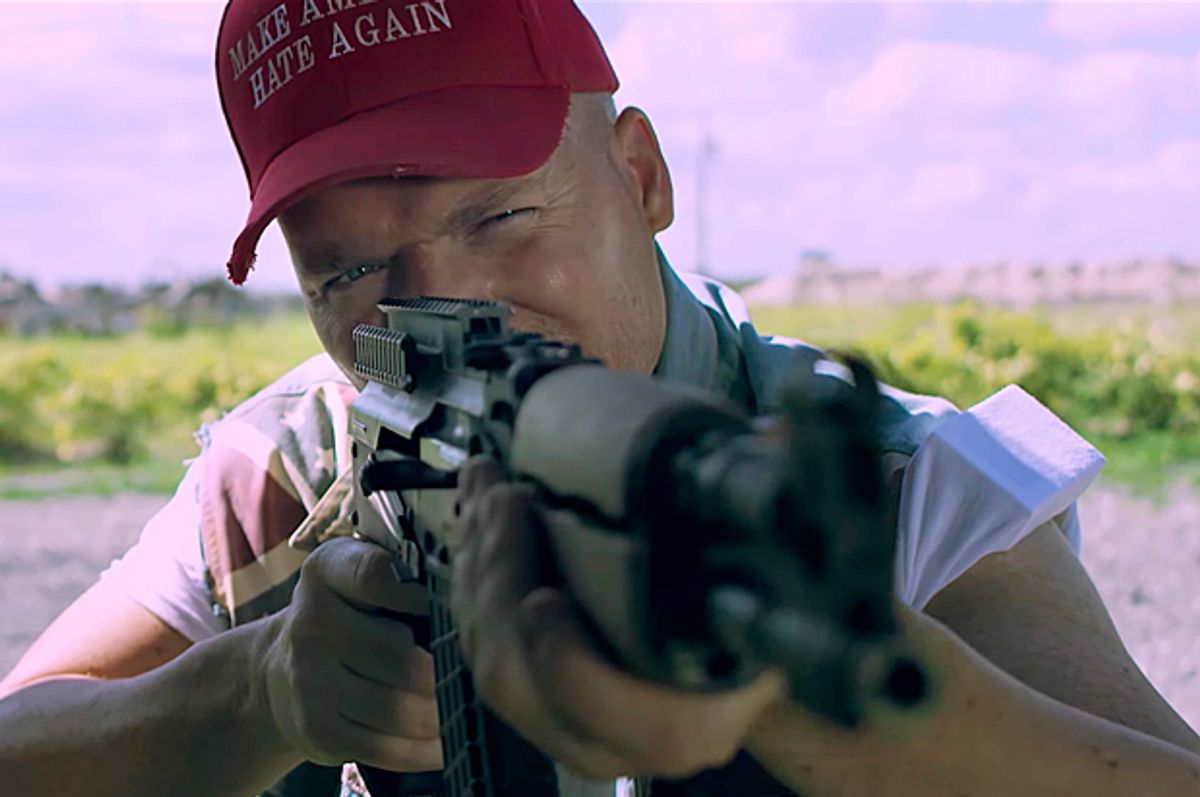 A still from "Tunnel Vision" by Kodak Black (YouTube/Kodak Black)
--

The ongoing beef between President Trump and virtually all of hip hop flared up a couple of weeks ago, when Snoop Dogg’s “Lavender” video, which depicts Snoop cartoonishly “shooting” a  Trump-like clown, drew a firestorm of reaction from right-wing media, Republican politicians and eventually Trump himself. “Can you imagine what the outcry would be if Snoop Dogg, failing career and all, had aimed and fired the gun at President Obama? Jail time,” Trump tweeted. Senators Cruz and Rubio joined in to attack Snoop, alongside Fox News, Breitbart and much of the rest of conservative media.

It should be noted that Snoop's “violent” imagery is made safe by literal clown makeup and a Wile E. Coyote-style gun that merely unfurls a flag reading “BANG” when fired. Whether it’s proper or not, there’s a safety to the imagery, even a jocularity. Nevertheless, the firestorm of reaction and defense spread from Breitbart to the New York Times and the Washington Post and onto cable news.

But while pundits and politicians debated the propriety of the video’s brief comic violence, a vastly more popular, far more radical and thought-provoking anti-Trump rap video was being watched by young fans at an unreal clip of 2 million views per day (despite all of the attention it’s received in the national media, Snoop Dogg's video has garnered a fraction of that). South Florida rapper Kodak Black’s video for his hit song “Tunnel Vision” is a full anti-white supremacy narrative, with Klansmen hung in quasi-effigy from burning crosses and a white man in a red Trump-style hat and Confederate flag jacket engaged in hand-to-hand combat with a black man under an upside-down American flag. The flag symbolism is further complicated and intensified when the black man grabs the flag during the struggle and winds it around the neck of the white man to strangle him in the final seconds before the video’s surprise ending.

Director Michael Garcia creates a narrative that suggests a contemporized Nat Turner rebellion, with a black man engaged in farm work that appears to be in some fashion coerced. As a white man in a red Trump-style “Make America Hate Again” hat approaches, the camera reveals that the farm on which the black man works is enclosed and labeled “hunting grounds.” The white man's denim jacket sports a Confederate flag. It’s a slave rebellion narrative melded with the human-hunting genre, à la Ernest Dickerson’s 1994 “Surviving the Game" — a film adaptation of the 1924 short story "The Most Dangerous Game" — in which an indentured man cast as prey attacks his captor and the two engage in a life-or-death struggle.

The video is dark and densely saturated with anti-Trump dread and fury — this violence isn’t silly or cartoonish. The gun in the video isn’t a clown gun; it’s an infamous Romanian Draco AK-47.

The video’s narrative through-line is intercut with performance shots filmed in a fiery, macabre pit. These are night shots lit only by burning crosses behind Kodak and his crew. A life-size figure in a Klan robe and mask dangles noose-bound from one of the crosses. The performers wear all black. One hides his face behind a black ski mask. The Jim Crow-era imagery combines with slave-era servitude and contemporary Trumpism to construct a critique of the current crisis that stretches through generations to link it to the centuries-long national history of anti-black violence and oppression.

I did mention that the video culminates with a white man in a MAGA-style cap getting choked out by a black man wielding an American flag as the weapon, right?

Did I mention that this is the biggest rap video of the year thus far? “Tunnel Vision” is the most intensely anti-Trump statement yet in hip hop, and it appears to be the most popular rap video on YouTube since last year’s smash hit “Bad and Boujee” by Migos.

With its relative tameness, then, it’s unclear why the Snoop video became the news event that it did, other than accessibility: Snoop is a legacy rapper much of the media class knows from childhood and adolescence. They’ve heard of Snoop Dogg. But young rap fans, those who power the genre at this point, don’t listen to Snoop. We might call Snoop “establishment rap” at this point — he's the rap equivalent of classic rock. This isn’t intended to be shade. Snoop is a legend, to be sure, but he’s not influential in 2017 — not like Kodak Black.

The Snoop video is, however, yet another entry into the virulent, effectively unanimous anti-Trump position hip hop artists have taken since the reality show star emerged as the Republican Party’s standard bearer. Eminem, A Tribe Called Quest, YG, Macklemore, Rick Ross, Run the Jewels, T.I., The Game, Jadakiss, Waka Flocka Flame, and many others have all issued vicious anti-Trump lyrics and sentiments. Some of the attacks are simple, like Snoop’s, and rely on straightforward antagonism and sometimes violent imagery. But the more intense attacks, like Kodak Black’s, are more complex and counterpose unity of black, white and brown Americans against Trump’s white nationalist-friendly politics.

YG’s “FDT” (standing for “F*** Donald Trump”), along with its remix with white rappers G-Eazy and Macklemore, issues a call for unity against the white supremacy of Trumpism. On the song’s original cut, Los Angeles rapper Nipsey Hussle interpolates a classic line from 2Pac: “It wouldn't be the USA without Mexicans / And if it's time to team up, shit, let's begin / Black love, brown pride in the sets again / White people feel the same as my next of kin.” A Tribe Called Quest’s “We the People” is the most comprehensively intersectional anti-Trump anthem, linking “black folks,” “Mexicans,” “poor folks,” “Muslims” and “gays” into a unified front against the president. The song’s title harks back to an essential Americanness at the heart of the rebuke.

So too does Kodak Black’s imagery, which suggests an Americanness vital to the anti-Trump defense as well. In the video’s tense ending, the MAGA hat-wearing attacker has now become mortally endangered, and the neo-Nat Turner character has grabbed the American flag, previously hanging upside down, to complete the struggle and kill his attacker. But it is at this moment, in the video’s final few seconds, that the violent struggle is abruptly interrupted by a young girl who yells, “Stop!” The two men, chests heaving, stop and look to her as an authority. It is here that the video becomes the most complex entry into hip hop’s anti-Trump chorus. The simple antagonism is gone, and the girl’s exhortation joins the enemies into a new unity. The viewer understands that the fight will not recommence; the girl’s wisdom will reign. There will have to be reconciliation.

Here, the video goes black and ends. The viewer is left without the certain satisfaction of, say, YG’s anthemic refrain, “F*** Donald Trump!” It’s now a question: “F*** Donald Trump?” The video, which views for the most part like an Antifa training video, is, in the end, much more challenging. There is a dim, distant light at the end of “Tunnel Vision.”