If Neil Gorsuch believes Obergefell v. Hodges is not settled law that's a problem for the LGBT community 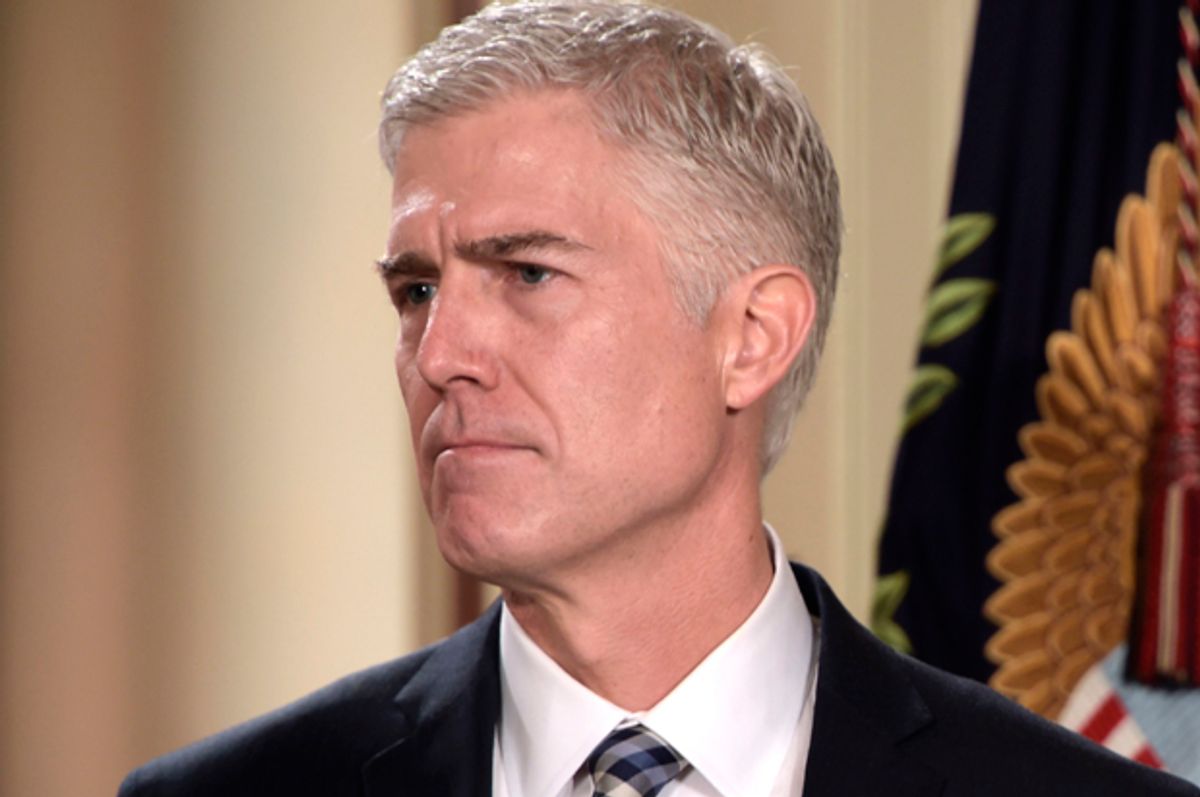 Neil Gorsuch believes LGBT folks are “people,” but does he believe they deserve the same rights as everyone else?

That question was central to Democratic interrogation of the 49-year-old judge tapped by President Donald Trump to fill Antonin Scalia’s vacant spot on the U.S. Supreme Court. During his testimony, the staunchly conservative jurist was asked by Sens. Dick Durbin and Al Franken how he would rule on marriage rights for same-sex couples from the bench. Echoing Trump’s sentiments on the issue, Gorsuch referred to Obergefell v. Hodges, the high court's 2015 ruling that established marriage equality, as “absolutely settled law.” That would suggest that, if confirmed, he would not overturn the decision if given the opportunity.

“What about them?” Gorsuch replied when further asked for  his opinions about LGBT people. “They're people.”

Those comments should be a breath of fresh air during a political season when LGBT rights have constantly been under attack. But what Gorsuch said next has deeply concerned gay rights advocates, who argue that his confirmation could pose a grave threat to equality. Lambda Legal and the Human Rights Campaign have opposed his nomination.

After Franken pressed Gorsuch on his views about marriage between same-sex couples, the judge, currently serving as an appeals judg for the the 10th Circuit, said there are open questions about how Obergefell v. Hodges should be applied. “There’s ongoing litigation about its impact and its application right now,” said Gorsuch, who opposed legal recognition for LGBT couples in his 2004 dissertation. (His adviser at Oxford University, John Finnis, infamously compared homosexuality to bestality.)

If Gorsuch believes that the ways the Obergefell ruling could be applied are not as “settled” as the decision itself, that could affect several critical U.S. cases. The Texas Supreme Court is currently hearing oral arguments in Pidgeon v. Turner; two Houston residents sued the city because they believe that their taxes shouldn’t fund partner benefits for same-sex couples. After originally declining to hear that case last year, the court reversed its decision after a sustained lobbying effort from Texas Lt. Gov. Dan Patrick, Gov. Greg Abbott, and Attorney General Ken Patton.

“That case should not be taken seriously,” said Jenny Pizer, the law and policy director for Lambda Legal. “It is before the court because of a campaign pressuring the court to consider taking the case.”

Although Pizer called legal arguments denying benefits to married same-sex couples “fringe” opinions, Texas isn’t the only state debating whether legally wedded LGBT people deserve the same privileges as other couples. A case known as Smith v. Pavan, which was decided by the Arkansas Supreme Court last year, denied some same-sex partners the right to be on their newborn child’s birth certificate. Three lesbian couples sued the state’s Department of Health when the agency wouldn’t allow second parents (the individuals who did not physically give birth) the ability to be recognized as their infant’s legal guardian.

The court's ruling ended up favoring the Department of Health.

Sarah Warbelow, the legal director for the Human Rights Campaign, said the Arkansas court wanted to “draw a distinction between access to a marriage license and then everything that flows from marriage.” While that verdict has been appealed to the Supreme Court, there’s no word on whether the nation’s highest court will take up the case.

“It’s a tremendous concern for the entire LGBT community if Judge Gorsuch does not consider all these rights, benefits and obligations to be a firmly settled area of law,” Warbelow added.

Warbelow, who testified against Gorsuch's nomination before Congress last week, believes that the judge is “actually more conservative than Scalia.” While she said Scalia was “no friend to the LGBT community,” Warbelow pointed to a handful of favorable decisions he made concerning queer people. In McCauley v. Sundowner Offshore Services, Scalia sided with the majority, ruling that laws prohibiting sexual harassment in the workplace still apply if the parties involved are of the same gender. Warbelow said that Scalia was “interested in the plain language of the statute” or what one could reasonably determine from how a law is written.

The problem is that Gorsuch is a strict originalist. As Warbelow explained, this means he believes that laws “should be read based upon what the drafters of the statute understood the statute to mean.” This is a problem when it comes to legal benefits for same-sex couples, as such privileges weren’t initially considered with LGBT people in mind.

Pizer said, though, that following the Supreme Court’s decision in Obergefell v. Hodges, any debate on that subject should be “moot.”

“The Supreme Court ruling makes clear that decision was not just about marriage licenses,” Pizer said. “It was about the full range of legal rights and social benefits that come from being married. The collection of cases that together carry the name ‘Obergefell’ carried with them a broad range of harms. That litigation was not about marriage licenses or a technical legal status isolated somehow from all the things that come with being married.”

Jim Obergefell, the plaintiff whose name graces that 2015 case, was not seeking a license recognizing his relationship with John Arthur, Obergefell’s partner of 21 years. Arthur died of complications from amyotrophic lateral sclerosis in 2013. John’s widower wanted to be listed on his longtime love’s death certificate.

Now almost two years after Obergefell won that right, Pizer asserts that it’s “generally understood” that marriage should “mean the same thing for everyone,” whether it's the right to health insurance benefits or inheritance. “That’s what the Supreme Court said in Obergefell” decision, she said. “Most of the country understands that.”

To Warbelow, the Obergefell ruling is likely safe because of a “five-person voting block” on the Supreme Court, since the same judges whose votes led to marriage equality two years ago are still on the bench.

Some gay rights advocates are concerned, however, about cases involving “religious liberty.” In his majority opinion in the Obergefell case, Justice Anthony Kennedy wrote “to reassure those who oppose same-sex marriage that their rights of conscience will be protected,” although his statement does not settle how faith-based objections will be dealt with. “Justice Kennedy signaled there might be times he thinks people can discriminate,” Warbelow said.

That could pose a problem in a potential debate over the legality of Mississippi’s House Bill 1523, which was aimed at permitting  conscientious objectors (to marriage equality) to deny service to LGBT people in the name of religion. The legislation prohibits that state from taking action against an individual who, for instance, fires an employee for being in a legally recognized same-sex union or who rejects a lesbian couple’s application to rent an apartment. HB 1523, which was signed into law in March 2016, additionally called for allowing adoption agencies to cite a conflict of faith and deny LGBT couples a child. In July this law, however, was struck down by U.S. District Judge Carlton Reeves, who argued that HB 1523 violated the equal protection clause under the 14th Amendment. That clause promises all Americans “equal protection of the laws.”

Should a challenge to this case be heard by the Supreme Court, there’s no indication that the firewall blocking discrimination against LGBT people would hold fast. As a member of the 10th Circuit Court of Appeals, Gorsuch ruled in favor of the right to faith-based objections in Hobby Lobby Stores v. Sebelius. That case concerned whether the retail chain could legally deny employees contraception coverage as part of its health care insurance plan. Hobby Lobby won that decision, a ruling that was upheld by the Supreme Court.

“It sets up the idea that people get to have these little bubbles around themselves and pick and choose which laws to follow based on their religious or moral beliefs,” Warbelow said. “If you follow that line of reasoning, anyone who acknowledges a same-sex couple in any capacity is violating their religious beliefs.”

Even if a Supreme Court with Gorsuch on the bench upholds Obergefell v. Hodges, the high court could still provide a pathway to discrimination against LGBT people. The conservative judge will face continued questions about his beliefs as Congress considers his Supreme Court nomination.