How to dominate the charts and alienate no one: Lessons from Drake’s “More Life”

Artists are gaming the system. But is that bad for music? 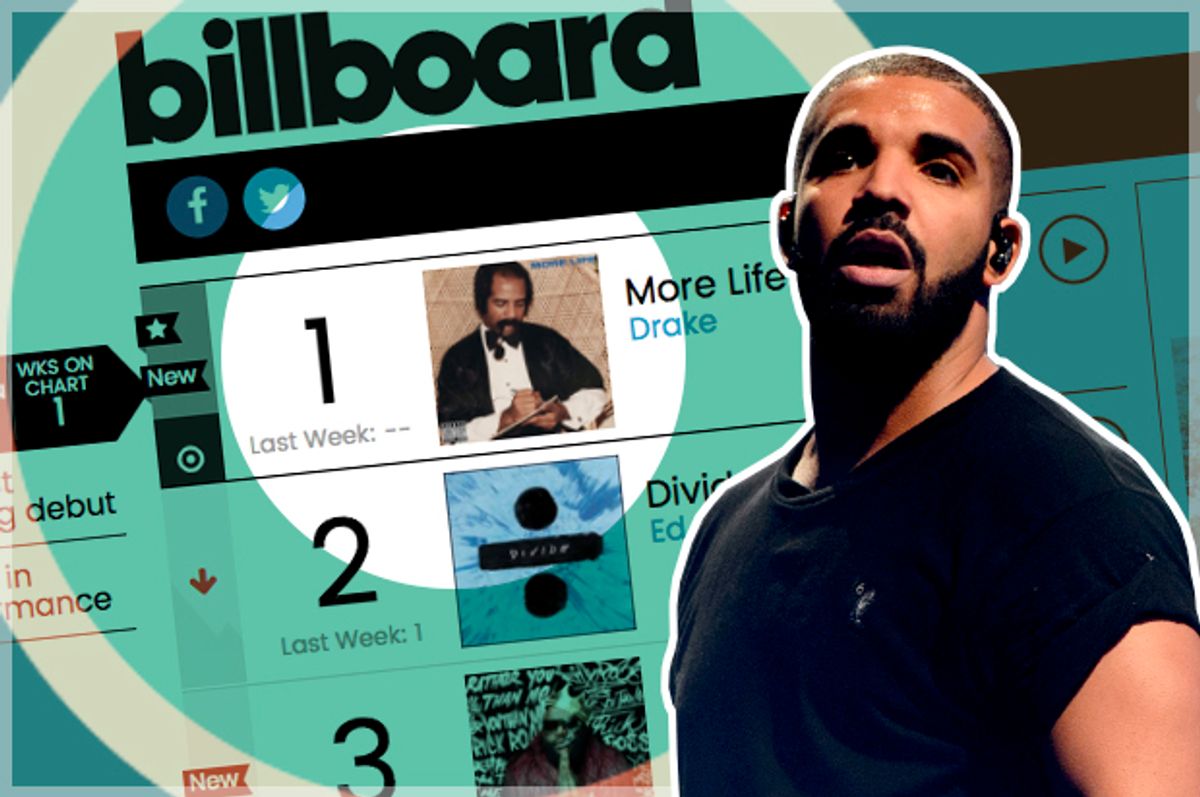 Drake made history this week in what may have seemed like history making in a number of ways. Following the release of “More Life,” a collection of songs he dubbed a mixtape, Drake set the record for the most Hot 100 debuts in one week (21); the most simultaneously charted Hot 100 titles in one week (24); the most charted titles among soloists in the Hot 100’s history (154); and the most streaming equivalent albums sold (163,000, the equivalent of 245.1 million song streams).

While impressive, Drake’s accomplishments come in a period ripe for record setting. This month, Future became the first artist to have two albums debut at No. 1 on the Billboard 200 chart in successive weeks; Nicki Minaj gained the most total appearances on the Billboard Hot 100 for a female artist; and Ed Sheeran set the record for the most Spotify streams in a single week (besting a mark set by the Weeknd four months ago).

The music records set in 2017 will probably be looked back on the way major league hitting records set in 1998 are viewed in hindsight — with an asterisk.

Are musicians cheating? Technically, no. And certainly not the way sluggers did in the late 1990s. But they are gaming a system in flux.

In 2014 Billboard changed the rules governing its charts to incorporate streaming. Artists could sell an album the old-fashioned way or they could accumulate “album sales” via 1,500 song streams from streaming services such as Spotify, Tidal and Apple Music.

The rule change reflected modern listening habits, and it encouraged artists to rethink their conception of an album and release strategy. Whereas in the CD era a fan might not have bought two albums from the same artist in consecutive weeks, in the streaming era, a time when all albums are accessible through subscription, one album begets momentum for the next.

And then there is the case of Drake.

Drake’s record-setting performance is as much a testament to his savviness as to his popularity or even his artistry. In almost every technical way “More Life” resembled an album — the exception being that a physical copy hasn’t yet been released. But calling “More Life” a playlist signaled how Drake conceived of the project (as a menagerie of vibes and geographies rather than as a cohesive narrative) and how the listener was meant to consume the project (fully, but casually). It gave Drake permission to pack the project with 22 songs. On a traditional album that might have felt overwhelming and dense but, in the context of a playlist, 22 songs is short and fun.

The genius of loading a project with a lot of songs — and especially a lot of songs that are distinct, digestible and danceable — is that more songs means more to stream. More high-profile names (Kanye, Young Thug, Quavo, Skepta) appear on “More Life” than appear in an “Expendables” movie. And there’s a genre for everyone: grime, dancehall, trap and vintage Drake. All of which makes it ironic that “More Life” has been showered with critical praise.

The success of “More Life,” in a way, illuminates what a cynical project it was: It was built to satisfy modern listening habits and modern success metrics. And yet, it does both of those things brilliantly and has an ear on the pulse of the world. Gaming the system doesn’t have to mean cheating the listener. Sometimes it’s just fun to watch superstars hit home runs.