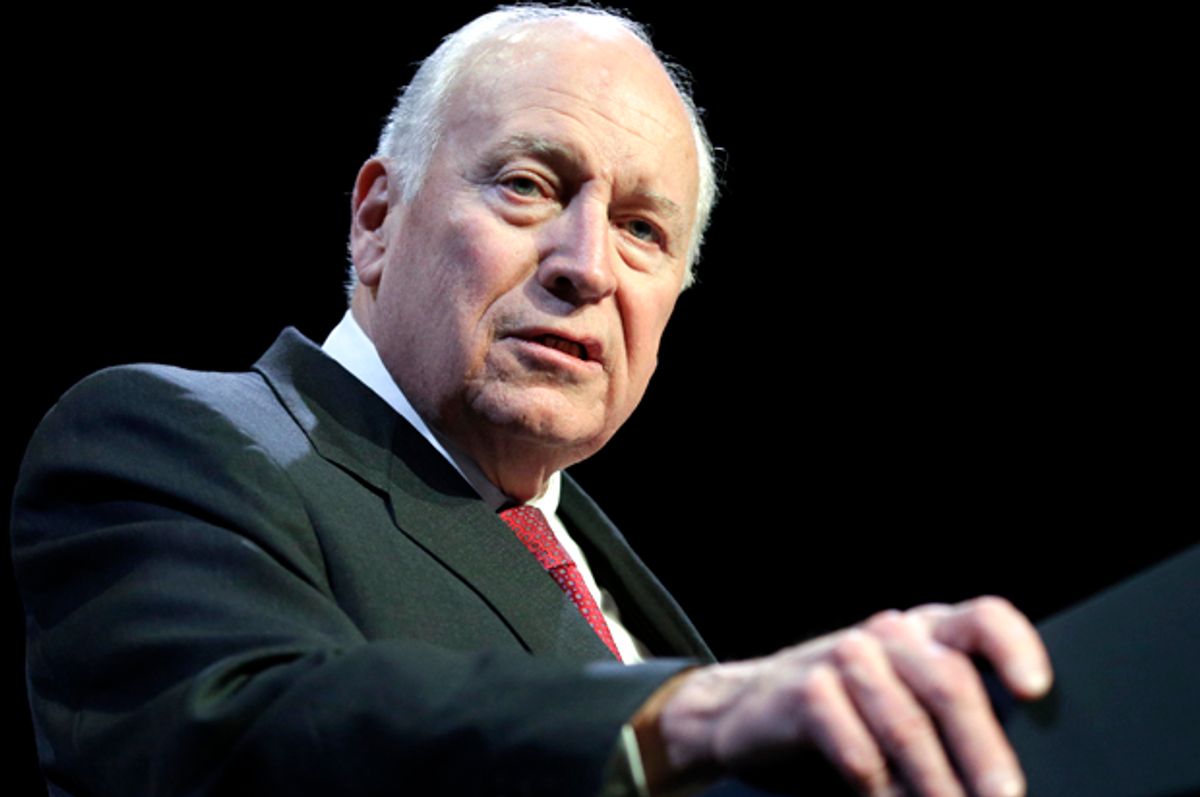 Former Vice President Dick Cheney, one of the few elite Republicans who endorsed Donald Trump for president early in the 2016 campaign cycle, is speaking out against the Russian government for its alleged involvement in American politics.

In a wide-ranging foreign policy speech at a business summit in New Delhi, Cheney argued that Russian President Vladimir Putin “took his capabilities in the cyber area and used it to try to influence our election.”

As Cheney told attendees of the Economic Times’ Global Business Summit,  “In some quarters, that would be considered an act of war.”

The former architect of the second American war in Iraq prefaced his remarks by saying that it was incorrect to think that “somehow the election of President Trump was not legitimate.”

While noting that he “didn’t speak for anybody else,” Cheney cautioned other countries to understand that Russia’s alleged activities would not be taken lightly.

“I would not underestimate the weight that we as Americans assign to the Russian attempts to interfere with our internal political processes,” the he said.

American intelligence services have repeatedly accused the Russian Federation of originating a number of hacking attacks against Democratic Party officials in the United States. No evidence of these attacks has been publicly released, although President Trump no longer challenges the allegations, indicating he likely believes them to be true. Numerous private-sector analysts have produced evidence showing the hacks were conducted by Russians as well. Naturally, the Russian government has strongly denied the accusations.

Trump's opponents have also alleged that some of his former associates and employees, such as former campaign manager Paul Manafort and longtime friend and adviser Roger Stone, have undisclosed ties to the government of Russia.

Cheney’s claim that any Russian attempts to influence the election were essentially acts of war matches the words of some elected officials.

In December Republican Sen. John McCain of Arizona told a Ukrainian television channel, "When you attack a country, it's an act of war.” McCain added, “We have to make sure that there is a price to pay” for countries engaging in cyberattacks.

Even some Democrats have echoed these claims.

In a hearing earlier this month when FBI Director James Comey disclosed that his agency is investigating possible coordination between Trump campaign officials and the Russian government, Rep. Jackie Speier, D-Calif., called the alleged hacking “an act of hybrid warfare.”

Sen. Ben Cardin of Maryland, the ranking Democratic member of that chamber’s Foreign Relations Committee, has claimed that the alleged Russian actions amounted to a “political Pearl Harbor.”

The increasingly bellicose rhetoric coming from both parties toward Russia has alarmed some progressives. In an unsigned January editorial, The Nation cautioned liberals and their sympathizers to be wary of Russian scandal mongering peddled by former allies of failed Democratic presidential candidate Hillary Clinton. (These comments closely echo remarks made by Nation editor Katrina vanden Heuvel in a recent video interview with Salon's Andrew O'Hehir.)

There’s a striking cognitive dissonance at work here: Liberals who have traditionally been wary of the national-security state and justifiably suspicious of its claims seem to have become its most vociferous supporters. . . .

Nevertheless, the current debate, such as it is, has been plagued by a disturbing trend — and it’s one that we’ve seen before: If you express doubts about whether the Russian government hacked the election or question whether the hacking rose to the level of undermining our electoral system or simply demand evidence for this tremendously significant allegation (some people making it allege “warfare” by a nuclear-armed country), you are labeled a Trump apologist, a Putin puppet or both.

Since Donald Trump’s victory last year, perhaps those who have been most disrupted by the new presidency have been the foreign policy hawks commonly referred to as “neoconservatives.”

Almost without exception, they adamantly opposed Trump during the primaries and some even openly favored Hillary Clinton in the general election. Now that Trump is in the White House, they have found themselves frozen out of power for the first time in their movement’s 40 years of existence.

Is it possible that hyping allegations of Russian meddling might be the way for neocons to work their way back into the Democratic Party, which many of them left a generation ago?

In a lengthy piece about neconservatives in the Trump era for the Jewish website Tablet, Chris Pomorski argued that some of them appear to be trying to ingratiate themselves to liberals with anti-Trump rhetoric.

In a last twist, many neoconservatives seem to be intent on outdoing the liberal media types they once disdained — in their disdain for Trump. Max Boot, who frequently launches blistering personal attacks on Trump and on his rumored ties with Russia, recently shared a video comparing the leader of what has long been his party unfavorably to Barack Obama; two days earlier Bill Kristol needled Trump with a tweet reminding him of Hillary Clinton’s margin in the popular vote. Eliot A. Cohen has meanwhile found a receptive audience with the editors of The Atlantic, which recently published two essays by Cohen on its website — a forum otherwise home mostly to left-leaning viewpoints.

It is tempting to see the counter-intuitive alliance of the neocons and their former tormentors in East Coast media outlets as a function of class — a bipartisan solidarity of the embattled urban elite. As [Jacob] Heilbrunn points out, though, the situation isn’t unique to the political moment. “The neocons are gifted polemicists and adept at forging alliances,” he wrote in an email. “They have always been prepared to attack the left or right. Patrick Buchanan, the lineal predecessor of Trump, in terms of style and policy, was frequently the target of neocon brickbats.” In the 1990s, he added, neocons aligned themselves with liberal hawks on interventions in Iraq and Bosnia.

Faced with this unexpected political realignment, it may be time to ask, Is Vladimir Putin becoming the new Saddam Hussein?