Hope in the heartland: Ohio could be second GOP state to pass law preventing LGBT people from being fired 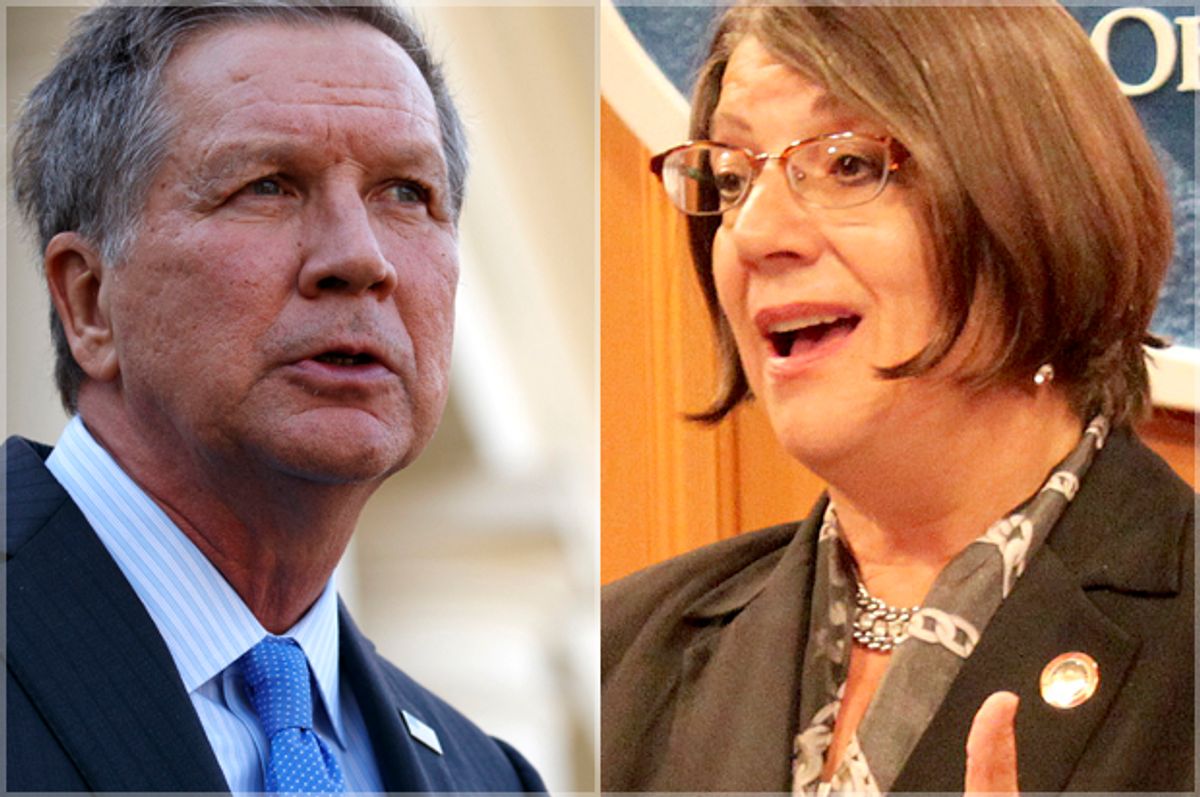 Columbus, Ohio struck down conversion therapy on Monday night when its City Council voted unanimously to pass an ordinance banning the discredited practice. Also known as “ex-gay therapy” or “reparative therapy,” Columbus is just one of a handful of municipalities across the United States to ban mental health professionals from seeking to change the sexual orientation or gender identity of LGBT youth.

The capital, however, is actually the third city in Ohio to outlaw conversion therapy in the past two years. Cincinnati became the first city in the U.S. to prohibit “pray the gay away” clinics back in 2015. Toledo followed suit in February.

The decision by the Columbus City Council is the latest in a surprising wave of legislation passed in support of the LGBT community in Ohio, a state with a Republican governor and a GOP-controlled legislature. The Buckeye State could become just the second Red State in the nation to pass nondiscrimination protections to prohibit bias in housing and employment against LGBT people. As Arkansas, Tennessee, and Texas move to the extreme right on LGBT issues, Ohio offers a tiny glimmer of hope from the heartland.

Rep. Nickie Antonio, the state’s first openly gay legislator, introduced the nondiscrimination bill last Thursday, and Gov. John Kasich signaled that he could be persuaded to back it.

“I don't want anybody to be discriminated against because they happen to be gay,” Kasich said when approached by press last week. “I don't favor discrimination in any way. I haven't heard much about this but if it's happening we have to deal with it.”

Although nondiscrimination legislation has failed every previous time it’s been introduced, Antonio said that her colleagues have signaled a potential for bipartisan cooperation. Earlier this year, the Ohio General Assembly tabled the “Pastor Protection Act,” a bill that would exempted clergy from performing same-sex weddings. Republicans have wondered if her bill might strengthen protections for people of faith while upholding LGBT equality.

Antonio explained that her proposed legislation, called the Ohio Fairness Act, already does that. “Our bill upholds the religious exemptions that are already in the Ohio Revised Code,” said the Lakewood Democrat, who is in her final term as a House representative. “Faith leaders already have those protections in place right now. It’s their First Amendment right.”

Ohio is currently one of 28 states in the nation where it is perfectly legal to be fired for being LGBT. But in recent years, cities across the state have moved to either pass affirming legislation or strengthen their existing statutes. While striking down conversion therapy in February, Toledo also enumerated equal access for transgender people in its public accommodation laws. Although those protections already existed in its nondiscrimination ordinance, the trans inclusions weren’t specifically spelled out.

Nick Komives, Executive Director of Equality Toledo, said there was almost no opposition to the City Council decision, which was approved by eight Democrats and four Independents. One community member who attended council meetings voiced concern that the updated ordinance would allow women and children to be targeted by sexual predators.

Komives claimed the council “wasn’t having it,” and quickly dismissed the objection.

“We’ve had protections for trans people — including bathrooms — since 1998, and we’ve had zero incidences of rape or violence as a result of that ordinance,” said Komives, who explained that the same was true in other localities that have passed trans-inclusive public accommodation laws. Of the more than 200 city councils and state governments that have taken the same steps as Toledo, not a single one has seen a bathroom rape epidemic as a result.

Sixteen cities in Ohio currently offer trans-inclusive public accommodations. Grant Stancliff, the Communications Director for Equality Ohio, said that last year Cleveland moved to “plug this little hole” in its existing nondiscrimination ordinance. Although the City Council had already passed a policy that prevented workers from being fired solely on the basis of their identity, it left out equal bathroom access for trans people. Three days before the Republican National Convention, the Council voted to fix the discriminatory blindspot.

“After HB 2, it became clear that if you have this kind of language on the books, people are going to take notice,” Stancliff said.

In 2016, North Carolina passed House Bill 2, a law which forced trans people to use the bathroom that corresponds with the gender on their birth certificate when visiting schools and government buildings. Stancliff argued that the fallout over that bill has “played a large part” in encouraging local politicians to pass pro-LGBT legislation. A recent report from the Associated Press — which the news outlet claimed was a conservative estimate — claimed that the Tar Heel State would lose $3.76 billion as a result of the controversial law.

The NBA announced that the state would forfeit hosting the All-Star Game while HB 2 remains in effect, while companies like PayPal and Deutsche Bank moved jobs elsewhere.

“When PayPal pulled out of North Carolina,” Stancliff said, “that was a pretty big incentive for cities to say, ‘Hey, do we want large employers who might be planning an expansion to Ohio to move somewhere else because we don’t have inclusive policies on the books?’”

Youngstown passed a nondiscrimination ordinance in January, and Akron is set to be next.

Even though over a dozen cities have already affirmed equal access in housing and employment, Stancliff said that passing a statewide bill remains a top priority for LGBT advocates. Currently, he claimed that 80 percent of state residents can still be terminated from their jobs for having a photo of their legally wedded spouses on their desk. This population includes queer and trans people who are employed in suburban and rural areas.

“You can live in a suburb of Cincinnati, and work in the city,” Stancliff said. “While you’re at work, you’re a full citizen but halfway into your commute home — when you cross that city line — you lose all your rights.”

A 2013 report from the Pew Research Center found that more than one-fifth of LGBT respondents had experienced discrimination from employers. Kira Esperante, a transgender woman who lives in Cincinnati, claimed that she was let go from her law firm in 2009 after she began to transition at work. One day, her bosses pulled her aside and said that the changes in her appearance weren’t “good for the law firm’s image,” as Cincinnati’s WCPO reported. Esperante has struggled to find another position in the eight years since.

Under the current system, it can be difficult to pursue cases of employment discrimination even in cities with protections. The Ohio Civil Rights Commission doesn’t recognize LGBT people as a suspect class, so there’s no real enforcement mechanism in place.

“Because it’s not written into the law, nothing gets done,” Komives said. “The teeth around nondiscrimination comes at the statewide level for us.”

Research shows that a wide majority of Ohioans aren’t aware that it’s possible for fire someone for being queer or transgender, but when they learn the reality, they widely support laws to prevent cases like Esperante’s. Seventy percent of registered voters in the Buckeye State are in favor of LGBT-inclusive nondiscrimination protections, and there’s hope Kasich will join them. The governor, a self-described moderate, famously said during the 2016 election that he would support his daughters if one of them came out as a lesbian.

But while Trump has emboldened hate across the U.S., Antonio said that the barrage of pro-LGBT support in Ohio’s cities shows another way is possible.

“It’s because people are standing up,” Antonio said. “Twenty or 30 years ago, gay people were first invisible and then they were told they weren’t wanted. There was something wrong with them. What’s happening right now is that members of the LGBT community are saying that we’re part of the fabric of our communities, and we should be embraced.”

Note: Kasich’s press team declined to comment on the nondiscrimination law, stating that the governor doesn’t “weigh in on pending legislation.”