“It is pathetic”: Bernie Sanders slams Trump after ExxonMobil urges White House to abide by Paris climate accord 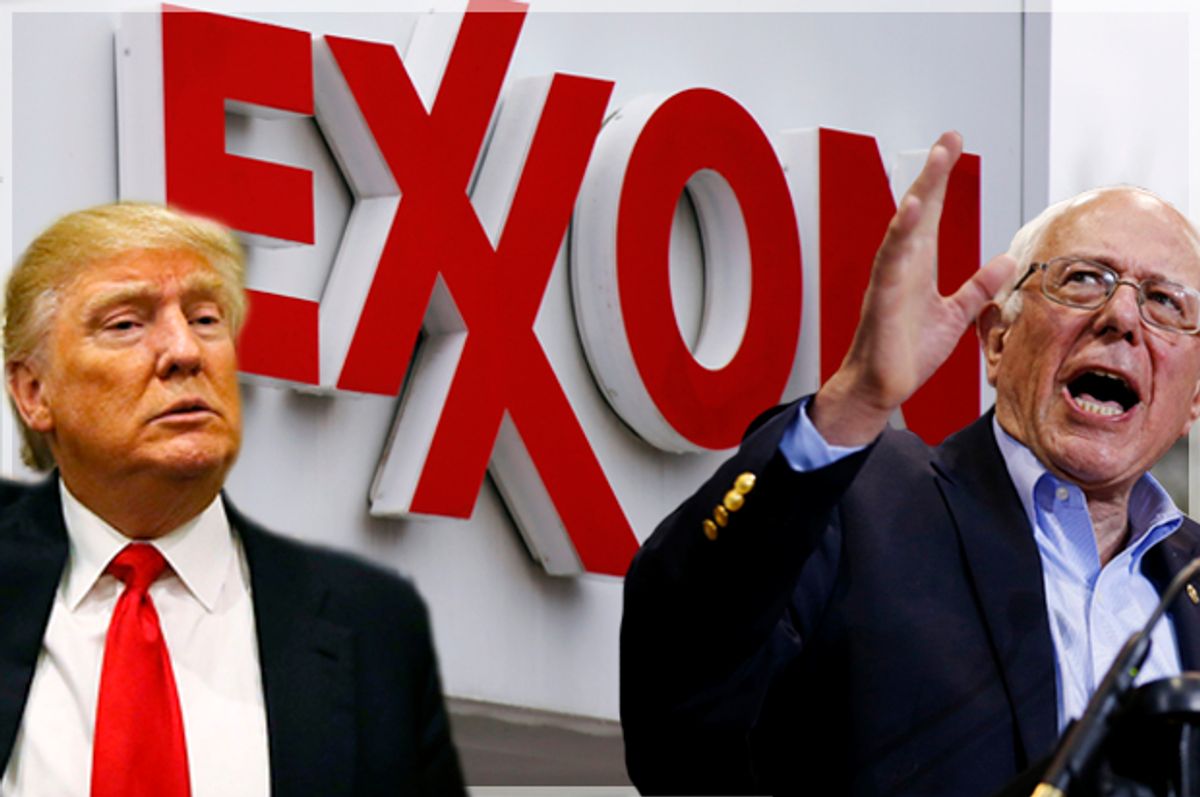 Vermont Sen. Bernie Sanders slammed President Donald Trump on Wednesday after energy giant ExxonMobil asked the White House to not yank the U.S. from participation in the landmark Paris Agreement.

The historic international climate deal has been a top target of Trump, who appears hell-bent on dismantling his predecessor’s legacy. When former President Barack Obama signed the 2015 deal forged between nearly 200 countries, he had suggested that the Paris agreement may one day be seen as the moment the world decided to save the planet.

Under the Paris accord, the U.S. agreed to reduce its carbon emissions 26 percent to 28 percent below the levels emitted in 2005. But on Tuesday Trump signed an executive order asking his Environmental Protection Agency chief to take action toward unraveling Obama’s Clean Power Plan, which aims to lower emissions of greenhouse gases that warm the planet. According to Bloomberg, Trump’s order lays out “a broad blueprint for the Trump administration to dismantle the architecture that former President Barack Obama built to combat the phenomenon.”

As Trump’s White House seeks to unravel Obama's greenhouse gas commitments, a most unlikely ally of the largest climate change compact has emerged to lobby the new president.

The Paris accord is “an effective framework for addressing the risks of climate change,” a senior Exxon official wrote in a letter to the president’s special assistant for international energy and the environment. “We welcomed the Paris Agreement when it was announced in December 2015 and again when it came into force in November 2016,” Peter Trelenberg, Exxon’s manager for environmental policy, wrote to the White House.

In the March 22 letter the official from the energy giant, which currently is under investigation for its accounting practices related to climate change, argued that the Paris Agreement presents an opportunity to support greater use of natural gas. “It is prudent that the United States remain a party to the Paris agreement to ensure a level playing field, so that global energy markets remain as free and competitive as possible,” Trelenberg wrote to the Trump administration.

Reacting to the somewhat surprising news from Exxon, Sen. Sanders called it “pathetic that the largest oil company in the world understands more about climate change than the president of the United States.” News reports have raised questions whether Exxon concealed the impact of fossil fuels on climate change years before the issue made global headlines.

While Trump has little to gain from initiating the arduous, four-year legal process required to exit the Paris Agreement, he vowed repeatedly during his presidential campaign to “cancel” the climate agreement forged by Obama.

“My administration is putting an end to the war on coal,” Trump said before he signed the executive order on Tuesday.

Trump's administration, however, may be more divided about the Paris Agreement than his actions convey. His secretary of state, former Exxon CEO Rex Tillerson, indicated last week that he would support the Paris Agreement with some relaxations and adjustments. Tillerson believes that staying with the climate deal could help the country diplomatically, according to The New York Times, while Trump’s  senior adviser, Stephen Bannon, is pressing the president to officially pull the U.S. from the accord.

Former Vice President Al Gore has suggested that Trump will ultimately agree with Exxon, pointing to reports that Ivanka Trump, the first daughter who has an official role at the White House, will make climate change one of her “signature issues.”