Scarlett Johansson and the perils of white feminism

By starring in "Ghost in the Shell," Johansson shows that her intersectional feminism stops at her bottom line 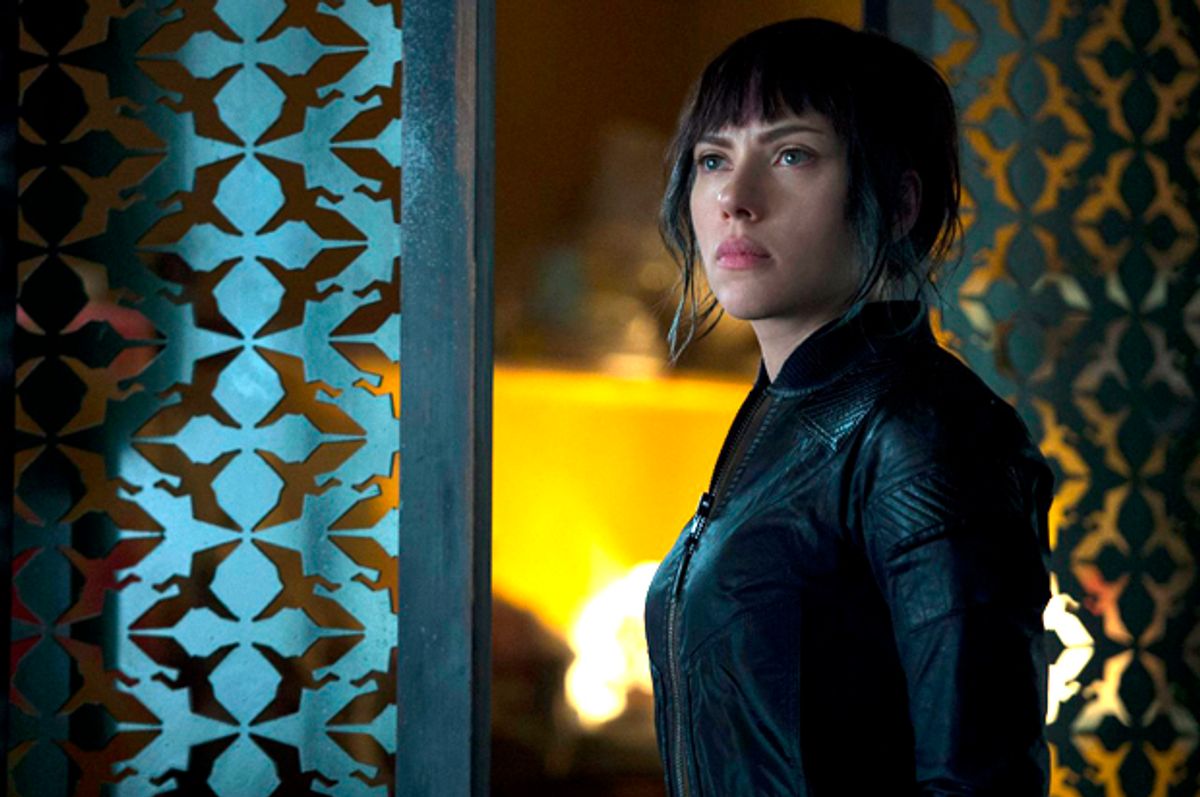 Scarlett Johansson in "Ghost in the Shell" (Paramount Pictures)
--

Ever since Donald Trump was elected, well-meaning white liberals have made their feelings known about where they stand in today’s divisive, bigoted climate: They are allies. They will wear safety pins and show up to at protests in order to show people of color, LGBTQ+ folks and other underrepresented groups that white people stand with them, too.

Scarlett Johansson is one of those people. In January she was one of the speakers at the Women’s March on Washington, an event coordinated by women of color and whose platform emphasized intersectionality. At the march, she addressed Trump, saying, “I ask you to support all women and our fight for equality in all things, including the fight to be recognized as individuals.”

It’s a lovely sentiment, one that is worth supporting. Except I’m not sure she really means it.

A few weeks later in an interview with Marie Claire, Johansson commented on the “Ghost in the Shell” whitewashing controversy. When asked whether she felt the charge of whitewashing with regard to her playing a Japanese character was fair, she answered, “I certainly would never presume to play another race of a person. Diversity is important in Hollywood, and I would never want to feel like I was playing a character that was offensive.”

And then she pivoted: “Also, having a franchise with a female protagonist driving it is such a rare opportunity. Certainly, I feel the enormous pressure of that — the weight of such a big property on my shoulders.”

That’s some A-list level evading of the point. Because guess what’s even rarer than a white woman leading an action film? An Asian woman or a woman of color leading any kind of film.

To recap: The role Johansson is playing in the adaptation of the Japanese anime property “Ghost in the Shell,” the Major, is in the source material a Japanese cyborg named Motoko Kusanagi. Apparently in this adaptation, which is still set in Japan and features Johansson shooting down random Asian extras, the character at one point was a Japanese woman who was then placed inside a white body. According to Nerds of Color contributor Valerie Complex, who saw an early preview:

“[I]t looks the Major is originally Japanese. Let me explain. It appears that the character is in a nearly fatal accident. This accident causes her body to be rendered useless, but her brain is the only thing that can be salvaged. So this Japanese woman whose brain is recovered is transferred into a body, or Shell, that just happens to be Scarlett Johannson’s new body. Now her name is ‘Mira.’”

Knowing this, I somehow think Johansson missed the point of the Women’s March and what it means to be a white ally during a time when being a racist is suddenly mainstream again, thanks to the Reddit wet dream living in the White House. In taking a role that was originally written as a Japanese character, Johansson knowingly took an opportunity away from an Asian actress. She is just the latest Hollywood actor playing an Asian person on screen and to make a good amount of money doing so.

But Johansson is not the only white actor missing the point of white allyship. While the casting of a white man, Finn Jones, in the title role of the widely panned Netflix adaptation “Iron Fist” didn't break with the tradition of the character, it also missed an opportunity to recalibrate the property for a 21st-century audience by casting an Asian lead. Tilda Swinton (of “Dr. Strange”) is another.

Last year Swinton made the same deflection of charges of whitewashing the role of the Tibetan-born Ancient One during her email correspondence with Margaret Cho, saying, “I’m a Scottish woman of 55 who lives in the Highlands. There’s precious little projected on contemporary cinema screens that means a great deal to my life.”

When faced with charges of racism, both Swinton and Johansson have deflected, saying, in essence, “It’s hard to be a white woman too!”

Want to know what’s harder? Being a woman of color. Where you will get paid less than white men and white women for doing the same job, and where you will get fewer opportunities because you have extra melanin in your skin.

Those excuses are peak white feminism, and it’s getting tiresome. What it really shows is that Swinton and Johansson are allies when it’s convenient — when it doesn’t affect their bottom line.

And yet, they do not need more money. Johannsson is already the Black Widow, with billions of Marvel money in her pocket, and killed Asians already in “Lucy.” Swinton has Disney money, and can sleep in a glass box and people will still pay to see her. Who is paying to see Margaret Cho or Michelle Yeoh sleep in a glass box? Well, I would.

What these white actors fail to understand that by virtue of being white in Hollywood, they automatically enter the field with more advantages than their POC counterpart. According to a recent study by UCLA’s Ralph J. Bunche Center for African American Studies, people of color make up almost 40 percent of the U.S. population but occupy 13.6 percent of the lead roles in films. And the study also found that more diverse films made more money in the global box office. (It's almost like people of color in other countries don’t care about all-white films, either. Shocker!)

Actors of color automatically receive fewer opportunities to showcase their skills. As Viola Davis famously said when accepting her Emmy for "How to Get Away with Murder," “the only thing that separates women of color from anyone else is opportunity. You cannot win an Emmy for roles that are simply not there.” So many actors of color have echoed those comments and have expressed the pains of being typecast, of having to play the maid and the terrorist but never the hero in a major Hollywood picture.

That is why, when Asian stories are whitewashed and when white actors play roles that could have been cast with Asian leads, there is a backlash. Because white actors — performers who already have leading roles and buckets of money under their belt, even — are taking money away from actors who have fewer opportunities. Imagine the Asian actress who could have made her big break in “Ghost in the Shell,” who needed that chance to prove herself? (Kind of like when Johansson got the opportunity to prove herself in another Japan-set film, “Lost in Translation.”)

By not understanding that and by taking roles that they know are for Asian women, Swinton and Johansson are basically saying, “Women of color, we support you, until it affects our wallet.” They are throwing women of color under the bus to appease white men. And that is not allyship.

Allyship is uncomfortable and it’s inconvenient. It’s having the conversation you don’t want to have with your racist uncle. It’s standing up when you witness harassment on the subway. It’s standing up at the Grammys and acknowledging that you don’t deserve the record of the year award and that it belongs to Beyoncé. (White women, be more like Adele!)

Or they may not want the competition. In which case, they can take off their safety pin and pussy hat. We see them for who they really are.

Diep Tran is an associate editor at American Theatre magazine. Her work has appeared in the New York Times, Time Out New York, and TDF Stages.