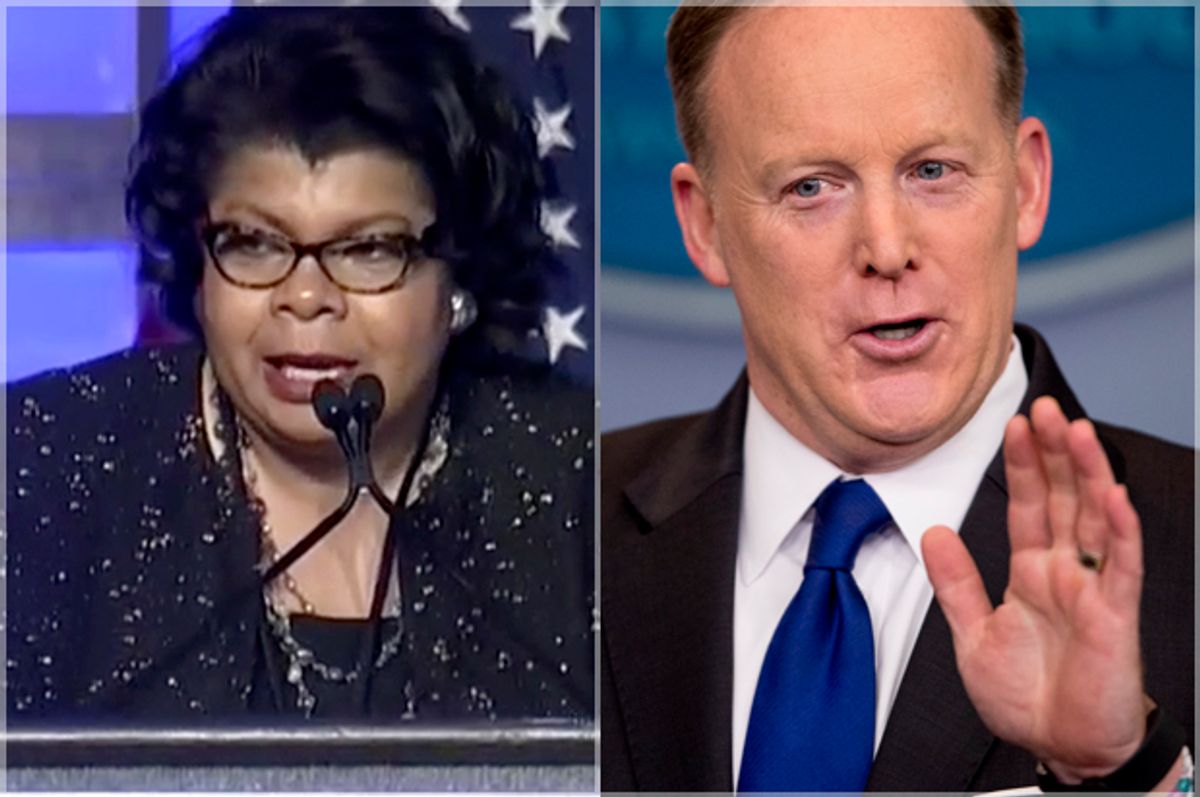 I try to catch all of Sean Spicer’s White House press briefings, and not just because I’m a journalist and concerned citizen. He's also funny — just as funny as Melissa McCarthy’s portrayal of him on "Saturday Night Live." Spicer’s humor doesn’t stem from jokes, however, and he’s not charming or magnetic in any way. He’s a hilariously angry cartoon: a vigilant, fact-dodging attack dog who always looks like he either just finished sobbing or silently screaming.

It’s hard to judge him for doing either, as his job is extremely difficult. Spicer has to talk to the media on behalf of a president entangled in weekly, if not daily, scandals. Unfortunately, Spicer isn’t my favorite comedian anymore. He crossed a line — yes, he’s crosses the line almost every time he touches a microphone, but this time he took it way too far.

Unlike Spicer, April Ryan, the White House correspondent and Washington bureau chief for American Urban Radio Networks, is a universally respected media figure. This journalist has covered three different presidents with honor and integrity — two words the current administration doesn't seem to understand. Yesterday, Spicer disrespected Ryan, who was doing her job by inquiring about Condoleezza Rice’s upcoming visit — asking him tough questions for which the public wants answers.

Here’s how their exchange went:

Spicer: But, April, hold on. It seems like you’re hell-bent on trying to make sure that whatever image that you want to tell about this White House stays because at the end of the day.  Let me answ—

Spicer: OK, but you know what? You’re asking me a question and I’m going to answer it. Which is, the president, I’m sorry, please stop shaking your head again.

But at some point, the reality is that this president continues to reach out to individuals who’ve supported him, who didn’t support him, Republicans, Democrats, to try to bring the country together and move forward on an agenda that’s gonna help every American. That’s it. Plain and simple. So, if you’re asking what we’re doing, I think we continue to do it. Which is to bring groups together that have been supportive of him, that haven’t been supportive of him but that to share a goal which is finding common ground on areas of national security, of personal security, of economic security, of job creation, of safer communities, of education, of health care, that can unite us as a country and make the country stronger.

I’m not sure what was in Spicer’s cornflakes yesterday, but he clearly owes Ryan an apology. Everyone in the Trump administration explodes when members of the press and citizens alike call it racist and sexist, and yet the Trump team continues to act in a racist and sexist manner. Spicer was clearly talking down to Ryan in their exchange. I can't believe that he feels he can tell a grown woman what to do with her neck.

Ryan, like many journalists, appears to be frustrated with the amount of mistruths and misdirection emanating from the Trump administration, so it stands to reason that some sort of nonverbal frustration might spill out. Spicer, in a typical Trumpian refuse-to-apologize manner, doubled down with his comment on "The Hugh Hewitt Show." “I suggest that somehow because of her gender or race that she’d be treated differently I think is, frankly, demeaning to her,” he said.

I don’t think Ryan wants special treatment; she just wants to be treated with the same dignity that Spicer would give to a white Republican man. It’s that simple. This whole administration needs a crash course on respect.