Taking it to the states: Anti-Trump resistance goes granular with Our States, a map-based organizing project 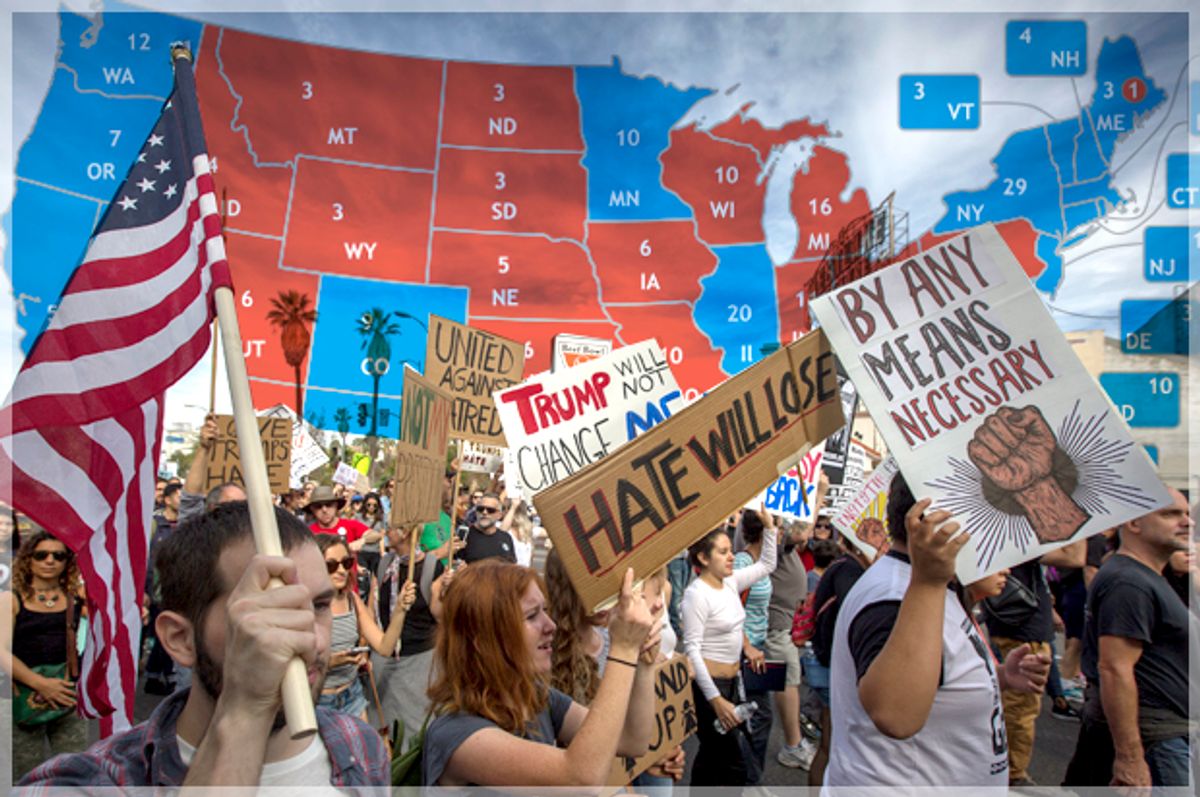 While national attention has been fixated on the constant state of emergency that is the Trump administration and the intense grassroots response that has dramatically crippled its earliest efforts, it’s a different story in state legislatures. But that’s about to change, thanks to a new project, Our States, launched by Stay Woke, an organization that emerged from the Black Lives Matter movement. Our States' map-based interface is designed to inform, empower and facilitate state-level action in a way that has only been seen on the federal level until now.

It was a natural development, according to Samuel Sinyangwe, a Stay Woke co-founder who spoke with Salon. “We launched Campaign Zero about a year and a half ago," he said. "It was focused on policing and police accountability, which was predominantly a state and local advocacy campaign. As the Trump election happened and a broad resistance movement emerged, it became clear that while so much energy was being directed at the federal level, whether it was on the [Affordable Care Act] repeal efforts or on the immigration deportations, many of these issues were actually being decided in state legislatures all over the country."

Added Sinyangwe: "There wasn't enough attention being paid to what was happening [at that level], such that in many cases states were enacting policies that were more severe in terms of their impact than what the Trump administration was able to do federally.”

But state legislators, even when they were voting on draconian new laws, “weren’t having their phone lines flooded in a way that Congress members were, or having their town halls interrupted and disrupted in the way that Congress members were around ACA repeal,” Sinyangwe said. “So what we wanted to do was create a platform that could help translate the energy in the resistance movement and direct it — in addition to the energy that is going federally — to the state level, so we can ensure that these harmful policies don't get enacted.”

One stark example of is this pattern is the attack on First Amendment rights. For all Trump’s campaign talk about beating up protesters, a federal law to impede or shut down demonstrations like the Women’s March on Washington would be inconceivable. But at the state level it’s been a very different story. A bill introduced in Tennessee this year would make drivers immune from civil liability if they hit protesters in the street. A Minnesota bill would charge protesters for the costs of protests, while a Mississippi bill would make obstruction of traffic a felony punishable by a $10,000 fine and a five-year prison sentence.

There are 19 states considering legislation to address police violence, for example, and 29 states considering legislation to increase the minimum wage, largely due to the Fight for $15 movement, one of the organizations that Stay Woke partnered with in putting the project together. By working collaboratively, Sinyangwe said, “We can put all of this in one place and make it accessible for people so they can more easily engage and be more informed, and not have to go find 11 different organizations, each with their own recommended bills and issue areas. We’re trying to simplify the ecosystem so that we can actually reach more people and be more effective in terms of helping to guide them towards state-level advocacy.”

Stay Woke has also been in talks with Indivisible, which will promote the Our States effort to its network of supporters, Sinyangwe said. With ACA repeal halted in Washington, at least for now, it’s both logical and important to follow up on related state issues, such as Medicaid expansion.

This kind of networked state-level organizing is long overdue. Conservative state-level organizing networks have around for decades. Best known of those is the American Legislative Exchange Council (or ALEC), which is primarily a business-backed, economic conservative organization that kept a low profile for decades before gaining wide exposure during the 2011 battles about public-sector labor rights in Wisconsin. Subsequently ALEC worked to pass the “stand your ground” laws favored by pro-gun organizations. Less well-known are two networks of state-level think tanks, which were described at length by researcher Frederick Clarkson in a 2013 article.

Progressives have lagged far behind, and the situation became far more perilous after the 2010 midterms, when the Republicans' REDMAP plan funneled $30 million into state races, flipping 19 state legislatures and giving them the power to gerrymander the House of Representatives so outrageously that Democrats will need a super-wave election in 2018 if they hope to win a majority. Former Salon editor David Daley told the whole story in "Ratf**ked: The True Story Behind the Secret Plan to Steal America’s Democracy" (and gave details in a Salon interview), but the Democratic Party has yet to respond — beyond announcing its intention to play catch-up in 2020.

Meanwhile, the political imbalance continues in state legislatures: Generally speaking, Republicans are grossly overrepresented, partly because they attract much less attention. But that same situation creates a real opportunity for organizing, since a small group of people can have a much greater impact than they do in targeting Congress.

“What we've noticed is that not only in speaking to our working state advocacy organizations, but also just looking at the literature, the state representatives are much more receptive than the Congress,” Sinyangwe explained. “They have much smaller districts, about 12 times smaller than members of Congress. They are not used to getting a lot of calls or being engaged very often at the scale that members of Congress are. What we are hoping for is a push around actually getting a number of state legislators to meet with their constituents."

The Our States website is designed to facilitate individual action, that leads to joining up with others. “This is advocacy 101," Sinyangwe declared. "Find out who your representatives are at the state level, learn about what bills they are currently considering, what their partisan affiliation is, what their past votes have been — and call them to arrange a meeting,” he said.

“What we're doing is helping to inform constituents for those meetings to make a 'strong ask,' whether it's an opposing one of the harmful bills that we've identified, supporting one of the protective bills that we've identified or suggesting new legislation. What we've done through our previous launch, 'The Resistance Manual,'" Sinyangwe said, " is provide people with information and data about each of those issues, so that they can make a more effective case when meeting with their legislators.”

Sinyangwe said he hopes that Our States' online sign-up tool will facilitate future organizing, “sort of like what Indivisible has done,” but he's not expecting overnight miracles. The goal is to realize a gradual buildup of activism that pays attention to all the steps in the process, sustains the energy and then connects people to one another in their respective legislative districts and states. “We believe it is more effective if you have many people engaging with many different state legislators on the same bill," Sinyangwe said, "so that energy can be more coordinated, and more effective.”

When dealing with Congress, activists often focus on simply getting a meeting. While gaining access to elected officials on the state level is generally easier, achieving legislative action is another story. “We want folks to be following up, getting a commitment from their legislators and then applying pressure as needed, recognizing that 32 state legislatures are GOP-controlled,” Sinyangwe explained.

“While it might be easier to get a meeting with your legislator, it is harder to move progressive bills through these legislatures," he said. "So this will require a type of organizing that we’ve seen be effective — for example, in blocking the ACA repeal in Congress — using the media effectively to apply pressure, using direct action and protest strategically to draw attention to particular issues and to get a legislator to respond to them.”

Our States envisions a combination of different forms of activism, orchestrated in concert. “We're going to continue to support folks as they are doing this," Sinyangwe said, "to understand the best practices and lessons learned from other groups, and from the work that we've done over the past two years — lobbying for local and state policies around policing in particular — and also to connect people because they can organize more effectively with one another.”

Our States is "not seeking to replace or overshadow any existing state efforts,” Sinyangwe said. “We want to help amplify them, by putting all that great content that they're producing in one place, so more and more people can have access to it, and doing what we do best around making it accessible, visualizing it and simplifying it so that more and more people can participate in the process.”

State and local officials are closer to the people, or so the theory goes, and the actions they take are therefore more transparent and commonsensical. But reality has been headed in the opposite direction for some time now, thanks to ALEC, REDMAP and the spread of Koch-style dark money. With the Our States toolbox to help people self-organize, perhaps theory and practice can begin to come back together. The 2018 midterms are not far away.