Angela Rye calls on CNN to stop giving a platform to "bigots" like Walsh. She's right. 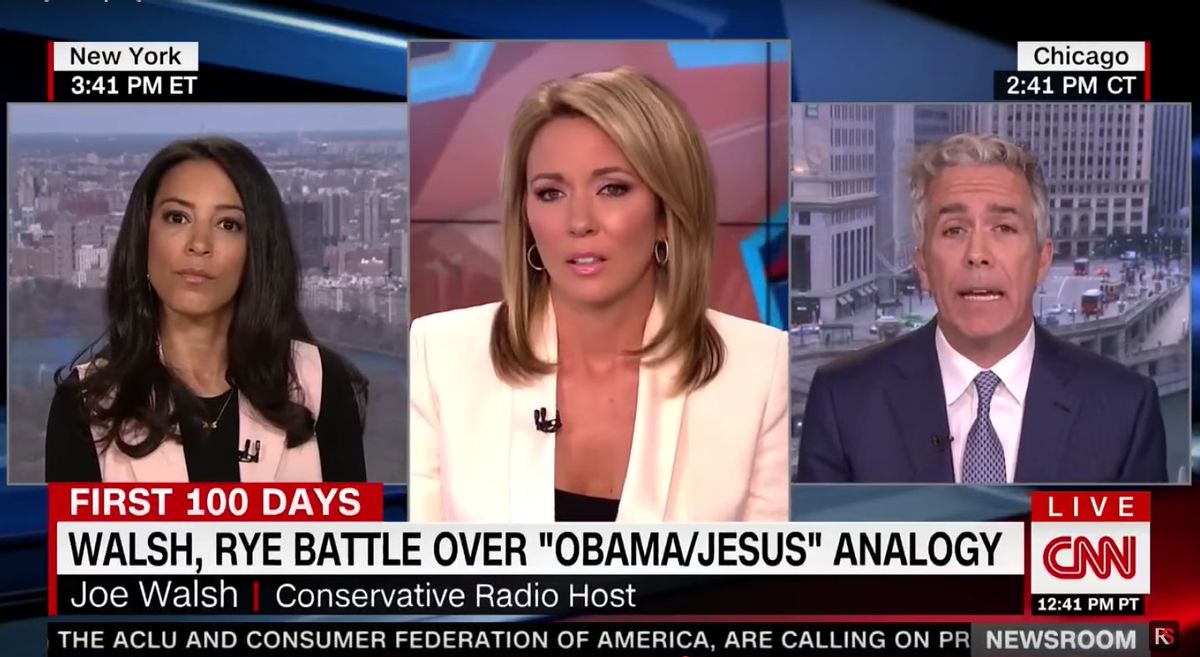 Liberal political commentator Angela Rye keeps on being misconstrued through no fault of her own.

In a Tuesday appearance on CNN, Rye argued that had former President Barack Obama been accused of being the recipient of help from Russia or some other country, that would be the only thing the news media would talk about.

“If this would have been under the Obama administration, there would be no end to this,” she said.

She continued, adding her view that the former president had to be perfect in everything he did or he would receive criticism for it.

“Barack Obama had to be the next best thing to Jesus; and here we are, just two months in and some change, there is issue after issue. Maybe it’s not Russian collusion; maybe it's collusion with the intel committee chair. But it’s highly problematic.”

Her response was then taken out of context by a number of conservatives who accused the Democratic political consultant of comparing Obama to Jesus Christ, something which she clearly did not do.

That inaccurate characterization set off Joe Walsh, a former congressman who is now a talk-radio host after serving a single term.

Trying to figure out a way to get into a debate with a regular CNN contributor, Walsh goaded her on Twitter: Eventually, Walsh seemed to realize his error but instead of apologizing to Rye, he deflected, claiming that Obama had been held to a “lower standard” for a president, allegedly because he is part black:

Seeing potential ratings fireworks, CNN producers decided to invite Walsh onto the show to debate Rye about their Twitter spat. Rye flatly refused once the camera was rolling, citing the tweets above.

“I’m not talking to bigots, Joe,” Rye said, after host Brooke Baldwin asked her to respond to one of his assertions.

I am not interested in trying to convince and change the mind of a bigot. Someone who will openly troll me and say things that are offensive, that he knows are not true.

Instead of leaving it at that, Baldwin prolonged the segment, asking Rye to expand on the sentiments that she had expressed on CNN Tuesday. The Democratic strategist did so:

I’m tired of people telling me that black people are beneath a standard when we have to be twice as good all the time. And that is why I said I am not interested in having a dialogue with someone like Joe who has demonstrated a propensity towards bigotry. And he did that on Twitter yesterday in 140 characters or less.

Walsh played the sympathy card in response, sarcastically saying to Baldwin, “I apologize that you invited a bigot onto your show.”

Walsh continued, claiming that Obama had not been “vetted” like other presidents had. It’s no surprise he would say such a thing given that he believes that the former president is a secret Muslim. He also believes in the ludicrous “birther” conspiracy theory that Obama was born outside of the United States. In August 2015, he even argued on Twitter that Obama had not ever “let a voter feel his birth certificate.”

The whole exchange made for good television, no question, but too much of the reaction to the segment has missed Rye's initial point about mainstream news outlets promoting bigotry. She was exactly right to say this:

“You all decided to give Joe Walsh a platform today. I’m not giving him the time of day. . . . I am not interested in trying to convince and change the mind of a bigot. Someone who will openly troll me and say things that are offensive, that he knows are not true.”

Too bad CNN isn't likely to take her advice.