What the Freedom Caucus means by "freedom": We've come a long way downhill since FDR 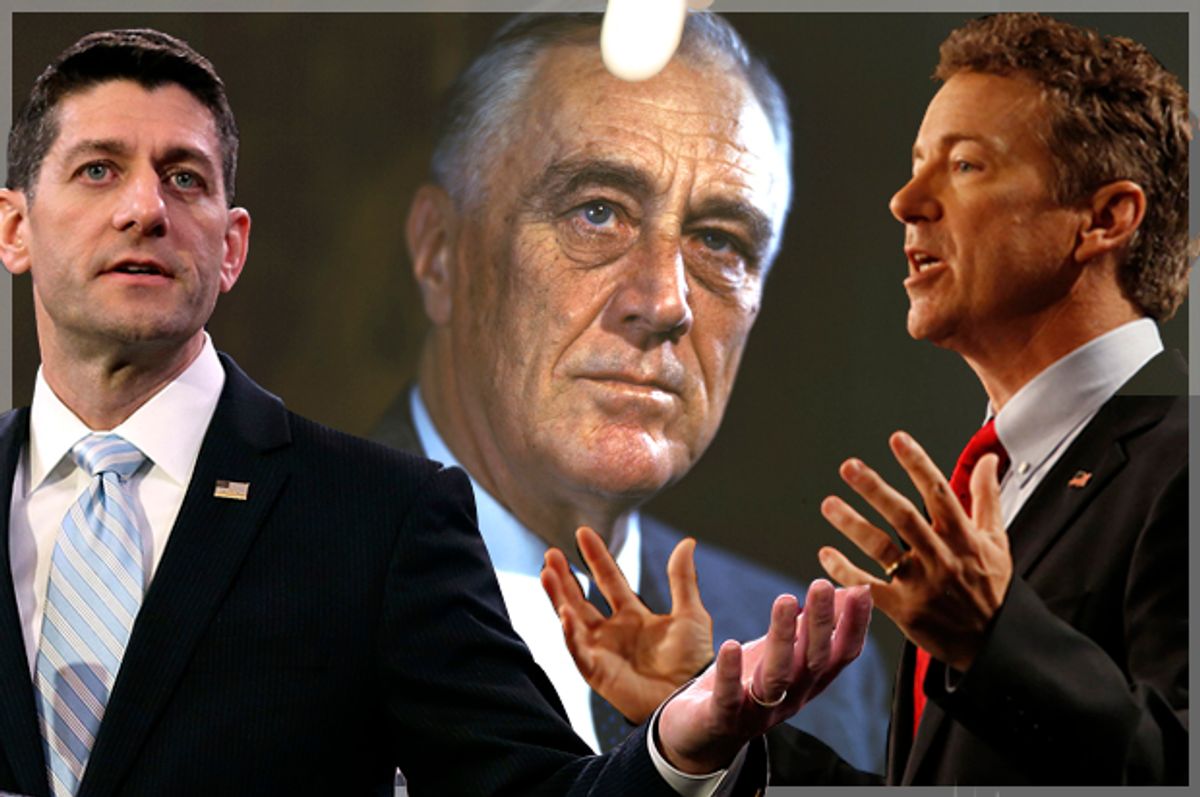 Since the American Health Care Act crashed and burned last week, the ultraconservative faction in Congress known as the House Freedom Caucus has deservedly received most of the blame from President Donald Trump and other top Republicans. On Thursday Trump even urged his supporters to "fight" the Freedom Caucus in the 2018 midterm elections, although whether the president will follow through on that threat is anyone's guess.

Even though Trumpcare would have eliminated the individual mandate and the Medicaid expansion, causing nearly 25 million to lose their health insurance over the coming decade, this group of about three dozen right-wing congressmen (and they are all men) refused to support the bill because it did not go nearly far enough, in their eyes, toward dismantling Obamacare.

In the end, there was a certain irony in the Freedom Caucus' sabotaging the Obamacare replacement plan, which had been promoted by their Republican colleagues as a restoration of personal freedom to the American people. “People are going to do what they want to do with their lives, because we believe in individual freedom in this country,” said House Speaker Paul Ryan while defending the bill shortly before the Congressional Budget Office projected that it would lead to many millions fewer Americans having health insurance. “You get it if you want it. That’s freedom.”

Of course, this wasn’t quite enough “freedom” for members of the Freedom Caucus, who wanted Trumpcare to also eliminate the Affordable Care Act’s “Title 1 provisions,” which prevent insurers from denying coverage for pre-existing conditions, allow children to stay on their parents' insurance until they are 26 years old, and bar companies from imposing annual and lifetime coverage limits. Only when insurance companies could once again stop covering cancer patients in the middle of their treatment, or flat out deny someone coverage because of a pre-existing condition, would the Freedom Caucus be satisfied that “freedom” had truly been restored.

So while Republicans agreed that repealing Obamacare — with the result that millions would end up being without health insurance — was about restoring their idea of freedom, they disagreed about just how far to go. Ultimately, it came down to pragmatism versus dogmatism. In the New Republic, Brian Beutler wrote a scathing critique of this “exceptionally callous” conception of freedom one week before plans to pass the AHCA fell through, commenting that Trumpcare would enshrine “indenture as a facet of personal liberty” and that “as a governing philosophy, it is the freedom to work until you die.” Of course, this callous conception of freedom is hardly new. Right-wing libertarian philosopher Friedrich A. Hayek, who inspired the Reagan and Thatcher revolutions of the late 1970s and early '80s, articulated it in his influential 1960 book “The Constitution of Liberty”:

Liberty does not mean all good things or the absence of all evils. It is true that to be free may mean freedom to starve, to make costly mistakes, or to run mortal risks. In the sense in which we use the term, the penniless vagabond who lives precariously by constant improvisation is indeed freer than the conscripted soldier with all his security and relative comfort.

Today when conservatives like Paul Ryan and Sen. Rand Paul, R-Ky., present themselves as leading exponents of freedom — particularly when it comes to “economic freedom” — they are employing the word in this narrow and negative sense, which reinforces the ideology of free market fundamentalism. This negative interpretation is a far cry from what the word meant to most people throughout the 20th century, when progressives offered a more modern definition, epitomized by President Franklin D. Roosevelt in his proclamation of a “second Bill of Rights” and his enumeration of the “Four Freedoms” crucial to a functioning democracy: freedom of speech, freedom of worship, freedom from want and freedom from fear.

Towards the end of World War II, in his 1944 State of the Union address, FDR declared that the original Bill of Rights had “proved inadequate to assure us equality in the pursuit of happiness” as the country had grown and the industrial economy expanded over the previous century:

We have come to a clear realization of the fact that true individual freedom cannot exist without economic security and independence. People who are hungry and out of a job are the stuff of which dictatorships are made. In our day these economic truths have become accepted as self-evident. We have accepted, so to speak, a second Bill of Rights under which a new basis of security and prosperity can be established for all — regardless of station, race, or creed.

This was a modern conception of freedom responding to the challenges of the 20th century — one that acknowledged America’s transformation over the previous 150 years from an agrarian nation of small, propertied farmers (that is, small capitalists) into an industrial and increasingly urban country of wage earners. For most of the Founding Fathers, political freedom and economic independence (and security) were considered closely interconnected. Thomas Jefferson’s agrarian ideal envisaged a nation of small independent farmers who owned their land and the fruits of their labor.

But that ideal quickly grew antiquated with the advent of the Industrial Revolution, as more and more “yeoman” farmers were torn from their land and forced into wage labor. By the middle of the 19th century many critics had begun equating wage labor with slavery (i.e., “wage slavery”), but Abraham Lincoln rejected this view. In his words, there was no “such thing as a free man being fixed for life in the condition of a hired laborer.” This may have been true in his day, but in the decades following his death the majority of Americans did indeed become “fixed for life” as hired employees, and wealth and property became increasingly concentrated at the top.

In other words, the kind of unfettered capitalism espoused by the Freedom Caucus and Paul Ryan today — ostensibly aimed at restoring individual freedom — led to the labor-market tyranny of a century ago, whereby workers were completely subservient to capital. The progressive and New Deal movements of the 20th century responded to these profound changes with reforms designed to restore economic security and independence to working people, in large part to stave off more radical movements that challenged capitalism itself.

Since Roosevelt gave his "second Bill of Rights" speech more than 70 years ago, the language of liberty has been co-opted by those on the far right who have propounded their own narrow and negative definition of freedom — one that largely ignores the past 200 years of economic and social development. Essentially, Republicans are advocating a Gilded Age variety of freedom, one that grants freedom to the rich but serfdom for everybody else. If the Freedom Caucus were to put forward its own economic bill of rights today, it might include a corporation’s “freedom” to pollute and destroy the environment,  pay subsistence wages and to deny someone health care coverage, while poor and working-class Americans would be granted the freedom to starve or the freedom to die from untreated illness when they cannot afford medical care.

While the Republican agenda hit a major snag last week with the collapse of the AHCA proposal — saving scores of Americans from losing their health insurance (or, as Republicans see it, from reclaiming their freedom) — there is no telling what legislative damage Republicans can do when they manage to unite. If and when they do succeed, they will no doubt employ the same high-minded talk of freedom to defend their reactionary agenda. It is up to progressives to put forward their own 21st-century conception of freedom to counter the mythical and destructive variety espoused by right-wing ideologues.