Climate-change denialists were already terrible, but they've grown bolder and more bizarre in the age of Trump 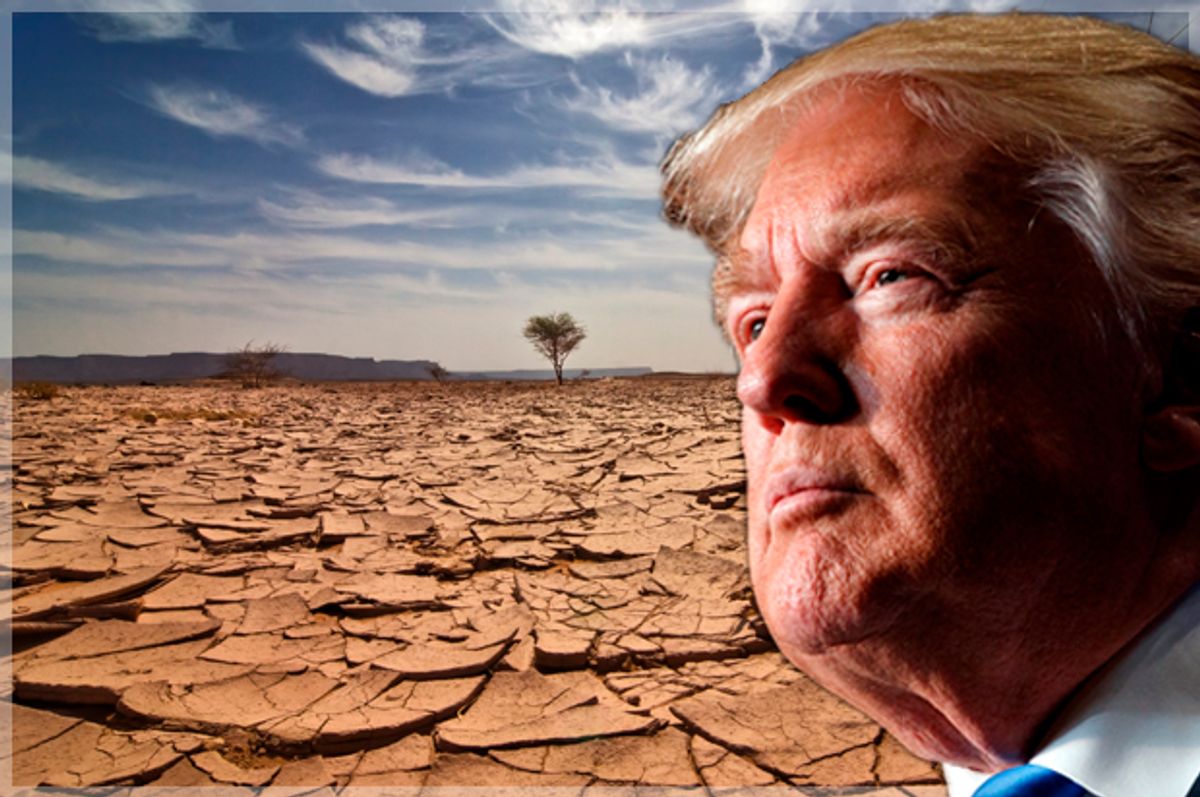 Perhaps the best way to understand the presidency of Donald Trump is to recognize that he's building on and advancing the already advanced authoritarian tendencies of the Republican Party. Nowhere is this more obvious than when it comes to climate change denial.  Even before Trump was elected, a whopping 84 percent of the conservative Republicans polled by Pew Research refused to accept that climate change is real and caused by human activity, and even 65 percent of the moderate Republicans surveyed rejected the facts.

Make no mistake: Climate-change denial is a straight-up conspiracy theory. To reject the scientific consensus necessarily means believing that climate scientists around the world are lying to the public for some nefarious purpose. And with an avid conspiracy theorist like Trump in the White House, Republican politicians are just becoming bolder in their widespread policy of denial.

On Wednesday Rep. Lamar Smith, the climate-change denialist who chairs the House Committee on Science, Space and Technology, ridiculed one of the foremost peer-reviewed scientific journals in the world, Science.

“That is not known as an objective writer or magazine,” Smith said, dismissing testimony given by climate scientist Michael Mann, who referenced a recent article by Jeffrey Mervis in the publication.

The best part? Smith wasn't even disputing claims about climate science. He was trying to discredit reporting that quoted him directly. Here's the exchange in full:

Michael Mann: [Smith] indicated at this conference that he, according to Science, and I am quoting from them, he sees his role in this committee as a tool to advance his political agenda rather than a forum to examine important issues facing the U.S. research community, as a scientists I find this deeply disturbing.

Rep. Lamar Smith: Who said that?

Mann: This is according to Science magazine, one of the most respected outlets when it comes to science . . .

Smith: Who are they quoting?

Mann: This is the author, Jeffrey Mervis.

Smith: That is not known as an objective writer or magazine.

Here is an excerpt from Mervis' piece, on which Smith was trying to cast doubt:

“Next week we’re going to have a hearing on our favorite subject of climate change and also on the scientific method, which has been repeatedly ignored by the so-called self-professed climate scientists,” Smith told the Heartland Institute’s 12th annual conference on climate change in Washington, D.C. . . .

Then boos filled the ballroom of the Grand Hyatt hotel in downtown Washington, D.C., after Smith mentioned the fourth witness — Michael Mann, a climate researcher at Pennsylvania State University in State College and a frequent target of climate change doubters. “That’s why this hearing is going to be so much fun,” Smith said with a huge grin on his normally impassive face.

I've quoted that at length to make clear that Smith was not objecting to a scientific theory or finding but rather a description of his own behavior that was witnessed by more than one reporter and caught on tape.

But with Trump in the White House, it's no surprise that other Republicans feel emboldened in their dishonesty, denying not just scientific data or research but even their own words. Denying something he's been caught saying on tape is a common habit of Trump, after all.

All this suggests why conspiracy theories like climate-change denial are closely tied to authoritarianism. Yes, people of all political stripes can become caught up in conspiracy theories and hoaxes. But authoritarians are particularly prone to denying even obvious facts, because of the nature of their ideology. To the authoritarian, "truth" does not flow from empirical or verifiable reality but instead is determined by those whom the authoritarians deems to be the proper leaders. (Usually a self-appointed designation.) Reality is what Smith or Trump or whatever Republican demagogue says it is, not your videotapes or scientific evidence.

This, in turn, helps explain the fact that befuddles many journalists: Trump supporters will eagerly endorse Trump's lies, even when they clearly know he is lying. Take, for instance, this amazing clip in which CNN's Alisyn Camerota keeps going around and around with Trump voters about their belief that millions of people voted illegally. What quickly becomes clear is that they know that "millions" is not a reality-based statistic, but they insist on believing this anyway. "True" is whatever Dear Leader says is true and has no relationship to actual evidence.

All of which is to say we've only just entered this fun house of mirrors where Republicans boldly make stuff up and don't really care if it meets your reality-based version of truth. Things are probably just going to become weirder from here.

Take, for instance, this amazing story from Pennsylvania, where state Sen. Scott Wagner — who likes to say "Donald Trump is a visionary and he's a leader" and who is hoping to be the Republican nominee for governor — got downright trippy with the climate-change denial, according to NPR's StateImpact:

“I haven’t been in a science class in a long time, but the earth moves closer to the sun every year – you know, the rotation of the earth,” Wagner said in an event organized for county commissioners opposed to natural gas drilling regulations. “We’re moving closer to the sun.”

That bears no relationship to reality. In fact, the Earth's orbit (which is what Wagner probably meant by "rotation") is literally what keeps it from plummeting toward the Sun. But that's just centuries-old knowledge, demonstrated through mathematics and observation, so not relevant in our age of Trumpism.

“We have more people," Wagner added, continuing his imaginative foray into science. "You know, humans have warm bodies. So is heat coming off? Things are changing, but I think we are, as a society, doing the best we can.”

The only truly surprising thing is that Wagner didn't get even more creative, while he was just making stuff up. Blame climate change on women having too much sex! Or Barack Obama's affection for Islam! In Trump's America, there's really no need to worry about sounding plausible when you spin outrageous lies.