It turns out that Bernie Bros and Trump supporters have something in common: Russian trolls 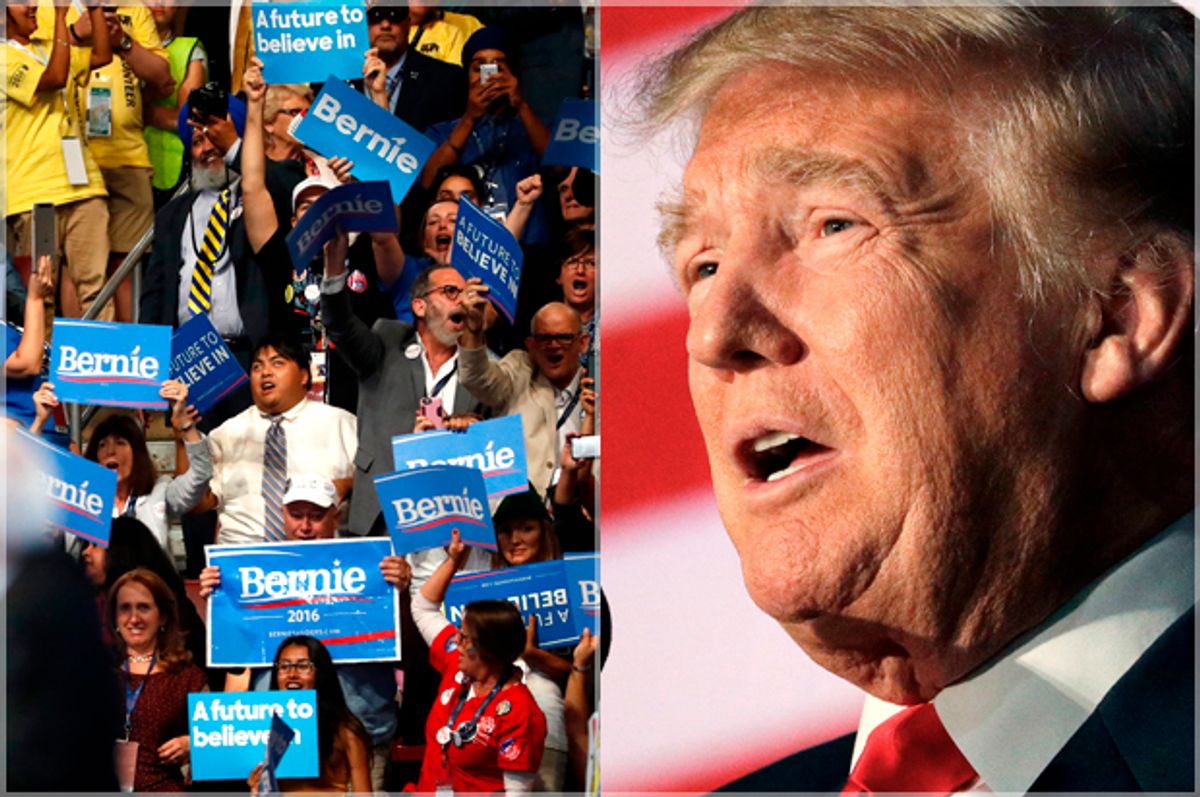 As a certified Twitter addict who is also fond of conspiracy theories, President Donald Trump has become an easy target for foreign intelligence agencies looking to peddle falsehoods to him, a former FBI agent told the Senate intelligence committee on Thursday.

Clint Watts, a senior fellow at Center for Cyber and Homeland Security at George Washington University, told committee members that during the 2016 presidential campaign season, Trump routinely recycled conspiracy theories which were promoted by spurious news websites which are openly operated by the Russian government.

According to Watts, both Trump and the websites feed off of each other to promote false beliefs through a system of propaganda which was called “active measures” by the former Soviet Union. Russian President Vladimir Putin worked as a spy for the communist dictatorship’s KGB intelligence service.

Trump has “made claims of voter fraud, that President Obama’s not a citizen and, you know, Congressman [Ted] Cruz is not a citizen,” Watts told committee members. “Part of the reason active measures works, and it does today in terms of Trump Tower being wiretapped, is because they parrot the same lines.”

Such theories have been around long before social media but the popularity of social media has made their propagation much easier. Conservative Americans, who have long hated and distrusted the mainstream press, are particularly vulnerable to misinformation.

According to Watts, many fake Twitter accounts which he said were linked to Russia deliberately target Trump to spread falsehoods.

They “tweet at President Trump during high volumes when they know he’s online, and they push conspiracy theories,” he said. In a Friday appearance on MSNBC, Watts said that for-profit fake news websites also target Trump on Twitter as well.

Russia has been utilizing active measures propaganda since 2009 and has continuously increased its capabilities since then, Watts testified.

Liberal Americans may also have been targeted for fake news during the last election. Earlier this month, the Huffington Post released a report based on interviews with many former supporters of Vermont Sen. Bernie Sanders who told the website that Facebook groups they were operating last year were targeted by fake accounts promoting websites that were registered in other countries such as Macedonia.

While some fake news websites, such as Sputnik News, are indeed owned and operated by the Russian government, many of them are purely for-profit endeavors targeted toward tricking the gullible.

According to Aleta Pearce, an administrator of several pro-Sanders Facebook groups, many of the fake accounts she encountered were essentially spammers using “sock puppet” accounts to promote their websites to get clicks and advertising impressions:

“The pattern I’m seeing is if a member is repeatedly posting articles that are only from one URL that person is just there to push advertising,” she wrote in May of last year. “They probably have a sock account with little to no content. They are often from Russia or Macedonia.”

In interviews with BuzzFeed, several for-profit fake news website creators said that they tried creating pro-Sanders publications but that their pro-Trump ones were more popular.

Some supporters of Hillary Clinton also used spamming an infiltration techniques to attempt to sway Sanders fans after the Democratic primaries had ended.

One of the pro-Sanders Facebook administrators contacted by the Huffington Post asked to have her name removed from the article because she believed it focused too much on Russia and not enough on other motivations for fake news purveyors.

Aleta Pierce, an administrator of several Bernie Sanders Facebook groups, was originally quoted by the Huffington Post but subsequently asked that her statements and name be removed from the article because she believed it painted an incomplete picture about the motivations of fake news purveyors, focusing only on potential Russian propagandists. She also said that the Huffington Post declined to mention her account of how several pro-Clinton trolls took over Sanders groups and made them into shill organizations for Clinton.

It’s unknown just how much of an impact made-up news has on shaping public opinion. According to a January study by two economics professors at Stanford University and New York University, only 34 percent of Americans trust news they receive on social media.

The study found that pro-Trump fake news received around 30 million likes and shares compared to pro-Clinton stories which received 7.6 million. The economists found that most legitimate news websites do not get their traffic from social media networks. That correlates somewhat with data collected by Facebook itself. CEO Mark Zuckerberg has said that fraudulent stories comprise “a very small volume” of the posts shared on his service.

Correction: This article originally misstated the name of the Bernie Sanders Facebook administrator as Lauren Steiner. It is Aleta Pierce.