Patience on Flynnghazi: Be extremely wary of whatever Michael Flynn offers to say in public

Treat Michael Flynn's testimony-for-immunity offer skeptically, given how he's lied about everything else 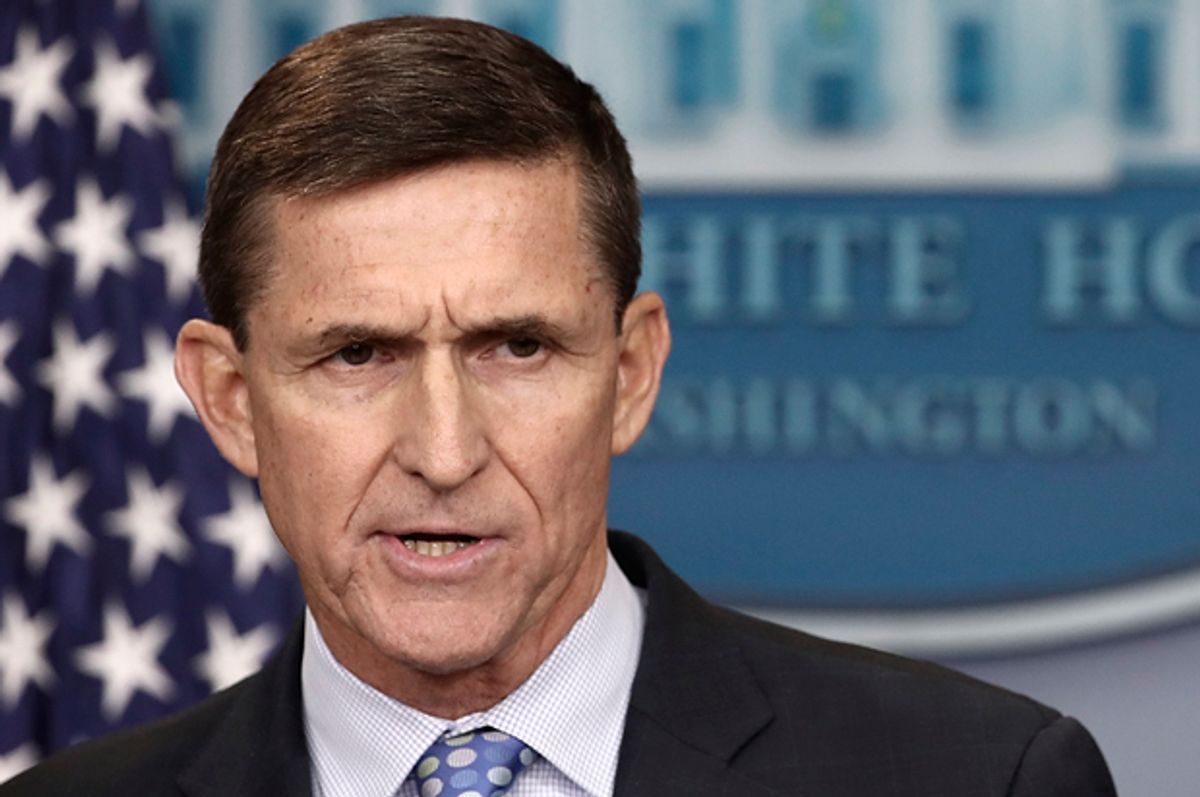 The Wall Street Journal broke some eye-catching news last night with a story on former National Security Adviser Michael Flynn shopping around an offer to testify on connections between the Trump campaign and Russia in exchange for immunity. This news was confirmed by Flynn’s attorneys, who released a statement saying that “General Flynn certainly has a story to tell, and he very much wants to tell it, should the circumstances permit.” With that, the DC scandal alarm started blasting at full volume.

On Twitter and cable news, the Flynn report was treated as the beginning of the end for President Trump. For Flynn to seek immunity means that he’s ready to give up Trump, the thinking goes. He is the first boulder in the avalanche that will eventually lead to . . . something. Indictments, resignations, impeachments — the possibilities are endless!

Let’s all take a quick moment to breathe and allow some of our charged political atoms to return to their ground state.

There is definitely a scandal unfolding here — the mere fact that a former National Security Adviser is talking about immunity from prosecution is a stop-you-in-your-tracks development. And an offer for testimony in exchange for immunity certainly sounds sexy and potentially incriminating, not least because people like Michael Flynn have treated their political rivals’ pursuit of immunity as tantamount to an admission of criminal wrongdoing. But there are other factors to consider as well.

Agreeing to testify before Congress doesn’t necessarily mean that Flynn is ready to turn on anybody, let alone Trump. As Harvard Law professor Alex Whiting writes, the fact that Flynn’s attorneys are openly talking about an immunity request could very well be a sign that Flynn doesn’t have much to say and is just looking to cover his own ass while the criminal investigation into the Trump campaign’s Russia contacts is still ongoing.

Sworn public statements from Flynn given with immunity would complicate any pending criminal case against Flynn, given that those statements would be widely disseminated but also inadmissible as evidence against him. As the Washington Post notes, this was exactly how Oliver North got off the hook for the crimes he committed in service of the Iran-Contra scandal and cover-up. So it’s very possible that Flynn is just fishing for a way to protect himself from potential legal action while simultaneously protecting Trump. (The Senate Intelligence Committee, meanwhile, has rejected Flynn’s offer for testimony in exchange for immunity.)

Also keep in mind that Flynn is a liar. He was bounced from his senior role in the Trump administration because he lied. So when Flynn’s attorneys say that their client “certainly has a story to tell, and he very much wants to tell it” it’s best to assume that the story Flynn wants to tell probably isn’t the truest version of that story.

That, actually, is the most important thing to maintain focus on: the relentless, all-consuming mendacity of the Trump administration. Lies cost Flynn his senior White House position just three weeks into the administration, but we still don’t know why Flynn told these lies. Trump and everyone at the White House swears up and down that there was nothing inappropriate about Flynn’s contacts with the Russian ambassador, but no one so far has offered an explanation as to why Flynn hid the content of those conversations.

To deflect attention away from the Russia lies, the administration has cooked up some fresh duplicity with (it seems) the assistance of the chairman of the House Intelligence Committee. You likely remember when Rep. Devin Nunes, R-Calif., made the dramatic announcement that he’d uncovered some evidence that Trump officials’ communications had been caught up in electronic surveillance during the Obama administration, and that he had to “brief” the White House on this development.

After several fraught days of Nunes flatly refusing to reveal his sources to anyone (including his own committee members), the New York Times reported that Nunes’ sources were, in fact, White House officials. This bizarre sequence of events effectively derailed the House Intelligence Committee’s investigation into the Trump campaign’s Russia ties.

There are far too many lies out there right now for the people making them to keep straight, and the liar themselves are not the most cunning prevaricators Washington, DC has ever seen. One hopes that all this duplicity will eventually lead to a reckoning for its hapless authors. But unwinding all these falsehoods takes time. Patience is valuable commodity here, as is an enduring skepticism of literally everything said in public by anyone associated with President Trump.