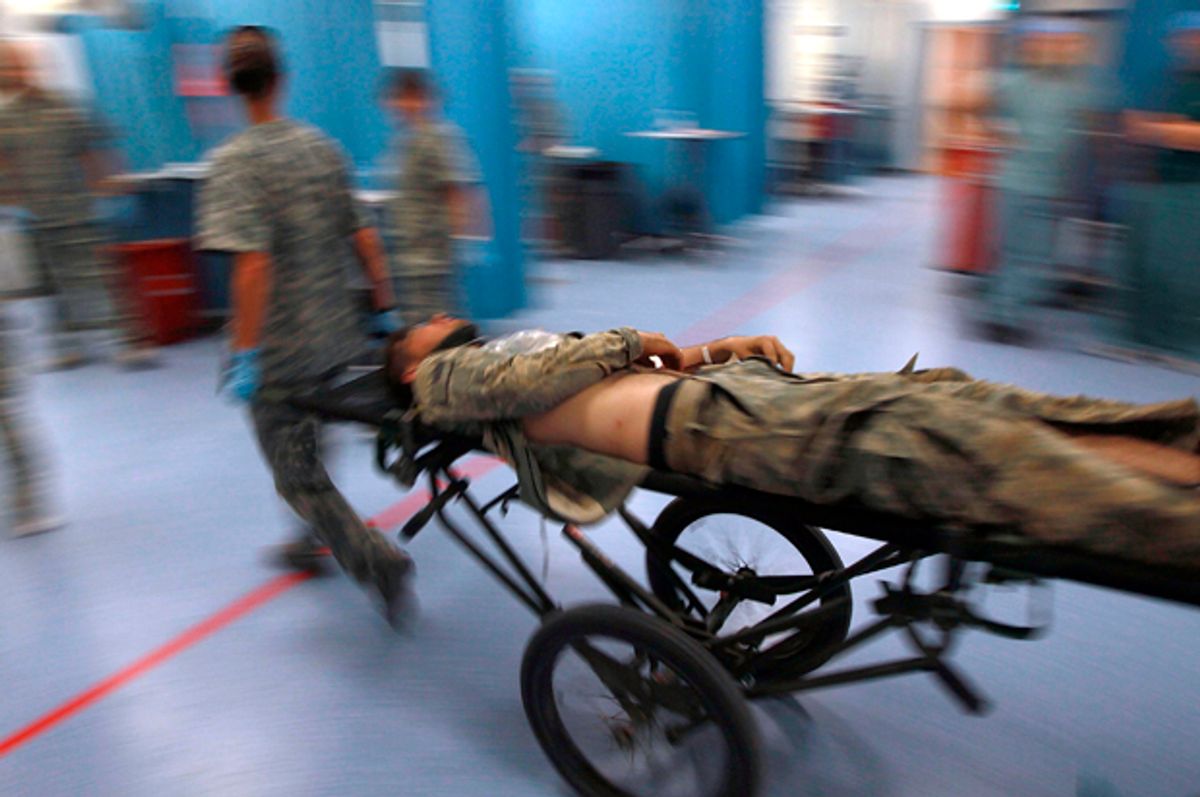 What do wounded veterans and astronauts have in common? Both could benefit from scientists that are researching a better way to regenerate bone tissue damaged by combat and long periods of time in the weightlessness of space.

Melissa Kacena, associate professor of orthopedic surgery at Indiana University’s School of Medicine, is leading a team studying whether a new treatment for stimulating bone growth is better than current options.

“There’s a need to develop new bone-healing therapies that are safe and effective. That’s what my lab has been doing over the last several years,” Kacena told Salon regarding a new patent-pending healing agent that’s being tested on laboratory rodents and pigs.

If the treatment proves to be viable and safe it could someday be used to treat humans, including victims of car crashes, and be part of future astronauts’ medical kits for long-term space travel, where bone injuries are very likely to occur.

Research into the effects of the microgravity conditions at the International Space Station has concluded that humans lose a considerable amount of bone-mineral density in weightlessness. This phenomenon causes bones to become more brittle, increasing the chances of fractures in an environment where traditional hospitalization and physical therapy isn’t an option.

Last week, bone samples from rodents that were administered the healing agent in orbit were shot back to earth from the International Space Station. The samples will give Kacena and a team from the U.S. Army Medical Research and Material Command a better understanding of the effectiveness of the new bone healing agent. The research will also shed light on the biology behind re-growing tissue that could help create new treatment options for patients suffering from chronic non-healing wounds.

Salon spoke with Kacena recently about why some of her research on this project was done using lab rodents at the International Space Station.

Obviously, the question everybody wants answered is will we be able to regrow lost limbs someday?

[Laughs.] I certainly hope that we can do that. Certainly there are lizards who can re-grow limbs, but it’s hard for humans. It’s more about regenerating really injured limbs. I wouldn’t say that we’re going to be starting from the hip and growing down to the toe. That’s a hard accomplishment. I’m sure someday they’ll be able to do that, just like they can grow organs.

Walk us through the research that you’re doing.

So, my work is supported by the U.S. Army and the Department of Defense. The reason why they’re interested in this is that our military personnel from the Middle Eastern conflicts in the last couple of decades have sustained injuries to their extremities, to their legs and their arms. The armor is much better than it used to be and our responders are much better at dealing with our injured warriors, so a lot of them survive. If orthopedic surgeons are able to salvage the limb and not amputate it the patient needs a large-skeletal reconstruction.

To do this in most cases, surgeons need to use something called bone morphogenetic proteins, or BMPs, to help regenerate the bone tissue, because it won’t regenerate on its own. There aren’t enough viable, live cells for that to occur, so you need something to stimulate them. BMPs have their pros and their cons, but in the last few years there has been some research that indicates that there is a potential of developing cancer with the utilization of the BMPs. It’s a small chance, but still, people don’t like to hear, “I can help your bone but I might give you cancer.”

How does doing some of the research at the International Space Station fit into this?

We’re looking at how bone-healing occurs with the BMPs and [with] our bone-healing agent, and we’re looking at that on earth and in space. The reason why we care about looking at this in space is that a lot of drugs work great in animals but they don’t work as well as we had hoped in humans. That may be because of the differences in physiology between the humans and the animals, but sometimes it may be because of the model that’s being used to test the therapies. That’s what I think is happening here.

Take for example a soldier that has sustained a blast injury, or someone involved in a really bad car accident: If a large chunk of your femur, which is the thigh bone, or your tibia, which is your shin bone, is removed, you’re not going to be walking; you’re going to be on crutches or bed-ridden for a long time. With our wounded warriors, if you’re talking about trying to salvage a limb from amputation, in some cases they could be looking at about six months of limited-to-no weight bearing, so no walking around on the limb.

I can take out almost half of a femur of a mouse and it will walk almost immediately after emerging from anesthetic. If you do any of these surgeries on mice, rats and pigs — we’ve also been working with pigs because we are trying to translate this into the clinic, and for FDA approval you need to show the results in rodent as well as large mammal models — these animals, as soon as they wake up from anesthetic, immediately start trying to walk around and they do walk around. We can’t tell the mice not to do this, but if we put them in space they can’t do this.

So you think the weightlessness of space better helps to see the effect of your bone-healing agent.

I think space flight is a better [testing] model. The reason why I say this is that we know that bone-healing and bone-regeneration are better when you bear weight. A therapy may look like it’s working well in an animal because it’s bearing weight which is contributing to the healing process. The human that’s bed-ridden or on crutches won’t be bearing weight and maybe the healing doesn’t occur as well as it does in the animals — that the healing is from the effect of the weight bearing and maybe not so much the drug. That’s one very critical thing about why we’re doing this in space.

This research seems to have two components: one for treating injury on earth and the other for treating the human body in space.

So, we need to understand better for the future astronauts, and potentially for the colonization of the Moon and Mars and so forth, how bone healing and regeneration occurs in space. That’s another important aspect. We know that humans lose about one to three percent of their bone-mineral density for each month that they’re in space. Somebody with severe osteoporosis loses about one percent in a year. For a mission to Mars that’s 36 months of possibly losing one to three percent per month. Right now astronauts tend to be in space for six months at a time. We don’t know whether the loss would continue over the whole 36 months or whether it would plateau at some point, but certainly at this point it looks like it [the bone-mineral loss] continues at the same rate, at least through the six months that astronauts tend to be in space.

And there’s little they can do for this?

They use drugs that help with osteoporosis here on earth and they use exercise, and the combination of the two is somewhat helpful, at least based on the data I’ve seen on this, but it definitely not 100 percent preventative. Given that issue, there would be concern. Mars and the Moon both have partial gravity, so if you are in space flight for some long time where you’re essentially in zero gravity, and then you go to a partial gravity environment and you’ve lost a whole bunch of bone, you’re increasing your risk of fracturing while you’re in space.

From what I have understood through conversations with different folks at NASA, there is concern because astronauts use their arms and hands in space to pull themselves to different places. It may be that instead of a hip fracture or spinal fracture, which are common with osteoporosis, it may be more arm- or hand-related fractures. We need to understand how you can help with fracture healing because you don’t have access to hospitals like here on earth. They need to think about what kind of drugs to have in their medical kit to try to help with all of these different scenarios if you’re going to be isolated in space for a long period of time.