Ivanka Trump's #WomenWhoWork guide to getting the job you want

Unpaid labor and a vague title never looked so glam! Here are 5 tips for blazing a White House trail of your own 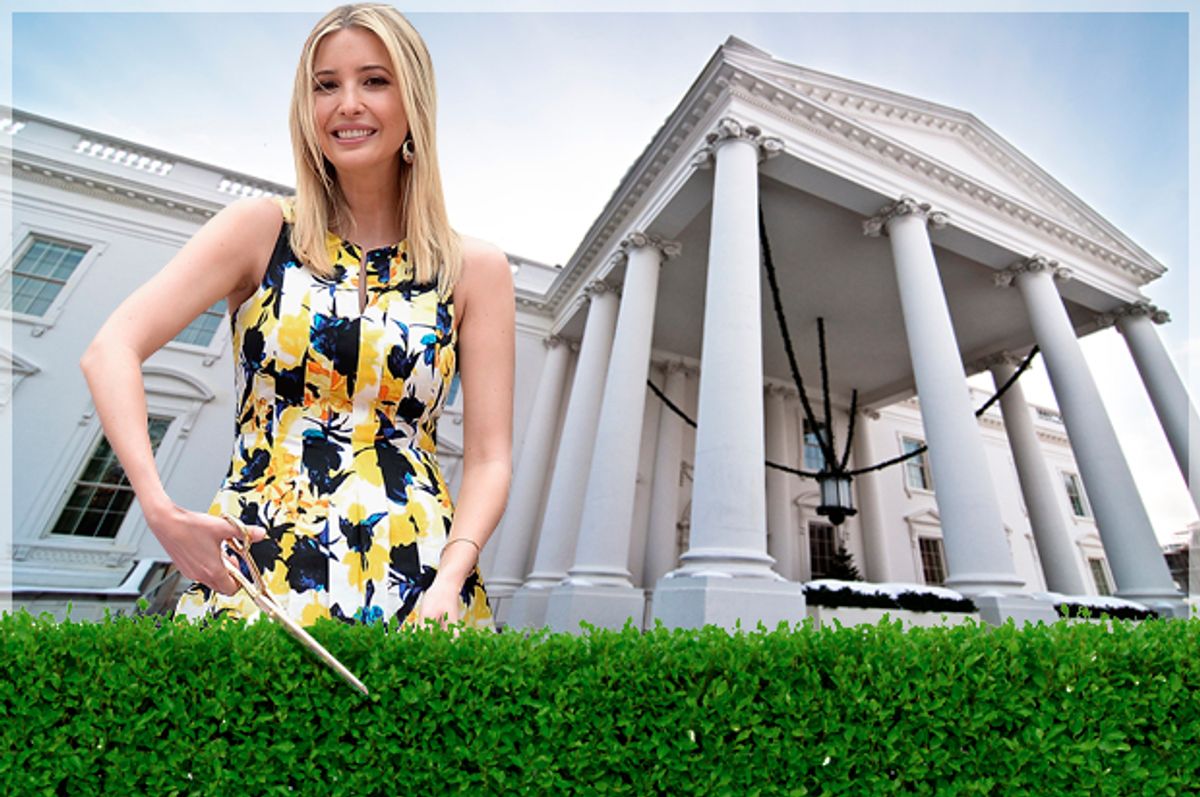 If you’ve ever found yourself wondering why you, just a regular woman who works, haven’t managed to embrace your amazing multidimensional life and fully prioritize all of your passions — from grooming your appropriately glamorous young children to putting your eponymous apparel and accessories company on the back burner to take an unpaid job in your dad’s office — and package them into one Instagram-friendly personal narrative, your name probably isn’t Ivanka Trump.

Even though she is totally divested from her own company now that her father is president of the United States, and therefore doesn’t follow the ups and downs of her fashion line at all — promise! — Ivanka remains as committed to being a #woman who #works as ever.

First, she was a dedicated brand ambassador for her father, up-selling his customers on a high-end suburbia-friendly version of Donald Trump, one who raised an accomplished daughter whose name he can even remember 90 percent of the time. And it worked — thanks to years of conditioning by the E! Network to look upon the head of a wealthy reality TV family with warmth rather than a more appropriate mixture of fear and loathing, a significant demographic was ready to buy in.

Sure, Ivanka could have returned victorious to her office suite in Trump Tower and gone back to promoting the lifestyle of the stylish modern working woman and mother, but like the fundamentally different professional woman that she is, she set her sights on more shabby-chic digs a few hours south.

After allowing herself an appropriate amount of time to settle her children into their new Washington home while husband Jared Kushner settled into his unpaid role as the President’s Chief Officer of Assumed Competency, Ivanka knew she’d better wedge her peep-toe in before the door of opportunity swings shut for good.

Now, she has a job that’s so exclusive she can’t even tell anyone without security clearance what she’s doing.

If Ivanka can have it all, so can you! Here are five key lessons you should learn from Ivanka Trump’s road to the White House.

1. Never take the first deal on the table

If the first offer your boss made was any good, wouldn’t someone have taken it already? Ivanka learned this when the idea floated around (who knows how these rumors get started?) that she might take on the first lady role for which her stepmother Melania is obviously not suited.

Ivanka, of course, has the full skillset of a successful modern first lady: an elite education, an accomplished career and visible affection for the president. But then Ivanka asked herself: Did she really want to sneak off with a leftover job like an office lunch thief? The lesson here for you, even if you lack an elite education and visible affection for the president, is that doing the work your colleagues quite obviously think is beneath them is not very amazing at all.

2. Don’t be afraid to walk away —if you don’t prioritize your #passions, who will?

So you’ve made the case for the job you want, but your boss isn’t budging. Why should he? You’ve made yourself too available, and that makes you seem desperate. If you know he has a huge career-defining deal to close, and you know he can’t do it without your advice, skip town, go skiing in Aspen and let him fall on his face in front of the whole world. To up the stakes, take his closest adviser with you. He’ll think twice next time he ignores your advice on health care reform and tells you to host another dinner party about day care, won’t he?

That Aspen trick? Only works if you’ve made it known that you don’t need the job — the job needs you. Your backup plan can be anything, but we at #WomenWhoWork suggest that it involve the final chapter of your forthcoming book, which could expose your boss as a fraud and a failure and a terrible father, since you have all this extra time to write it now.

The Ivanka Plan worked! The job — whatever it is — is yours. So now’s not the time to start solving problems for everyone else. The boss might be tempted to deal you a little payback for the Aspen gambit by piling on the responsibilities in a hackneyed “Twilight Zone”-level display of workplace irony, and if you let him, every detail of the operations will have to pass your desk first. Never make yourself so vital to the office that you can’t leave for a week or a month or even, hypothetically speaking, 18 months with time served. (Always be prepared for the next chapter of your company’s story!) Who has time for that? Not a #WomanWhoWorks, that’s for sure.

5. Nobody needs to know your #ExtendedJobTitle but you

You have a high-profile office, security clearance, a vague title, unchecked influence and access to the highest office in the land, and yet no formal job description. Congratulations — you’re a totally modern inspiration for working women. Who knows what you'll be able to achieve now? You'll make us wait for the unauthorized biography to find out.

Now we want to hear your #IvankaGoals! How are you inspiring yourself and others to help Ivanka Trump reach new heights in her life?