Letting sleeping dogs lie: What "Nurse Jackie" taught me about the addict at home

I didn't watch "Nurse Jackie" because of my husband's addiction. I didn't even connect them at first 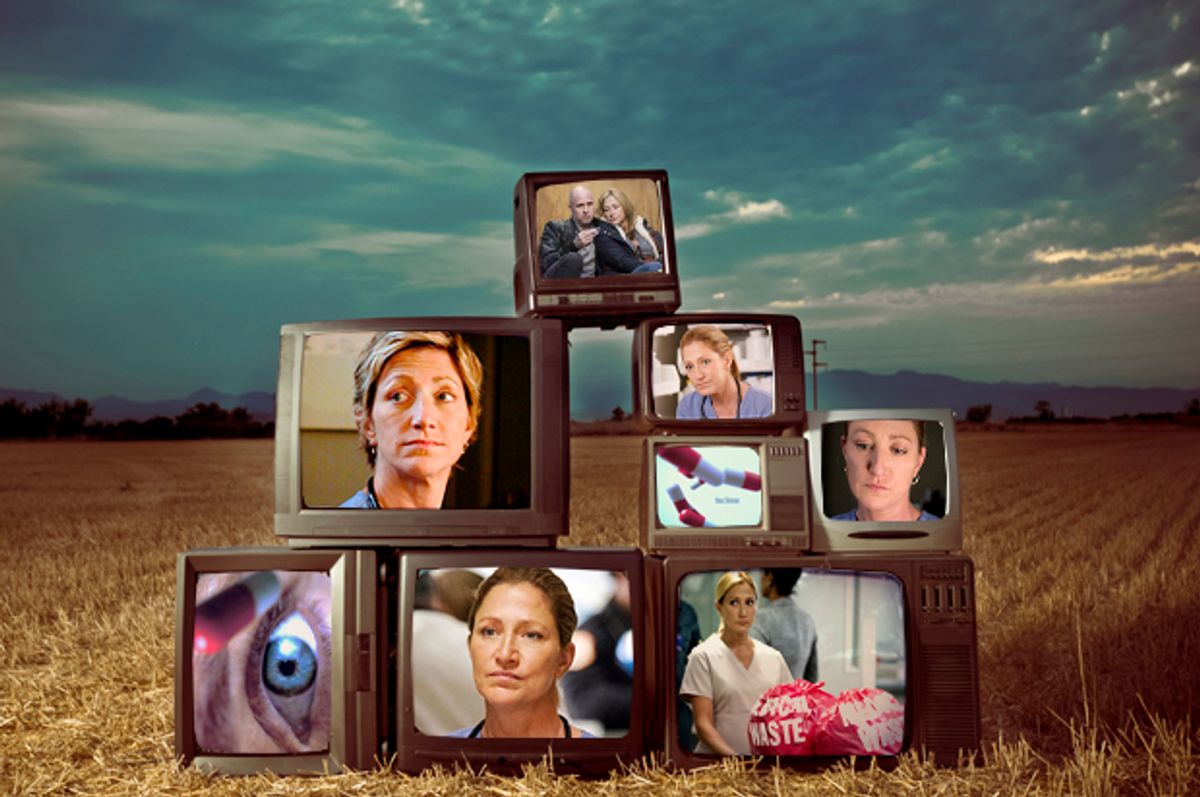 He was dead to the world when I got home from work, asleep on top of the quilt, with the woven wool throw pulled tight around his shoulders. What I could see of his face was clammy. Sometimes I kissed my hand and pressed it to his hand, or his shoulder, but this time I leaned over and kissed his forehead. His skin was warm. I lifted the edge of the throw to find the remote he was clutching in his hand. I couldn’t pry his fingers loose, so I nudged it enough that I could turn the television volume down. It was a small place, and the History Channel could easily take over all thoughts and sounds in our house.

After feeding our two cats, Chicken and Rabbit, I made myself a bowl of cereal, sat down on the corner of the worn and stained sofa, and opened my laptop. I logged into my friend’s Netflix account.

We had a television that could theoretically connect to the internet. When my great aunt passed away, I was the only one in the family without a flat screen, so I got it. Strange blessing. It was nicer than any other item in our home. It stood out against the splinter-lined trunk I called a coffee table, the overburdened bookshelves and the piles of dusty books in haphazard stacks against the walls, the cat-scratched furniture, and the stained ceilings and walls from roof leaks that had never been fixed. It would have been nice to watch Netflix on the large flat screen television, but our internet was too shady (stolen from the neighbor) to reach the television, and the steps and small expenses it would take to make it work were too much for us. We didn’t have the money for those kinds of luxuries.

We did have the money, but we didn’t. We both worked full-time, and made a decent income between us, even if we each got started a bit late in our careers. But we had debts and many other expenses and somehow both our incomes always left us wanting. When I became overwhelmed with our debt, and realized the years it would take to pay it all off, even without including the interest rates, my husband would tell me that everyone was in debt, it was just how the world worked.

And I believed him.

Which is possibly why I ate cereal for dinner.

I was in the middle of the series "Nurse Jackie." I’d started watching it on a whim, needing a new show after finishing "Happy Valley." I’d seen the pilot before, or at least parts of it, but had never seen anything further; but I loved Edie Falco, heard it was a good show, and was desperate for something to watch, so I’d picked it up and gotten immediately hooked (no pun intended). I didn’t consciously choose it. I don’t think I consciously did anything.

My empty cereal bowl sat on the coffee table, with a few remnants stuck against the side of the bowl, above the small puddle of milk. Chicken curled up next to me, and Rabbit sat on the back of the sofa, behind my head, and succumbed to the sights and sounds of my evening life.

At the start of the second episode of the evening, "Sleeping Dogs," I heard sounds from the bedroom. The heavy breath that came with his sitting up, and the quiet bear noise with a big yawn. I heard the groan as he stood and shuffled to the bathroom.

I kept watching the show, watching Jackie and Dr. O’Hara study X-rays of Jackie’s back. From the beginning of the series, Jackie had issues with her back. She had serious pain and had to take painkillers, which she obtained from the hospital pharmacist. When that pharmacist left, O’Hara helped with a prescription for oxycontin.

I heard the flush of the toilet and he walked out to the living room, one eye still closed, his face squinting against the light of the evening sky.

“Yeah, I don’t know what it is, you know? I just can’t seem to get enough sleep,” he said.

Moving like he was lost in a fog, he reached for his cigarettes. He shook the box and grabbed one with his mouth, his right eye still closed to the world. He tossed the box back on the table and searched under old mail, a mug of pens, a stained ball cap and a dusty old wallet.

“You seen my lighter?”

My thumb sat perched above the space bar, ready to press play.

He patted down his boxers and T-shirt, presumably thinking the lighter could be there. He walked back into the bedroom mumbling under his breath, and soon walked out with the lighter in hand.

He opened the front door, propped the screen door with his foot, and lit the cigarette. “So your day was good?”

“Yeah . . . looks like we’re already sold out for the September event, which is awesome, and —"

“Did I tell you what John said today? Total bullshit. He’s an ass. They’ve been fucking up that Dearborn job for weeks, and I’ve had nothing to do with it, but John told me I have to go in and get it all right. Bull. Shit.”

“That sucks,” I said with little interest, studying the frozen expression on the hospital administrator’s face. “But I suppose that means that they know you can handle something like that.”

“That have that 'Sopranos' chick in it?”

I pointed to the cereal bowl.

He nodded and looked outside.

He tossed his cigarette toward the old potted plant beside the steps, closed the front door, and brought my cereal bowl into the kitchen. He always cleared dishes.

I continued watching the show, and he came back with a bowl of cereal and a glass of water. He sat down next to me on the sofa, sending Chicken to jump up on the back next to Rabbit.

The show continued and he watched and ate. His breathing was heavy, but not labored. It was usually like that on evenings like this. It was almost like he had to hold his breath for each bite, and then when he realized that he could still breathe when he got the food in his mouth, he’d let out a huge exhale.

We sat like that for a while. He finished his cereal and placed the bowl on the table, and I continued to watch Jackie casually change O’Hara’s oxy prescription from zero refills to ten.

I noticed out of the corner of my eye that he’d been holding his glass up to his mouth for a while. I looked over and he’d nodded off, the water in the glass tipped slightly.

I didn’t say anything. I used to whenever he’d nod off, to try to prove it to him or make him aware of himself. And there were a couple of times I filmed him with my phone, but it never came out very clear, and it made my stomach churn to watch the video later. So now I just let it happen. It didn’t seem to make a difference either way.

He came to and took the drink of water, and looked over at me. “What?”

“You tired?” That was all I could ever think to say when it seemed obvious to both of us what was going on.

I started the show again. O’Hara storms into the MRI offices demanding to know why they weren't helping her friend, as Jackie helps a man having a seizure and steals the drugs he happened to have in his jacket pockets.

The MRI team informs O’Hara that there’s no Jackie Peyton in the system, that the X-rays couldn’t have been hers. It slowly dawns on O'Hara that her friend had lied to her. Completely lied.

I turned to my husband, his head had fallen forward.

This was our life together: the constant sleeping, the raging, the stealing, the pawning of everything of any value, except for the television so far, the manipulating everyone out of money, and, I suddenly realized, the lying.

That’s what addicts do. They lie. I knew there were lies that he had to tell, about why he needed the money. After years of denying it, I knew what it was for, but I somehow thought that by helping him out, I would help keep the bad stuff at bay.

But what if he lied about everything else too? What if he lied about wanting to get clean, about wanting a better life, about fixing the leak, about buying nicer clothes, getting in shape, eating better, cooking again, taking walks together, reading a book, getting a promotion at work? What of that was true and what of that was something he said to make me turn from the frustrated, angry wife into the sympathetic cohort in this difficult thing called life?

The episode ended as Jackie strolled down the sidewalk, toward home. With no remorse. She’d gotten what she wanted — another chance to get high.

As the silence sunk in, and the night sky grew darker, my heart began to break with the tiniest sliver. For the first time it occurred to me that he might never get help, that he would never get clean. For the first time I acknowledged the constant anxiety I harbored in my stomach, fearing every horrific outcome that was possibly right around the corner. I didn’t want to continue to slip into complacency when he went back out and used, or stole from me, or pushed us further into debt. I didn’t want this stupid, frustrating, vicious cycle to be the rest of his life, or the rest of mine.

And I wanted out.