“Love” and the rise of the bigendered sitcom 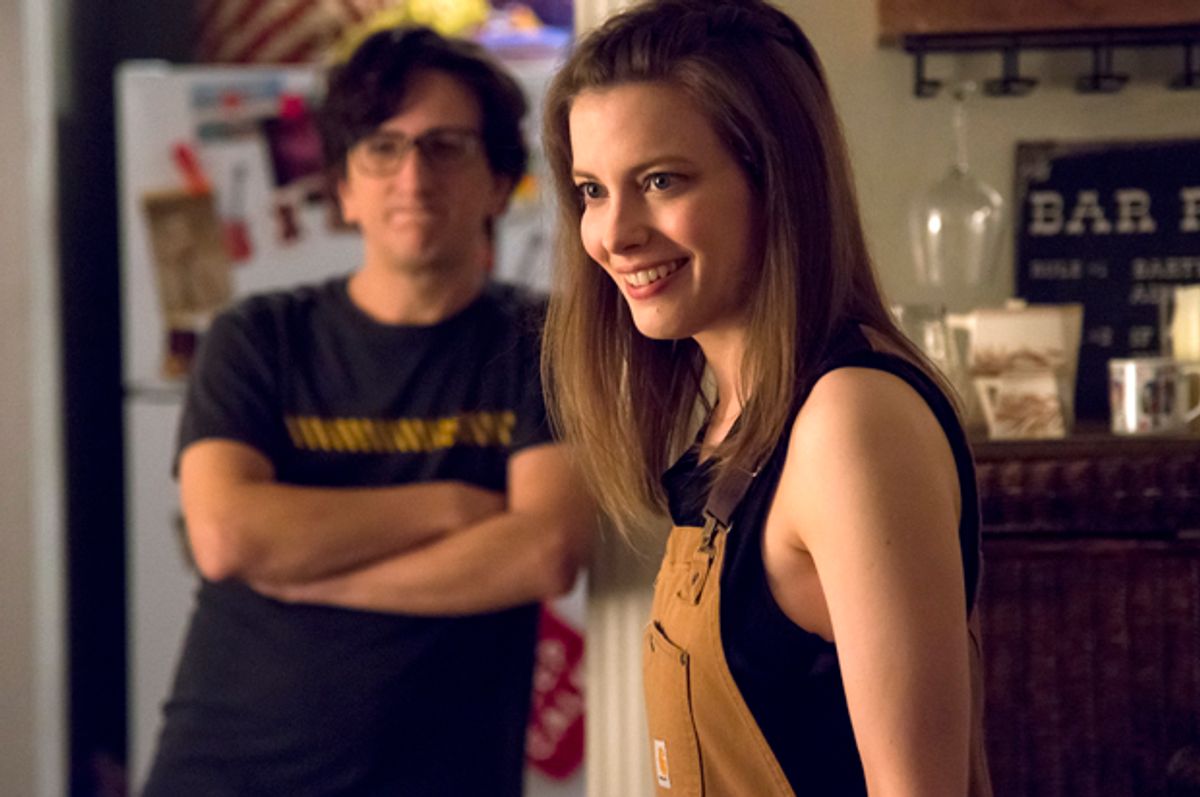 There’s an episode midway through the first season of Netflix’s Judd Apatow-produced rom-com series “Love,” in which dorky Guy (series writer and co-creator Paul Rust) squirms through an awkward first date with the cheery, eternal optimist Bertie (Claudia O’Doherty), that cuts to the heart of the show’s continued appeal.

Repeatedly inflating minor inconveniences into a date-sabotaging SNAFUs through his performative, concerned nice guy shtick — which, “Love” makes abundantly clear, is really just a kind of self-centered narcissism — Bertie attempts to bail on the date, texting her roommate Mickey (Gillian Jacobs, playing the true object of Gus’s affections) that things aren’t going well. Except: she accidentally sends the message to Gus instead. Crestfallen, he begins deliberately undermining the rest of the date: rudely checking his phone, belching, and complaining that his rear-end itches because he couldn’t be bothered to wipe properly. Soon, Bertie catches on that her date is now being intentionally, deliberately boorish, and starts playing along.

The two dig deep into a bout of insincere, deeply ironized badinage about climate change and 9/11 trutherism, proving that they’re both, deep down, sort of dickish. And so the viewer can’t help but wonder: “Who am I supposed to be rooting for?”

It’s a question that’s central to “Love,” which in in its second season on Netflix. And it’s part of what makes the show so compelling. Of course, muddling a viewer’s sympathies has emerged as the guiding M.O. of the premium cable-type programming that “Love” emulates. From Tony Soprano through to the bulk of prospective corpses on “Game Of Thrones,” viewers have become accustomed to “nuance” and “complexity” in their TV (anti)heroes. The idea of investing in a character who isn’t essentially evil or bad seems oldfangled, even quaint. It’s even truer of post-“Seinfeld” sitcoms like “Arrested Development,” “Curb Your Enthusiasm,” and “It’s Always Sunny in Philadelphia,” where the very point seems to be revelling in the selfishness, sociopathy and comically poor decision making of the show’s principals. Indeed, that the lovesick hipsters on “Love” are ultimately self-interested, and even a bit loathsome, is a common (and more-or-less valid) critique of the show.

But “Love”’s complicated sympathies extend beyond characterization, and its warts-and-all depiction of contemporary romance. In the first season, Gus was obsessed by his nascent career writing for a garbage paranormal drama called “Witchita” and oblivious to his prospective partner’s personal problems (namely: her booze, drug and sex addictions). In the new season, Gus gets serious about supporting Mickey’s efforts to rein in her dependencies, while she selfishly pursues an ex-partner with knowing duplicitousness — and perhaps as payback for Gus’s similarly low-key side-fling in Season 1. “Love” has us rooting for Mickey, then rooting for Gus, then shaking our heads at the pair of them. It is, to use the parlance of modern relationships, “complicated.”

The show systematically stymies any sense of easy gender identification on the part of the viewer, ping-ponging viewers between Gus and Mickey to the point that it becomes nearly impossible to prefer one to the other. Yet in this way, in its yoking of different sympathies between male and female characters, “Love” stands as a model of a new trend in TV: the bigender sitcom.

With a few major exceptions (Lucille Ball, Mary Tyler Moore, Roseanne Barr) the American sitcom has long stood as a male medium. Shows are devised around the comedic personas of a given, usually male, comic. From “The Honeymooners” through to “All In The Family,” “Home Improvement” and “Everybody Loves Raymond,” female characters were typically configured as tormented shrews or — even more insultingly — vectors through which the male stars could learn lessons, as if the point of a wife is to teach you how to be a better husband.

A 2004 report titled “TV Sitcoms and Gender” indexed some typical characters women have played in sitcoms since he 1950s, which are reduced to such stock archetypes as: “Woman who watches her ‘biological clock,’” “Sexy assistant” and “Matron/Working Battleaxe.” Such characterizations correspond to certain strains of theory around spectatorship and viewer identification, such as the film scholar Laura Mulvey’s notion (outlined in her essay “Visual Pleasure and Narrative Cinema”) of the “male gaze”: the idea that male characters typically serve as a surrogate for the spectator, whereas a female character is reduced to a role as “bearer of meaning, not maker of meaning.”

One may think that the imprimatur of Judd Apatow, that scion of modern dork-bro comedy whose schlubby male protagonists always seem to shack up with total tens (2007’s “Knocked Up” being the most egregious example), as a stain on “Love,” and irrevocably proof its narrowed male gaze. But the show’s other co-creators and chief writers, Rust and his real-life spouse, the comedian Lesley Arfin, manage to maintain the wonky balance between genders, and the slipperiness of spectator sympathies as it shifts between male and female perspectives. “Love” is a show devised, at pretty much every level, for both male and female-identifying viewers.

Like “Love,” “Divorce” is similarly complicated (and complicating) in its depiction of gendered squabbling. First, the viewer sympathizes with the hapless lug Robert, who vomits on his shoes when he’s blindsided by his wife’s request for a divorce. When we learn that Frances has been carrying on an affair with a sneezy literature professor (Jemaine Clement), that bond only strengthens. But then it's revealed — during a hilarious couples therapy session — that Robert had long ago entertained his own fantasies of extramarital infidelity, only to be stymied by the 9/11 attacks. He told his wife he was delivering supplies to first responders, when he was actually en route to a Manhattan hotel for a rendezvous with an old flame.

At first glance, sitcoms like “Love,” “Divorce” and “Catastrophe,” may seem to simply be keeping score. Mickey wins this round, then Gus, then Mickey closes in the for a heart-wrenching knockout blow. But their actual structure reveals something more meaningful. Instead of a viewer merely commiserating with one character or the other, or rooting for the proverbial home-team in terms of gender identification, these shows create character dynamics are actually evolving. One perspective is complicated by the other, then an equilibrium is reached. Then that symmetry is further complicated by another perspective, and so on, and so forth, as the characters themselves grow, or regress, or try harder, or revert to blinkered pettiness and cruelty.

It’s sort of reminiscent of “The Disappearance of Eleanor Rigby,” a 2013 film triptych by American filmmaker Neil Benson that viewed a relationship through the eyes of the guy (James McAvoy) in one version, the woman (Jessica Chastain) in the other, and then the couple taken together, in a spliced-together version called “Them.” The key distinguishing factor is that bigendered sitcoms such as “Love” or “Divorce” never simply split the difference. Even when a middle ground, a sense of harmonious gender parity, is established, it’s just as quickly undermined. It’s a movement of plot and characterization that is, to use the fancy-pants philosophical term, dialectical.

It’s far cry not only from standard sitcom patterning, which long privileged the dopey male gaze, but even from longer-standing configurations of understanding gender in pop culture. Best-selling relationship books like John Gray’s “Men Are From Mars, Women Are From Venus” or Steve Harvey’s “Think Like A Man” titles, or even whole strains of standup comedy and sitcoms that focus on the structuring differences between genders, have a way of flattening opposing groups into objects, to be studied and understood, like anthropological anomalies.

By contrast, the new bigendered sitcoms dig towards a deeper empathy, wresting the viewer’s identification and compassion between genders, and simulating something closer to genuine perspective. In “Love,” as in love, and as in life, we’re all petty and desperate, flailing towards something better. And we’re all, deep down, capable of being more-than-a-little dickish.