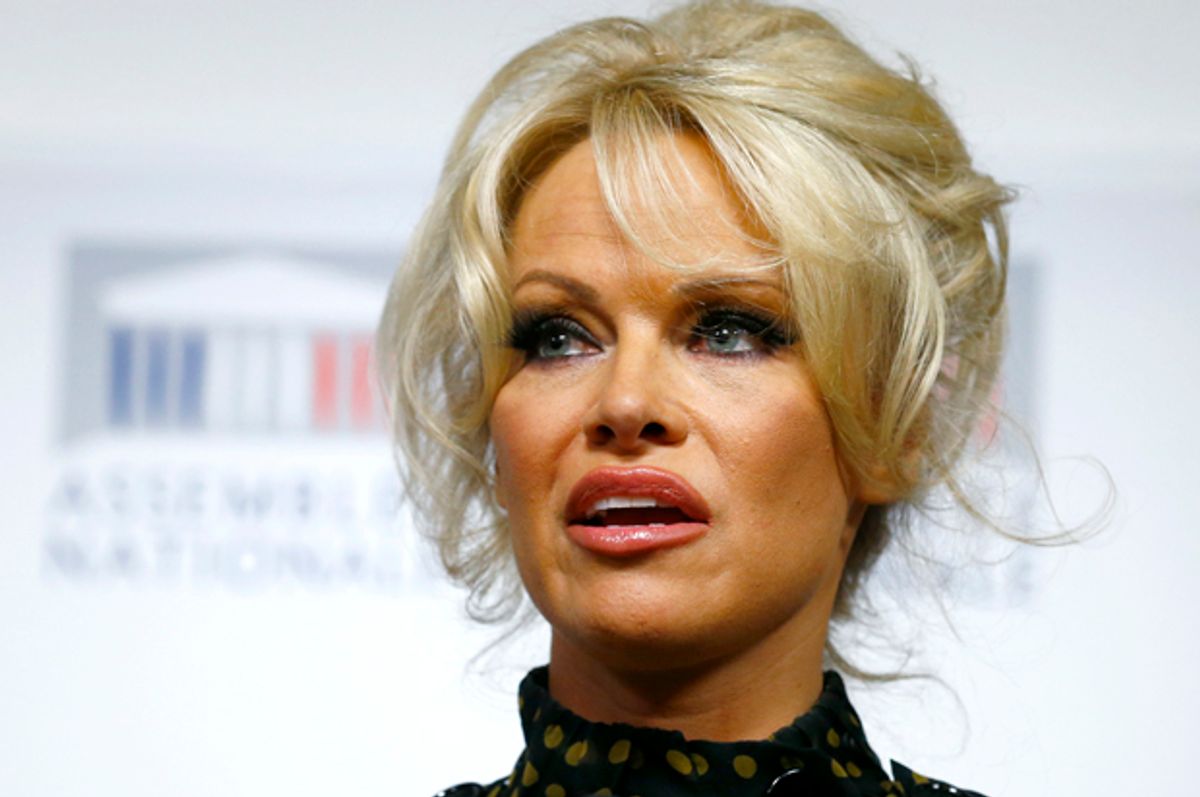 Pamela Anderson may or may not be dating Julian Assange, but it looks like she's writing poetry about him and his native land. We think.

In the newest blog post on her website, the former Playboy playmate and "Baywatch" star wrote a bizarre poem to Sweden. Or, about Sweden? It's unclear, but Sweden was mentioned.

In the poem, titled "Skavlan, Sweden," Anderson addressed her relationship with the whistle-blower in a stream-of-consciousness style that seems to cover almost as many topics as words used. The almost 1,500-word poem starts with Anderson calling Sweden a "beautiful and progressive country."

The seemingly directionless letter then goes on to touch on female empowerment, solutions to overpopulation, Anderson's work with PETA and her new book on "sexy kindness." She then abruptly offered praise for clothing brand H&M's alternative clothing initiative and said she and PETA hope the brand remains cruelty-free.

Anderson then jumped back to praising progressive countries, saying she feels that "the good out weigh the bad":

In general-
My feelings about super progressive countries-
and cultures-
Are
that the good out weigh the bad-
of course-
but,
We should also be sensitive to any potential down side.

Still unclear on what those "good" and "bad" things are, exactly, and what those downsides may be.

Again, without any warning, Andrson moved right along to her next topic: today's dating culture. From there, the letter took on a slightly more streamlined form: Anderson's thoughts on dating culture led to her feelings on female empowerment, which led to her opinions about women faking orgasms, which then led to her thoughts on — overpopulation.

Her writing then went on to describe her feelings on love and sensuality, while plugging her new book, "The Sensual Revolution." At last, just as abruptly as her previous subject changes, Anderson charged into her relationship with Julian Assange:

"I am concerned," she wrote, encouraging Sweden to "think progressively" and help Assange. She asked Sweden to drop charges against the controversial whistle-blower, calling him a "kind and deeply empathetic person, uncompromising on principle." The WikiLeaks founder has been living inside the Ecuadorian Embassy in London since 2012, while escaping legal persecution in Sweden.

Anderson has been visiting Assange at the embassy once a month since October 2016. Her poem concludes with a quote from Assange and one more plea, in the form of the hashtag #standwithassange.

It's clear from the letter that Anderson feels strongly on the subject, despite her roundabout way of getting to the point. One thing is for sure: Pamela Anderson put the "free" in "free verse poetry."