So much for the populist presidency: Donald Trump has failed to learn the lessons of his own victory 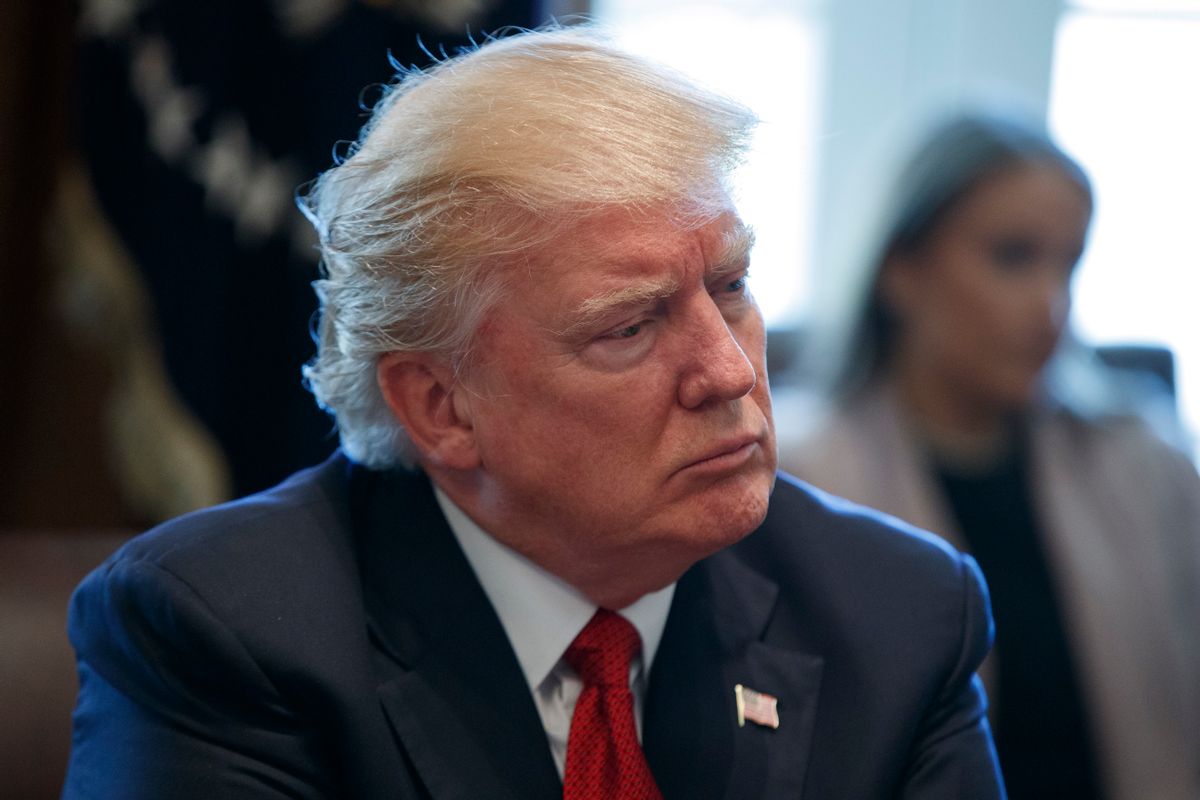 President Donald Trump listens in the Cabinet Room of the White House in Washington, Wednesday, March 29, 2017. Sixty-two percent of Americans turned thumbs down on Trump’s handling of health care during the initial weeks of his presidency, according to a poll by The Associated Press-NORC Center for Public Affairs Research. It was his worst rating among seven issues the poll tested, which included the economy, foreign policy and immigration. (AP Photo/Evan Vucci) (AP)
--

As he began his conquest of the Republican Party in the middle of 2015, Donald Trump provoked an intense amount of internal opposition, not just for his controversial statements and insult-comic shtick but also because rhetorically, the fast-talking New York businessman was a very different sort of Republican.

Instead of singing the praises of entrepreneurship and desperately trying to tie himself to the hems of Ronald Reagan’s garments, Trump spoke of “the forgotten men and women of our country.” Instead of boasting of all the departments he’d slash to the bone or even eliminate, Trump said he’d “take care of” rural voters, black voters, veterans, and pretty much everyone else.

Instead of promising to promote “freedom” by reducing health care spending, Trump effusively praised Canada's government-provided health care during the first Republican presidential candidate debate in August 2015. A month later, in an interview with CBS, he did it again.

Everybody's got to be covered...

This is an un-Republican thing for me to say because a lot of times they say, "No, no, the lower 25 percent that can't afford private." But I am going to take care of everybody. I don't care if it costs me votes or not. Everybody's going to be taken care of much better than they're taken care of now.

This rhetoric was greatly disturbing to the twin elites who control the American right.

The “conservative establishment” blanched at Trump’s gauche behavior and seethed as he continued to poll ahead of their anointed candidate, Sen. Ted Cruz, despite the former TV star's flagrant disregard for their beliefs. Besides declining to recite the economic shibboleths, Trump routinely reminded them that he had no interest in the Christian nationalism that undergirds much of American conservatism (in contrast to Europe).

Asked in July of 2015 if he’d ever asked God for forgiveness of a sin he’d committed, Trump said he couldn’t recall doing it. "I think if I do something wrong, I think, I just try and make it right. I don't bring God into that picture. I don't,” he told a gathering of Iowa evangelicals. All he needed, he said, was to “drink my little wine … and eat my little cracker.”

A few months later, he tried to put money in a Communion plate.

The so-called Republican establishment — in many ways less powerful than the conservative establishment — was also continually scandalized by Trump’s behavior and policy rhetoric. Perhaps even more outrageous in their minds, Trump ran his campaign in a manner that was almost the exact opposite of the recommendations the GOP had given itself in a report commissioned after 2012 nominee Mitt Romney was conclusively defeated by Barack Obama in an election Republicans believed they would win.

The conservative establishment and the GOP leaders it despises rarely agree on anything. In late 2015, however, both groups were confident (like most political observers) that Trump was headed toward electoral disaster.

Obviously, that isn’t what happened.

Since Trump’s unexpected triumph, many political observers have tried to divine where the Democrats went wrong. Nearly all the pundits seem to agree that we’ve entered a new populist era.

Judging from the policies he has actually pushed and the cabinet of billionaires he has hired, however, Trump  does not appear to agree with this assessment. Instead of promulgating populism, America’s new president has instead backed a health care plan that would have stripped away health insurance from tens of millions of the people he promised to “take care of.” He's sponsored a budget that prioritizes random cuts over doing the job right.

Everyone’s been talking about the lessons that need to be learned from 2016. As it happens, Donald Trump appears not to have learned anything from his own election.

In a surprisingly frank essay for Politico (one which no conservative would have dared to publish even two years ago), National Review editor Rich Lowry notes the immense gap between the realized Trump and the promised one:

Trump, for his part, has lacked the knowledge, focus or interest to translate his populism into legislative form. He deferred to others on legislative priorities and strategies at the outset of his administration, and his abiding passion in the health-care debate was, by all accounts, simply getting to a signing ceremony.

In light of all this, the product of the Ryan-Trump partnership on health care was a bill bizarrely at odds with a national election Republicans had just won on the strength of working-class voters. Under the GOP replacement, fewer people would have had coverage, and workers further down the income scale would have been particularly hard hit. For whatever reason, neither of these facts seemed to exercise the White House, at least not enough to try to do anything to fix them. …

The range of possible outcomes of the Trump presidency is still wide. Unexpectedly, one of them is that his most die-hard populist supporters will eventually be able to say that Trumpism, like socialism, hasn’t failed, it’s just never been tried.

It’s a truly bizarre situation. Donald Trump didn’t break the Republican Party or the conservative movement. His hostile takeover merely showed how fundamentally broken they already were. Instead of crafting policies that enshrined conservative values in a way that was responsive to the needs of the American people, Republicans instead had doubled down on ideology.

They convinced themselves that the failures of George W. Bush weren’t because his political team had crudely tried to transmogrify a ragtag bunch of Islamic terrorists into a reincarnation of the Soviet Union. Instead, Bush failed because he had betrayed “true conservatism,” whatever that actually meant in practical terms. (Judging from the legislative accomplishments of the Freedom Caucus, it means essentially nothing.)

In poll after poll for decades, the Republican electorate has been clamoring for something different from its elites. They support higher minimum wages. They want more spending on health care. They support higher taxes on the wealthy. Those perspectives have only grown as the country has struggled to recover from automation and the recession of 2008. Even now with the election of a self-proclaimed "blue-collar billionaire," none of that seems to matter to the conservative elites.

In a deeply personal Atlantic essay describing his own personal struggles against the conformist stupidity of the conservative establishment, David Frum argues that the GOP’s failure to pass the incoherent and compassion-free mess that was the American Health Care Act signals the beginning of a new future. One where Republicans finally realize that being the only wealthy country in the world that does not provide health care to all citizens is the worst form of “American exceptionalism.”

We’re too close to the prediction to see when or even if Frum will be proven correct.

Ironically, it’s the market that will decide whether conservatives can get over their capitalism fetish.

As long as there are enough gullible billionaires pining to roll back the remnants of Franklin D. Roosevelt's New Deal, or enough evangelicals looking to turn Jesus into the prince of this world, the transformation of Republican politics Frum hopes for will remain far away.

Free market fundamentalism has no chance of ever becoming popular. But as long as someone’s willing to keep paying for it, it’s not going anywhere.