Weekender: Sweet Jesus, we survived another one 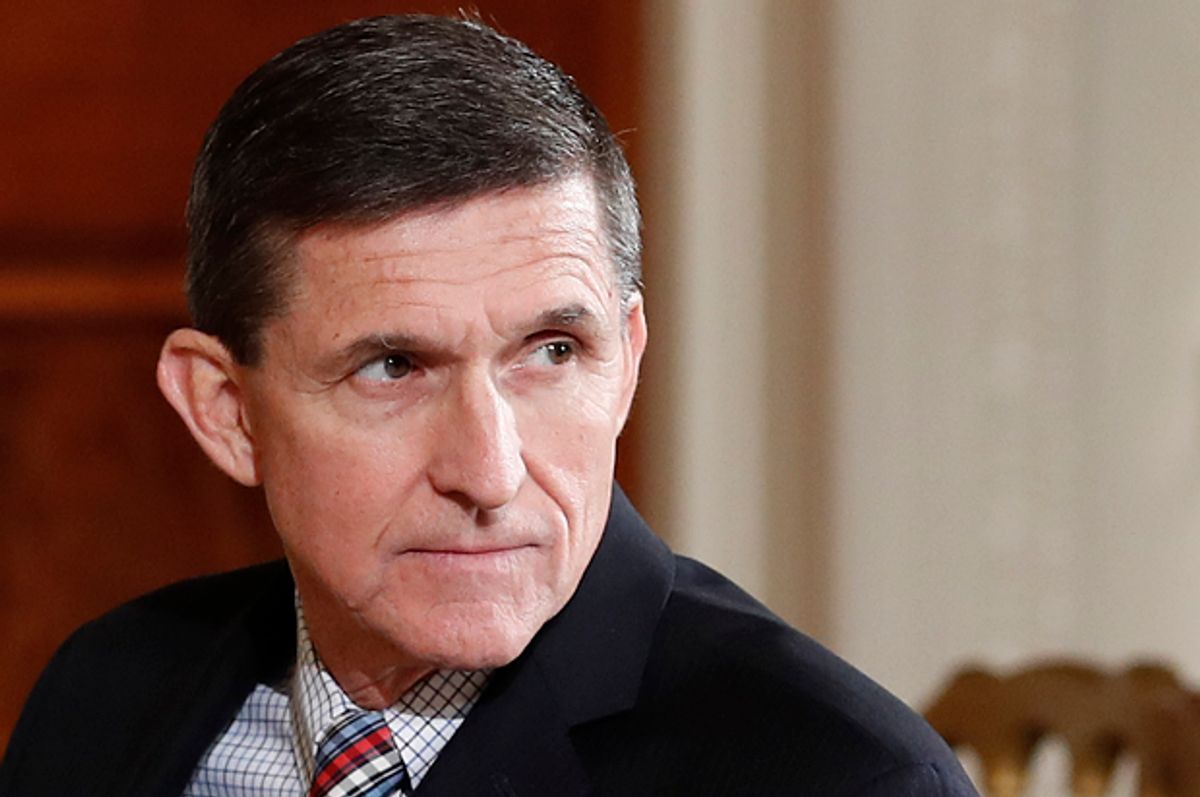 It feels like an impossibly long time ago right now, before ole Lock Her Up Flynn dropped to his knees begging his lawyer to cop a plea, but our week got off to quite an exciting start with the news that the former National Security Adviser met with two representatives of the Turkish government in September to discuss kidnapping Turkish cleric Fethullah Gulen from his place in the Poconos and spiriting him away back to Turkey to face the certain wrath of Turkish President Erdogan, who is convinced that somehow Gulen ordered and controlled the so-called coup attempt against him last year. Former CIA Director James Woolsey was good enough to inform us of this possible criminal enterprise almost exactly six months after the meeting took place at the cushy Essex House Hotel in New York City, a few blocks from Trump campaign headquarters at Trump Tower where Flynn was then a close adviser to then candidate Trump. Nice of Woolsey, huh? Back in September when news that Trump’s campaign adviser Flynn was plotting kidnappings over room service at the Essex House, you think it would have influenced things in the election if Woolsey hadn’t kept his trap shut. Thanks, Woolsey, you worthless asshole.

But not to worry. A couple of days later came the Big Pivot from the failure of Death Ferret Paul Ryan’s tax-cut-masquerading-as-a-health-plan to plain old tax cuts for the rich, which Trump and House Republicans finally got together and decided would be a really, really good idea, because, see, tax cuts for the rich will be so much easier to pass than stripping every goddamn health benefit in the world from the poor and sending them back to the emergency rooms was, a plan that ended up with the support of exactly 17 percent of the American public. I guess we’ll see now how the Death Ferret Tax Plan to tax the groceries of the poor while cancelling out taxing the stock profits of the rich will be. Good luck with that Trumpster and Death Ferret. You’re going to need it. But then, maybe the boys will get some cover from the big move the Raiders will be making from the pot-holed streets of Oakland to the bright lights of Vegas…as soon, anyway, as the good people of Nevada vote to spend about one billion of their tax dollars building super sky suites for billionaires in a brand new luxo-stadium. Good luck with that vote, Raiders. You’re going to need it.

Things settled down for the next couple of days with regular old around-the-clock bullshit on Capitol Hill as Democrats ran to every mic-stand they could find to “demand” the resignation of Dim Bulb Nunes from his post as chairman of the House “Intelligence” Committee. You know how that dance goes, don’t you? A whole bunch of powerless gray suits with salt-and-pepper comb-overs scream into the muffled ears of right wing Republican loons that they should suddenly find it within themselves to be “reasonable” and think of “country first” rather than “party first” and throw their golfing buddy Nunes into the darkness of the the nearest shit-well, and you know the way that dance ends, don’t you? With the limp Dems out there on the dance floor doing Mickey’s Monkey with each other as their Republican “friends” (don’t you love it how these assholes always call each other “my friend”?) retire to watering holes on Capitol Hill to swill bottles of Petrus with their wing-tipped brethren from the canyons of K Street to discuss relaxing regulations on the drug companies so they can make even more mongo-bucks shipping trainloads of oxycodone to their constituents back in No-Dunk Nebraska and All-In Alabama and Suck-Street South Carolina. But not to worry. Nobody was paying attention to the utter and complete collapse of the Trump-Russia investigation after everybody started showing scenes from Mosul of the bombed out building covering more than 100 dead Iraqi civilians that resulted from a U.S. airstrike gone badly wrong. Do you think anybody stopped to ask the White House if this was part of their 30-day plan to Eradicate Isis? Blame Trump or his sterling minions over in the Pentagon for a fuck-up that they would have had 16 Benghazi-style hearings to investigate if it had happened on Obama’s watch? Not a goddamned chance in hell.

By week’s end, we were assured that All Is Back to Normal because Bob Dylan would soon be showing up in Oslo to pick up the Nobel Prize he was awarded last year. Good old Bob. Right on time. Meanwhile came the big announcement that Trump will meet with Chinese President Xi Jinping next week at Mar a Alamo in Palm Beach. They are readying the cannon emplacements on the parapets as we speak in case Andrea Mitchell and April Ryan show up to cover all the Golfing and Galas, so Press Secretary Spicer will be well-protected. Back in Washington we were being told Not To Worry because the Graybeards of the Senate would be On the Job investigating Trump’s Russia connections, just so long as they took place last year. All those spies currently running around the Capital doing stuff like passing “intercepts” to Dim Bulb Nunes in the Dark of Night, well, don’t worry about them, because the Senate “Intelligence” Committee won’t be investigating anything that happened after January 20 when Trump showed up with about 124 of his friends on the Mall to get inaugurated. Nothing to see here. Look! Over there! There’s a Democrat with a Snipe! Benghazi! Emails! Stolen debate questions!

Who knew that Making America Great Again would be so easy? All we’ve got to do is send a few redneck Republican congressmen skulking around the White House at midnight hunting "evidence" that Trump's Insane Clown Obama Tweets were right on the money, then turn old Attorney General Sessions loose to run around the country to lift cobblestones in every "sanctuary city" looking for illegal aliens, and while we’re at it we can send EPA’s Scott Pruitt in his blue and white striped Casey Jones Engineer hat out there to personally drive coal trains to power generating plants where workers will soon be up on the smoke stacks disassembling pollution control devices, and let’s make sure Secretary of State

Tillerson knows where to find his jet so he can fly around the world with his personal Blonde Bombshell Amateur Hour Foreign Correspondent next to him in his lie-flat seat leaving poor Andrea Mitchell pining for the Good Old Days back in Foggy Bottom, and we’re going to send someone over to Energy to help Rick Perry look for the key to his desk so he can unlock his Nuclear Secrets drawer, and let’s not forget to remind Mnuchin over at Treasury to turn over the presses to his buddies at Goldman Sachs so they can print some extra money for their coffers, and don’t forget to tell Mattis over at Defense to send the 82nd Airborne to Save the Day in Iraq and remind him to ship some body bags over to Mosul so they can clean up after his latest bombing run, and tell Kelly over at Homeland Security to get busy digging the first post-hole and writing the first check for the goddamned wall Mexico is supposed to be paying for, and somebody Agriculture Secretary Sonny Perdue to hammer up some cages for all those Perdue chicken houses so he can bring a halt to this goddamn hippie cage-free chicken crap, and it wouldn’t be a bad idea to send an intern over to the Department of “Education” to help Betsy DeVos find her diploma so she can prove she actually went to college, and somebody get over to Housing to help Ben Carson make his case that an HUD housing voucher is a form of slavery, and let's see, did we leave anyone out? No? We're good here? Okay.

So what are the odds for next week? 5-2 that Flynn’s flipping plea for immunity is going to flop. How about the two Backstreet Boys from the National Security Staff who led Nunes on his midnight snipe hunt at the White House? 10-1 they sing. Even money that Spicer turns his fire hose of conspiracy theories, hoaxes and Trump tweets on the White House press corps again.

I don’t know about you, but the way things are going, my wallet stays in my pocket.