Egypt goes from bad to worse: Under President Sisi, the nation longs for the good old days of Mubarak

Five years after the Arab Spring, Egyptians under Abdel Fattah al-Sisi are further from democracy than ever 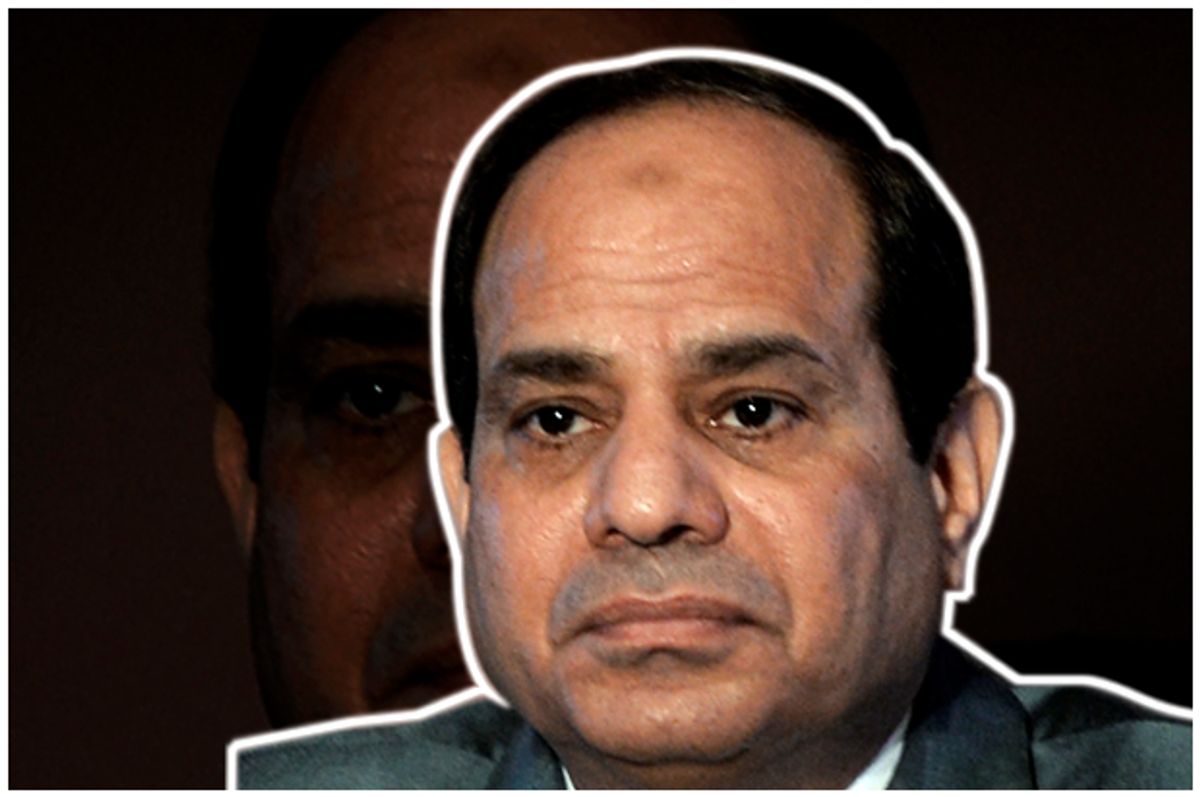 Egyptian President Abdel Fattah al-Sisi is visiting Washington. Since being elected in 2014 after orchestrating a coup d’état in the summer of 2013, the Egyptian leader has sought a White House meeting. President Barack Obama resisted, given the iron fist Sisi has employed to establish control over Egyptian society. The country is now among the top jailers of journalists in the world, thousands of others have been arrested for their opposition to the government, and Egyptian security forces killed about 800 people on a single day in August 2013.

Sisi’s visit signals the end of this period of mistrust and tension between the two countries. Egyptian officials were extremely pleased when, after meeting Sisi last September in New York, then-candidate Donald J. Trump’s campaign declared, “Mr. Trump expressed to President el-Sisi his strong support for Egypt’s war on terrorism, and how under a Trump Administration, the United States of America will be a loyal friend, not simply an ally, that Egypt can count on in the days and years ahead.”

It is hard to know for sure given the Trump administration’s policymaking style, but it seems clear that the White House wants to turn back the clock to the Hosni Mubarak era. During those three decades, successive U.S. administrations supported Mubarak because he ensured that the Suez Canal would stay open, maintained peace with Israel and kept his boot on the throat of Islamists. For the Trump White House, with its emphasis on fighting extremists, a Mubarak redux makes a lot of sense. American officials will likely discover that this is going to be hard. Egypt is very different today, and does not necessarily compare well to the country that Mubarak once ruled.

On March 24, Mubarak left the Maadi military hospital where he had been more or less under arrest since the summer of 2011. The former president faced charges of ordering the killing of protesters during the uprising that had toppled him six months earlier, misappropriating funds for the presidential palace, and various forms of graft and corruption. Having been cleared of all charges and with all appeals exhausted, the man whose ignominious fall from power six years ago was to have begun Egypt’s path to democracy drove across greater Cairo to a villa in Heliopolis, an upscale area of the Egyptian capital.

Mubarak's release prompted articles in the New York Times and Washington Post decrying the state of Egypt and the Egyptian state. Mubarak is mostly vilified in Egypt — though he has his supporters — and remembered in Washington as the man who succumbed to the combination of his own imperviousness to change, authoritarian outlook and effort to hand the country over to his son who had no known qualifications for leadership. This unsparing portrait is true but also imprecise. The Mubarak era was far more complicated and, in important ways, more successful than the post-Mubarak commentary suggests.

In between the time that Mubarak took the oath of office on Oct. 14, 1981, and his fall on Feb. 11, 2011, Egypt underwent a wide-ranging socioeconomic transformation. It was not South Korea, a country against which it is often measured, but Egypt had progressed. According to the World Bank, life expectancy for both males and females approached developed-world levels. Both the birth rate and the infant mortality rate dropped significantly, and the annual rate of population growth began to level off. Immunization of children for tuberculosis, DPT (diphtheria, pertussis, and tetanus), hepatitis B, measles and polio reached from 96 to 98 percent; three decades earlier, they had ranged from 41 to 57 percent. The age-dependency ratio — a measure, albeit not perfect, of the proportion of the population that is financially dependent on others — fell by almost a third, which reduced the overall burden on Egyptians in the workforce as well as the government.

Almost three-quarters of the population was literate, a figure that remained too low but was still an improvement. And almost the entire population had access to electricity. This is not to suggest that Mubarak was a great man, or that these changes would not have happened without him, or that his economic team had finally resolved Egypt’s perennial economic problems. But the country was hardly stagnant during his time in power. Still, there was a widely held perception that precisely the opposite was true, which contributed to the 2011 uprising.

To be fair, Sisi has only been in power for a fraction of Mubarak’s long tenure, and has undertaken some highly touted (mostly by the Egyptian government) economic reforms that may produce positive results. But in the meantime, Egyptians are certainly poorer than they were during the latter part of the Mubarak era. In addition to the subsidy reforms and other positive measures, Sisi has undertaken a number of economic decisions that are curious, including constructing a Suez Canal bypass that the Egyptian government has endlessly hyped as the “New Suez Canal” and committing resources to the construction of a new capital. These are projects that might be defensible when times are flush, but not when the country needs to climb out of the economic mess that the instability and poor decisions of the last six years have wrought.

Like Sisi, Mubarak jailed his political opponents, intimidated journalists, abused bloggers, crammed the political arena with fake nongovernmental organizations and enjoyed the indulgence of a rubber-stamp parliament. But it was easier to express oneself in Egypt in the 1990s and 2000s than it is today. Egyptian liberals loathe Mubarak, and some freely admit that another uprising would be a mistake, but not because of their misbegotten support for Sisi when, on July 3, 2013, he arrested former President Mohammed Morsi -- the man who had made him defense minister -- and reset Egyptian politics. Rather, it is because the country has become more illiberal with every outpouring of popular frustration and anger.

For all of the gross violations of freedom of expression under Mubarak, during the last decade of his rule newspapers, magazines and other outlets leveled withering criticism of the government and even the president and his family. Only the military remained taboo. Mubarak’s opponents were well aware of the risks they faced, but for the most part operated openly because they understood the informal rules of the game. Now there are no rules, leaving journalists, activists and other opponents of Egypt’s political order vulnerable to the whims of the security services who, in Sisi’s Egypt, flaunt their brutality with more confidence than before.

Then, of course, there is the central drama of Egyptian politics today: the showdown between the Egyptian state and the Muslim Brotherhood. In the early years, Egyptians often made fun of Mubarak. He was alleged to be dimwitted. He certainly lacked charisma, but until his last years in office he was a fairly shrewd political operator. He recognized that the Brothers could be usefully blamed for a variety of Egypt’s ills and, because they had deep roots in Egyptian society, that they would be costly to destroy. To Mubarak, the Brotherhood was a problem to be managed.

Sisi has taken precisely the opposite approach, declaring the Brotherhood to be a terrorist organization and unleashing the full force of his country’s security apparatus to root it out. The Brothers are not exactly the reformists that they, their supporters and a surprisingly large number of analysts have often portrayed them to be. In their early efforts to capture the state, they flirted with violence. When the Brothers eschewed political change by force in the 1970s, they sought to delegitimize it and mobilize Egyptian society in opposition to the state by providing social services and articulating a moralizing mission that resonated with the values of many Egyptians. They have also been consistently and perniciously anti-American and anti-Semitic. Even with this loathsome history, Sisi’s effort to rip the Brotherhood out of Egyptian society is unlikely to work. The organization remains deeply connected to Egyptian society and its members are too tenacious to give up. Rather, they are likely to take up arms against the state. This is a self-fulfilling prophecy that is politically useful for Sisi, but it is also destabilizing and polarizing for Egypt as a whole.

No doubt there is an air of familiarity to Egyptian politics. Sisi’s Egypt is a reflection of Mubarak’s Egypt, which was a reflection of Sadat’s Egypt, which was inherited from Gamal Abdel Nasser, who built the national security state in the 1950s and 1960s. Yet the combination of Sisi’s violence, his crackdown on expression and the impoverishment of his people sets him apart. It is early, of course. Perhaps Egypt’s economic reforms will produce prosperity and the Muslim Brotherhood will give up, which will pave the way for more open and consensual politics. Given the country’s trajectory, the reality is likely to be much different.

Values were never part of the American approach to Egypt, with the exception of brief moments during the presidencies of George W. Bush and Obama. But at least American presidents could make the argument that close ties with Egypt made sense, in part because Egypt was stable and shared Washington’s interests. Only if one defines U.S. interests solely in terms of annihilating extremists, as the Trump administration does, does this still hold true today.