Robotics revolution: To really help American workers, we should invest in robots

Without timely investment, China will overtake America, and could permanently put Americans out of work 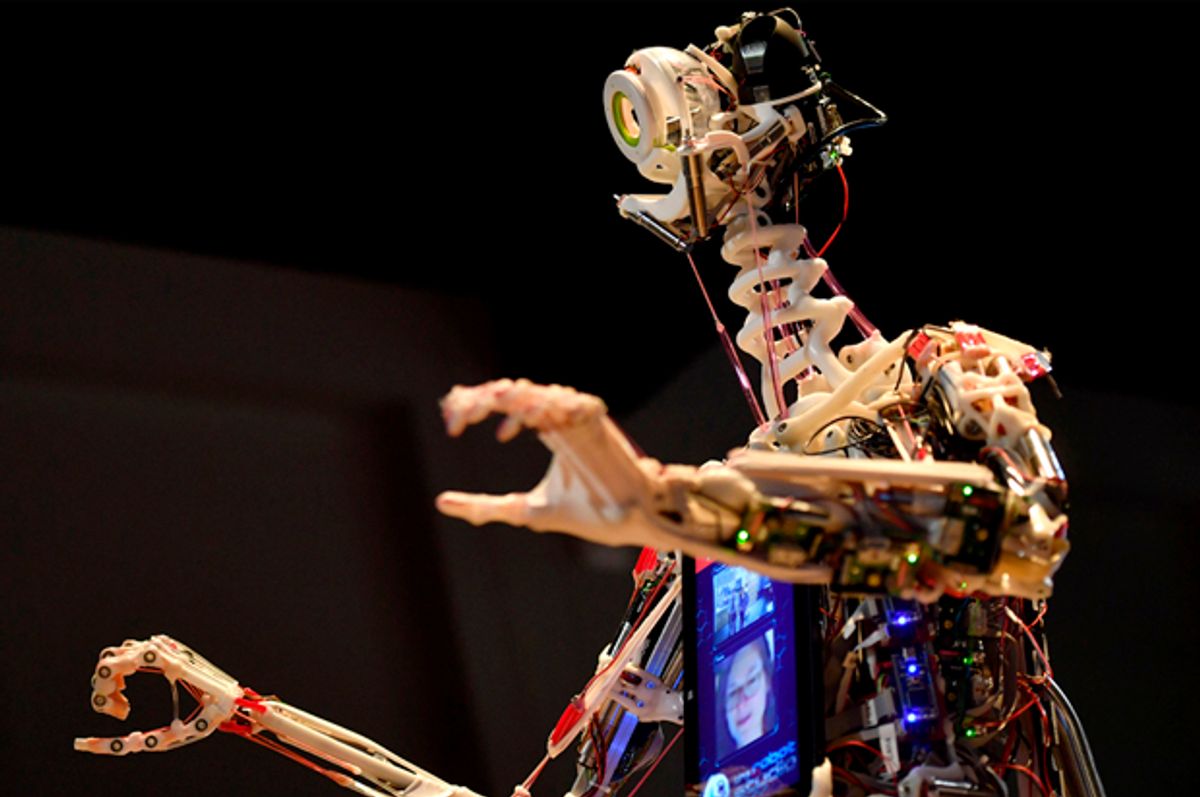 America’s manufacturing heyday is gone, and so are millions of jobs, lost to modernization. Despite what Treasury Secretary Steven Mnuchin might think, the National Bureau of Economic Research and Silicon Valley executives, among many others, know it’s already happening. And a new report from PwC estimates that 38 percent of American jobs are at “high risk” of being replaced by technology within the next 15 years.

But how soon automation will replace workers is not the real problem. The real threat to American jobs will come if China does it first.

Since the year 2000, the United States has lost five million manufacturing jobs. An estimated 2.4 million jobs went to low-wage workers in China and elsewhere between 1999 and 2011. The remainder fell victim to gains in efficiency of production and automation, making many traditional manufacturing jobs obsolete.

Though more than a million jobs have returned since the 2008 recession, the net loss has devastated the lives of millions of people and their families. Some blame robotics, others globalization. It turns out that those forces work together, and have been equally hurtful to manufacturing jobs. The car industry, for example, imports more and more parts from abroad, while automating their assembly in the United States.

As a robotics researcher and educator, I strongly advocate that the best way to get those jobs back is to build on our existing strengths, remaining a leader in manufacturing efficiency and doing the hard work to further improve our educational and social systems to cope with a changing workforce. Particularly when looking at what’s happening in China, it’s clear we need to maintain America’s international competitiveness, as we have done since the beginning of industrialization.

In 2014, China exported more, and more valuable, products than the United States for the first time. Many of these were made by the low-wage laborers China has become famous for.

Yet China has also emerged as the largest growth market for robotics. Chinese companies bought more than twice as many industrial robots (68,000) in 2015 than American companies did (27,000). China’s Midea — an appliance manufacturer — just purchased the German robotic powerhouse Kuka.

China has understood that its competitive advantage of cheap labor will not last forever. Instead, labor costs will rise as its economy develops. Look at FoxConn, for example, the Taiwanese manufacturing contractor of the iPhone known for the high-pressure work environment at its plants in China. The company already uses more than 60,000 robots, and has said it wants to use as many as a million robots by 2020.

That’s a bold goal, especially given the current state of robotics. At present, robots are good only at highly repetitive tasks in structured environments. They are still far inferior to humans in simple tasks like picking items from a shelf. But FoxConn’s goal of transforming its streamlined manufacturing line is definitely achievable. Many of the tasks now done by humans thousands of times a day can be easily automated — such as applying a puddle of glue, placing double-sided tape, positioning a piece of plastic, tightening screws or loading products onto a pallet.

The lesson here is simple: Some occupations will simply disappear, like those of weavers in the textile industry displaced by the power loom. We need to embrace this disruption if we want to avoid being taken out of the game altogether. Imagine if China is able to replace our low-wage jobs with its workers, and then can automate those jobs: Work Americans now do will be done here, or anywhere — but not by humans. FoxConn is planning its first plant in the United States; Soon, Chinese robots will be working in America.

The good news is that while many types of jobs will cease to exist, robots will create other jobs — and not only in the industry of designing new robots.

This is already beginning to happen. In 2014, there were more than 350,000 manufacturing companies with only one employee, up 17 percent from 2004. These companies combine globalization and automation, embracing outsourcing and technological tools to make craft foods, artisanal goods and even high-tech engineered products.

Many American entrepreneurs use digitally equipped manufacturing equipment like 3D printers, laser cutters and computer-controlled CNC mills, combined with market places to outsource small manufacturing jobs like mfg.com to run small businesses. I’m one of them, manufacturing custom robotic grippers from my basement. Automation enables these sole proprietors to create and innovate in small batches, without large costs.

This sort of solo entrepreneurship is just getting going. Were robots more available and cheaper, people would make jewelry and leather goods at home, and even create custom-made items like clothing or sneakers, directly competing with mass-produced items from China. As with the iPhone, even seemingly complex manufacturing tasks can be automated significantly; it’s not even necessary to incorporate artificial intelligence into the process.

Three trends are emerging that, with industry buy-in and careful government support, could help revitalize the U.S. manufacturing sector.

First, robots are getting cheaper. Today’s $100,000 industrial robotic arms are not what the future needs. Automating iPhone assembly lines will require cheap robotic arms, simple conveyor belts, 3D-printed fixtures and software to manage the entire process. As we saw in the 3D printing industry, the maker movement is setting the pace, creating low-cost fabrication robots. The government is involved, too: The Pentagon’s research arm, DARPA, has backed the OtherMill, a low-cost computer-controlled mill.

In addition, more people are programming robots. Getting a robot to accomplish repetitive tasks in industry — for example, using Universal Robot’s interface — is as simple as programming LEGO Mindstorms. Many people think it’s much harder than that, confusing robotic automation with artificial intelligence systems playing chess or Go. In fact, building and programming robots is very similar both physically and intellectually to doing your own plumbing, electrical wiring and car maintenance, which many Americans enjoy and are capable of learning. “Maker spaces” for learning and practicing these skills and using the necessary equipment are sprouting across the country. It is these spaces that might develop the skill sets that enable Americans to take automation into their own hands at their workplaces.

Lastly, cutting-edge research is improving the hardware needed to grasp and manipulate manufacturing components, and the software to sense and plan movements for assembling complex items. Industrial robot technology is upgradeable and new robots are designed to complement human workers, allowing industry to make gradual changes, rather than complete factory retooling.

To fully take advantage of these trends and other developments, we need to improve connections between researchers and businesses. Government effort, in the form of the Defense Department’s new Advanced Robotics Manufacturing Institute, is already working toward this goal. Funded by $80 million in federal dollars, the institute has drawn an additional $173 million in cash, personnel, equipment and facilities from the academic and private sectors, aiming to create half a million manufacturing jobs in the next 10 years.

Those numbers might sound high, but China is way ahead: Just two provinces, Guangdong and Zhejiang, plan to spend a combined $270 billion over the next five years to equip factories with industrial robots.

The stakes are high: If the U.S. government ignores or avoids globalization and automation, it will stifle innovation. Americans can figure out how to strengthen society while integrating robotics into the workforce, or we can leave the job to China. Should it come to that, Chinese companies will be able to export their highly efficient manufacturing and logistics operations back to the United States, putting America’s manufacturing workforce out of business forever.

Nikolaus Correll is an assistant professor of computer science at the University of Colorado.