“Stupid is stupid no matter what country you’re from”: What Bassem Youssef’s story of Egypt can teach Americans

Bassem Youssef’s “Revolution for Dummies” describes how he fled Egypt for the U.S., only to see Trump take power 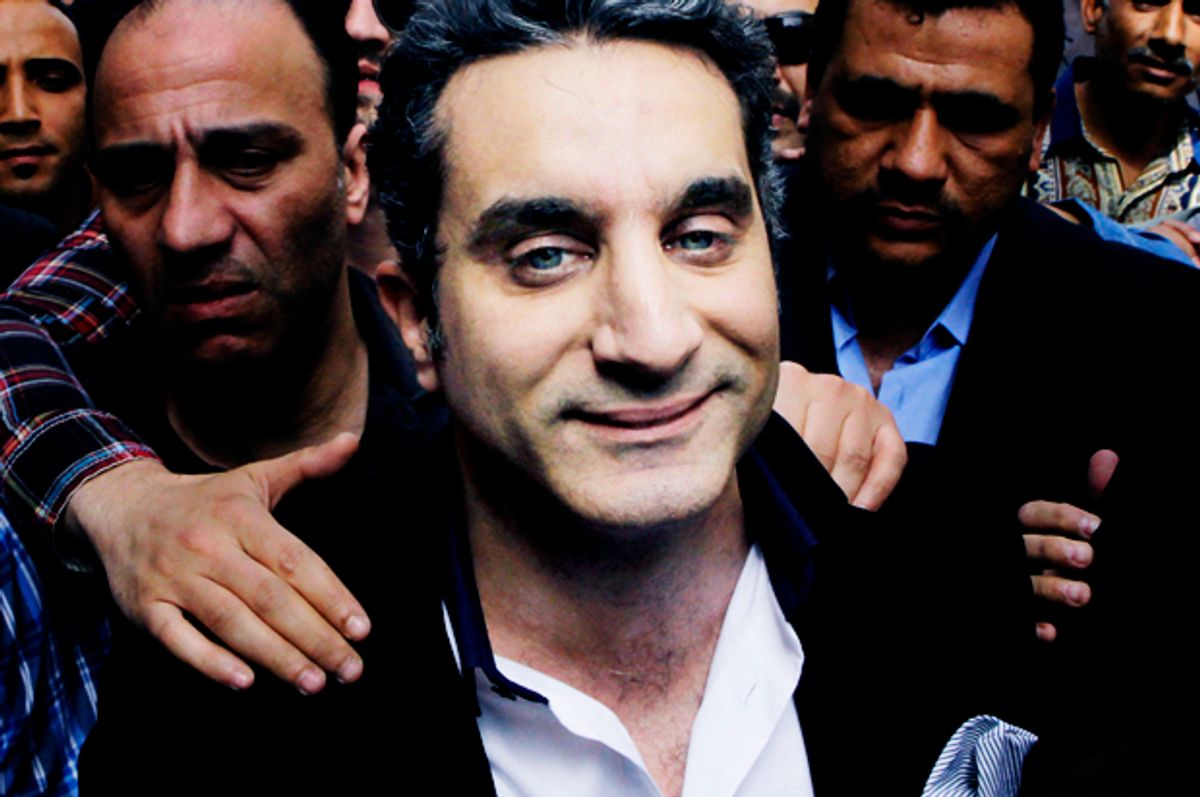 Bassem Youssef, often referred to as “the Jon Stewart of Egypt,” became a hero to Egyptians during and after the Arab Spring swept his nation. In 2011 he began a YouTube satire show that went viral. His YouTube series led to a television contract for “Al Bernameg” (literally “The Show”), which became the most popular TV program in the nation, reaching 30 million viewers — 40 percent of the Egyptian public.

His new book, “Revolution for Dummies: Laughing Through the Arab Spring,” tells the story of the rise of his show and its political fallout.

“Revolution for Dummies” is a smart, refreshing and hilariously funny account of Youssef’s story. It is filled with self-mockery, puns and funny asides. Youssef decided to tell the story of Egypt’s revolution in a way that is light and silly and easy to read, citing in contrast the useless (in his view) sorts of studies of the Arab world that emanate from Washington think tanks.

As the back copy jokes, “this book may be your best chance of acquiring some essential pseudo-knowledge of the Middle East. Then you can appear smart in front of your dumbest friends.”

But as is the case with all great satirists, Youssef’s wit glosses an extremely sharp and insightful analysis of Egypt, the Middle East and the power of satire. Following in the footsteps of his comedic inspiration, Jon Stewart, Youssef is a master at making us laugh while making us smarter.

Youssef’s story starts with the 2011 revolution in Tahrir Square that eventually brought down Egyptian leader Hosni Mubarak, who had been in power for 30 years. As the protests took place, Youssef launched his YouTube videos and they became a refreshing alternative to the mainstream media’s negative depictions of the demonstrators. Drawing more than 5 million views an episode, his videos were so popular that he soon landed a TV show.

While Egypt was politically transforming, Youssef was launching the first TV show in Egyptian history that mocked the political leadership and the media that supported it. His satirical wit was a welcome voice in a country that had never had seen unfiltered satirical political comedy on a TV screen.

Thrilled with the end of authoritarian rule, Egyptians celebrated their newfound freedom. But, as Youssef explains, the jubilance was short-lived: Their first elected leader, Mohamed Morsi, of the conservative Islamist group the Muslim Brotherhood, marginalized “anyone from a non-Islamic background.” Youssef tells the reader, “Morsi was like our own George W. Bush. He never failed to provide the show with the best material.”

Youssef and his team went after Muslim Brotherhood hypocrisies, building up his show’s fan base while simultaneously encountering a series of threats, attacks and pressure to stop their program.

As Youssef fought to keep his show on air in the wake of a conservative Islamist regime, the nation rose up again in protest, only to end up with a military coup. The event, which Youssef explains could not openly be called a coup, led to the “election” of former military officer, Abdel-Fattah el-Sissi. Youssef says that Egypt “replaced religious fascism with military fascism.”

And that’s when things got really weird for Youssef. All his former fans, including his mother, wanted him to back off his jokes and lighten up. Youssef felt his job was to satirize stupidity and that he was an “equal opportunity offender” but he learned that a significant portion of his fans only liked “satire as long as it was on their side.”

His show was threatened then suspended, and Youssef eventually decided to flee the country. His inability to do "The Show" under el-Sissi led him to conclude that “the new regime has less of a sense of humor than the Muslim Brotherhood.” And that’s scary.

Youssef has often described himself as a protégé of Stewart, but the truth is that Youssef is a master satirist in his own right. Clearly Stewart’s ability to use comedy to speak truth to power offered Youssef an important model as he developed his show, but Youssef has his own unique style of satire, one that is not derivative in any way.

His style balances a self-deprecating tone with biting mockery on all sorts of absurdities. In one situation that's also included in Sara Taksler’s new documentary on Youssef, “Tickling Giants,” Youssef and his team decided to mock the moment when President Morsi received an honorary doctorate from a Pakistani university in 2013.

Rather than ridicule the Muslim Brotherhood as anti-intellectual, Youssef and his team chose to mock the absurd hat that the university used as part of its doctoral garments. When Youssef wore the hat on his show, it was 3 feet tall and weighed 40 pounds.

According to Youssef, “that gigantic hat became the most iconic prop piece in Arab television history.”

Not everyone was laughing, though. “In the end that hat, coupled with other jokes, pissed off the wrong people,” he writes. Youssef was charged with “insulting the president” and “insulting Islam” among other things. Then to top it off, he showed up at the prosecutor’s office wearing the hat. He faced his adversaries with wit, grace and a huge sense of humor.

The charges were dropped, but the vicious cycle of threats to people connected with the show just began to spiral. Youssef and his friends and family were harassed, sued, arrested and some were ultimately forced into exile.

As his book reveals, Youssef’s satire was brave at a level that we simply can’t comprehend in the United States. As Stewart has described it, “Comedy shouldn’t take courage, but it made an exception for Bassem.”

It was his fearless desire to attack each and every abuse of power in Egypt, whether from the Islamists, the military or the liberals, that eventually became too much for those in power.

Youssef is a perfect example of a satirist committed to using his comedy to advance reason, logic and the truth against the distorted realities offered by politicians and the media. And that, of course, is why his book is of so much value to a U.S.-based reader today.

Well aware of the ways that people in the United States like to look down on the Arab world, Youssef pulls no punches in his book when he mocks U.S. perceptions of Egypt. Making fun of the absurd amount of money spent on U.S. elections, he quips, “in the Middle East assholes come for free.”

Then he adds, “plus you got Trump as president. So you’re not really in a position to mock our ‘democracy.’”

He marvels at the fact that he fled el-Sissi only to arrive in the land that would elect Trump: “Is it me? Am I bringing bad luck wherever I go? Am I dictator magnet?”

Showing us that he really is an equal opportunity offender, Youssef doesn't hold back from reminding his readers that the United States has its own fair share of zealots, authoritarians and morons. As he puts it, “stupid is stupid no matter what country you’re from.”

His book offers regular comparisons between Trump supporters and Egyptian fanatics, too. Having attended a Trump rally for his new show “Democracy Handbook” on Fusion, he admits he would “sometimes translate parts of speeches in my head and they would sound exactly the same as the ones back home.” He then adds, “The fear, the xenophobia, the hate, they all came in different shapes and forms; only they were wearing more expensive suits and had much pastier skin.”

He also observes that in Egypt, “fact-checking the authorities is looked upon as a form of mutiny against the country or God.” Sound familiar?

As if to highlight Youssef’s point about the parallels between el-Sissi and Trump, el-Sissi will make his first White House visit, it has been recently announced. The Guardian has reported, the Egyptian leader "and Trump have already shown a bond.” Former President Barack Obama never invited el-Sissi to the White House and condemned his regime for human rights violations.

Youssef ends his remarkable story of his valiant fight to use satire to poke fun at folly and help bolster democracy in Egypt, refusing to let his U.S. readers off the hook. “America, I hope you do something about that Trump," he tells us. "Consider this your warning for what is yet to come.”

Then he adds his characteristic, charismatic wink: “Honestly, I am running out of places to go and Canada is too fucking cold.”

Which leads to the question, exactly who are the “dummies” Youssef is referring to in his title “Revolution for Dummies?” Are they ignorant Americans? Fanatic Egyptians? Tyrannical leaders? People too stupid to think for themselves? Or those that just can’t take a joke?

I would say that the only way to find out the answer would be to read his book, but that would be silly. Youssef is clear that his plan is not to offer solutions. His real skill lies in helping us laugh, while teaching us to ask better questions.