A network of misogyny: Bill O'Reilly's alleged record of sexual harassment isn't shocking; hating women is central to his brand

For men like Bill O'Reilly, Roger Ailes and Donald Trump, disgusting behavior toward women is part of the package 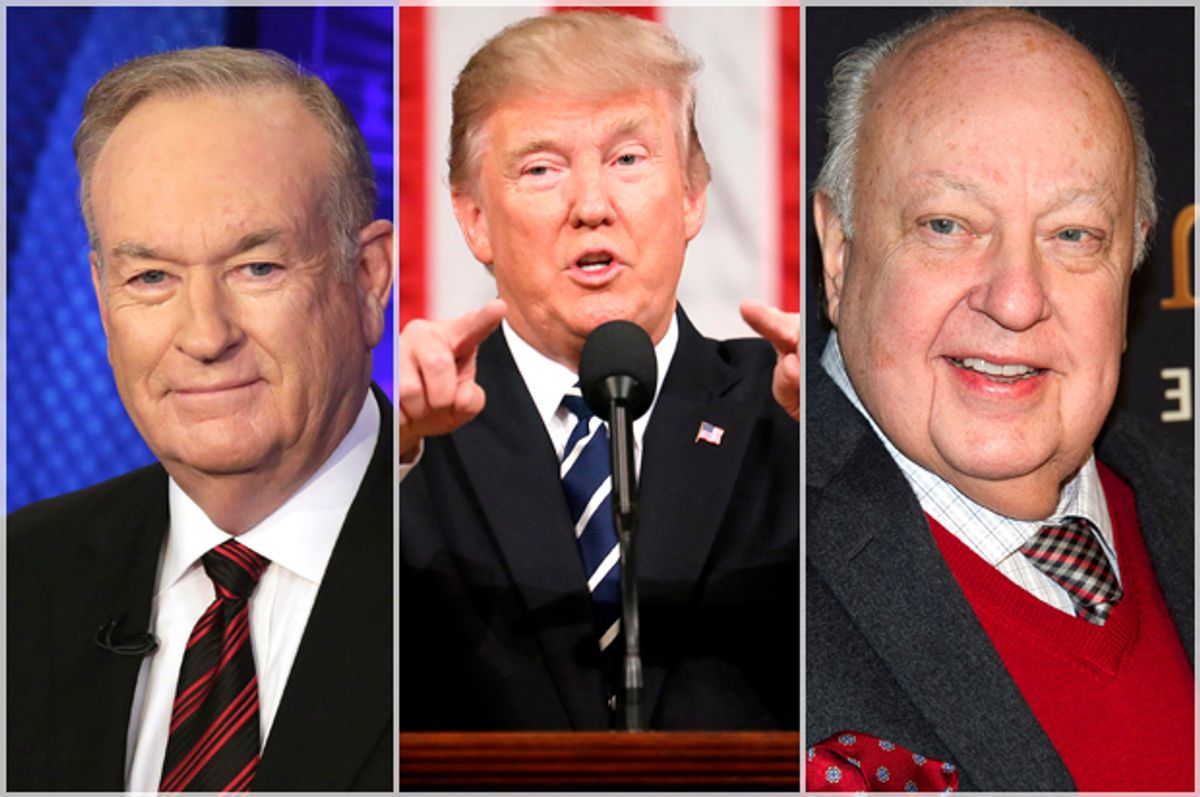 On Saturday, Emily Steel and Michael Schmidt of The New York Times revealed that Fox News has paid at least $13 million in legal settlements to five women who have accused Bill O'Reilly of sexually harassing them. This news comes after two other blockbuster stories about right-wing figureheads — Roger Ailes, the now former head of Fox News, and Donald Trump, our (ugh) president — who were each accused by more than a dozen women of sexual harassment and even assault. Trump, of course, infamously bragged about how he likes to "grab them by the pussy" in a hot-mic tape from "Access Hollywood" that was leaked to the press.

It's customary to talk about these revelations as if they expose some kind of embarrassing flaw. That narrative is hard to maintain when there's no real evidence that the Fox News audience or the voters who put Trump in the White House care about any of this. It's time to consider the possibility that conservatives do not see sexual harassment as a blemish or foible but as an integral part of the brand of overbearing masculinity that men like Ailes, O'Reilly and Trump are selling.

To use the clichéd expression, sexual harassment is a feature of right-wing life not a bug.

The fact that O'Reilly is an enormous misogynist is hardly some shocking discovery. In 2004  the Smoking Gun published the text of a sexual harassment complaint against O'Reilly filed by Andrea Mackris, who was then an associate producer at Fox News. Elements of that lawsuit, which was settled in 2004 for $9 million, became part of pop culture trivia, thanks largely to the recording of O'Reilly trying to entice Mackris into having phone sex by saying he would rub her down with a "falafel," which was apparently the word his lust-addled mind latched onto when he was looking for "loofah."

Despite the humiliating tapes and the very public lawsuit, O'Reilly's audience members didn't turn on him. They didn't turn on him years later when a trickle of news stories emerged that detailed his ceaseless and abusive vendetta against his ex-wife, a woman who was more than entitled to walk out on him after that "falafel" tape. In the years since they separated in 2010, O'Reilly has sued her for millions of dollars, tried to get her boyfriend fired from his job, appears to have leaned on the Roman Catholic Church to deny her Communion, and sued for custody and control of their kids, even though they wanted to live with their mother. During the custody lawsuit, O'Reilly's daughter testified that she had seen O'Reilly choke her mother and drag her down the stairs.

O'Reilly's alleged off-camera mistreatment of women, in truth, doesn't really conflict with the on-air personality he presents to his audience. On-air O'Reilly is a belligerent creep who clearly thinks of women as subhuman objects to be controlled and dominated. In just the past month, he has been called out for his over-the-top sexism aimed at NBC's Andrea Mitchell and Rep. Maxine Waters. He's publicly argued that women aren't really fit to be president and that feminists should not be allowed to report on Trump. He routinely dismisses sexism as a thing women make up to gain some kind of unfair advantage. His show veers wildly between using T&A images and O'Reilly's obsessive desire to punish women for having sex by denying them birth control coverage or abortion.

Hating women isn't incidental to O'Reilly's brand. It's clearly a huge part of what his audience tunes in to see. No wonder Fox News treats sexual harassment payouts as a standard operating expense. Being awful to women is central to its business model.

Over the weekend, Jill Filipovic of The New York Times made a similar point about the all-male photo ops that keep coming out of the Trump White House, and the George W. Bush White House before this. All-male photos of politicians meeting to dismantle abortion access, deny contraception coverage or remove maternity care from insurance coverage aren't gaffes, as outside observers often understand them to be, Filipovic argued. Instead, they are signals to the conservative Republican base that GOP politicians are making good on "the implicit pledge to return white men to their place of historic supremacy."

Sure, conservatives like O'Reilly, Trump and Ailes reliably bristle when they are called "sexist," but that's not because they are striving to be egalitarian and feel hurt that people think they miss the mark. It's more because they reject the assumption that there's anything wrong with their demeaning views of women. They want to carry on treating women like garbage without facing any blowback for it. Their success shows that conservative voters are in complete agreement with that view.