Bernie is wrong and Malcolm was right: What white liberals so often get wrong about racism and Donald Trump

White progressives have a tough time confronting racism — as Bernie Sanders, a hero in many ways, has made clear 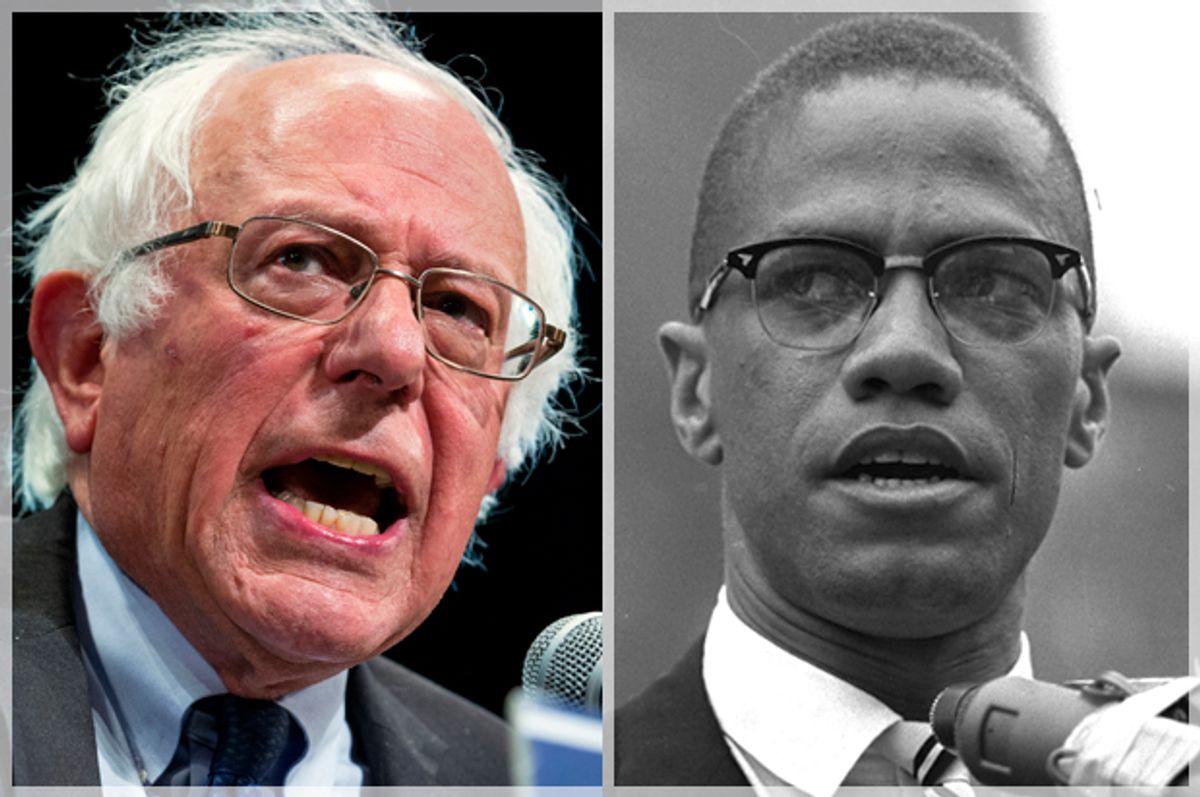 In the United States, white liberals and progressives have historically shown a serious inability to grapple with the realities of the color line and the enduring power of white supremacy. Many of them are either unable or unwilling to understand that fighting against class inequality does not necessarily remedy the specific harms done to African-Americans and other people of color by white racism.

For example, last Friday Sen. Bernie Sanders spoke in Boston at the Our Revolution Rally, where he said this:

Some people think that the people who voted for Trump are racists and sexists and homophobes and deplorable folks. I don't agree, because I've been there.

Given Sanders' long history of fighting for human rights, his comments are profoundly disappointing. They also demonstrate the blind spot and willful myopia that too many white liberals and progressives have toward white racism in America.

Sanders' defense of Donald Trump's "white working class" voters can be evaluated on empirical grounds. This is not a case of "unknown unknowns."  What do public opinion and other data actually tell us about the 2016 presidential election?

Donald Trump's voters — like Republicans and conservatives on average — are much more likely to hold negative attitudes toward African-Americans and other people of color. Social scientists have consistently demonstrated that a mix of "old-fashioned" white racism, white racial resentment (what is known as "modern racism"), xenophobia, ethnocentrism, sexism and nativism heavily influenced white conservatives and right-leaning independents to vote for Donald Trump.

Trump voters are also more authoritarian than Republicans as a whole. Trump voters possess a fantastical belief that white Americans are "oppressed" and thus somehow victims of racism.

Polling experts such as Cornell Belcher have placed Donald Trump's victory over Hillary Clinton within the broader context of a racist backlash against Barack Obama's presidency among white voters.

And one must also not overlook how Donald Trump's presidential campaign and victory inspired a wave of hate crimes across the United States against Muslims, Latinos, African-Americans, First Nations people, gays and lesbians and those of other marginalized communities. Donald Trump used a megaphone of racism and bigotry to win the 2016 presidential election. His supporters heard those signals loud and clear.

Sanders is also committing another error in reasoning and inference, one that is common among white Americans in the post-civil rights era. Racism and white supremacy are not a function of what is in peoples' hearts, what they tell you about their beliefs or the intentions behind their words or deeds. In reality, racism and white supremacy are a function of outcomes and structures. Moreover, the "nice people" that Sanders is talking about benefit from white privilege and the other unearned advantages that come from being white in America.

Sanders' statement is also a reminder of the incorrect lessons that the Democratic Party is in danger of learning from its 2016 defeat.

Sanders has unintentionally exemplified the way that both white liberals and white conservatives are heavily influenced by the white racial frame. As such, both sides of the ideological divide are desperate to see the best in their fellow white Americans, despite the latter's racist behavior.

This is why "white allies" are often viewed with great suspicion by people of color. Malcolm X discussed this point in 1963:

In this deceitful American game of power politics, the Negroes (i.e., the race problem, the integration and civil rights issues) are nothing but tools, used by one group of whites called Liberals against another group of whites called Conservatives, either to get into power or to remain in power. Among whites here in America, the political teams are no longer divided into Democrats and Republicans. The whites who are now struggling for control of the American political throne are divided into "liberal" and "conservative" camps. The white liberals from both parties cross party lines to work together toward the same goal, and white conservatives from both parties do likewise.