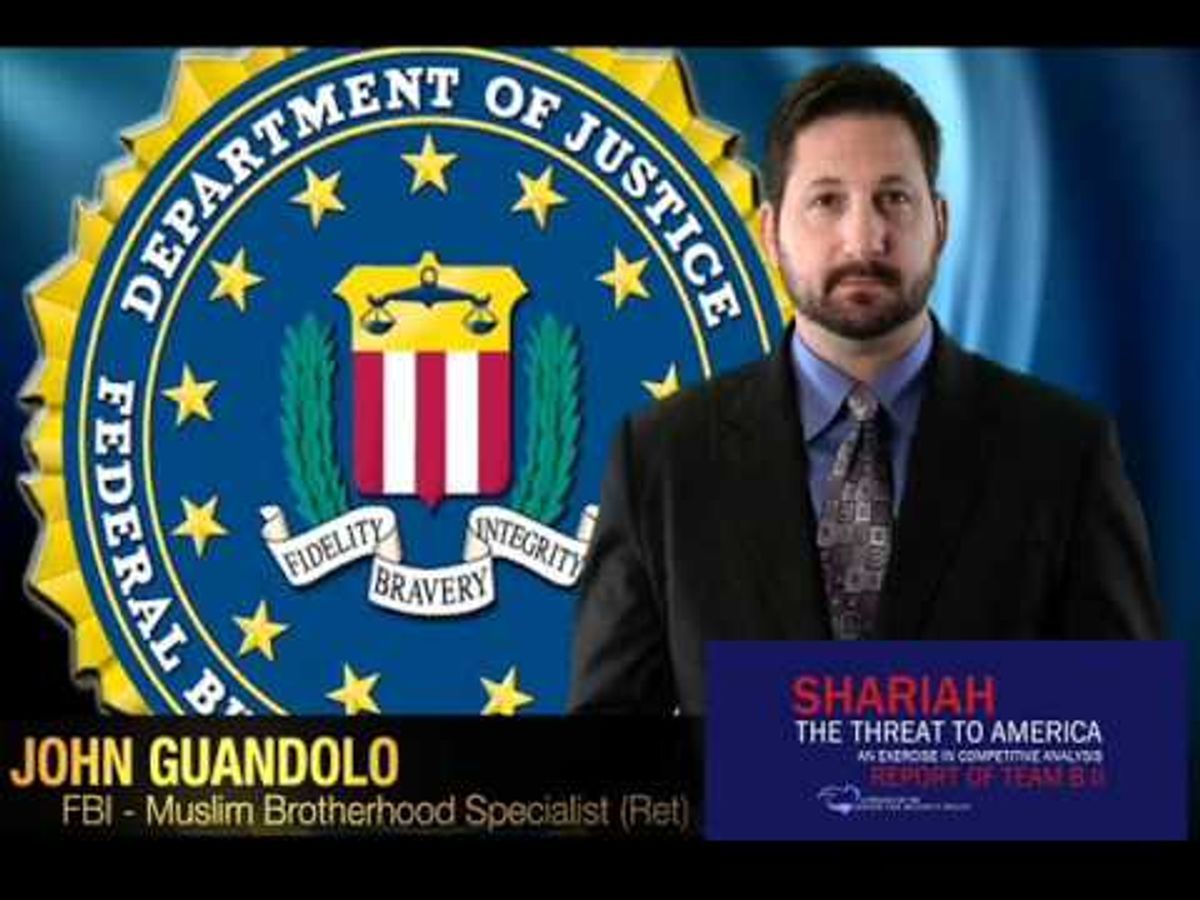 Guandolo, who runs a “strategic and operational training & consulting” group named Understanding the Threat, travels the country ostensibly teaching LEOs at every level of government how to seek out terrorist cells in their area. Guandolo’s trainings instead serve as anti-Muslim witch-hunts, often times targeting and vilifying local Muslim leaders.

Guandolo is using the Mississippi Regional Counterdrug Training Center to conduct his “Understanding and Investigating the Jihadi Threat” training from April 3-5. It is unclear who exactly booked Guandolo, a man who has made a career out of demonizing Muslims and promoting ludicrous Islamophobic conspiracy theories since his hasty exit from the FBI. He recently held a training in Rapides Parish, Louisiana, for a fee of $12,500. The Center for New Community, a civil rights group based in Chicago, keeps a record of Guandolo’s trainings in a report timeline “The Islamophobia Academy.” Guandolo has been quite busy over the past six months, conducting trainings in a number of states including Ohio, Arizona and Texas.

At an event in 2011, Guandolo claimed mosques were fronts for the Muslim Brotherhood, and that mosques in general, “do not have a First Amendment right to do anything.” More recently, in a 2016 radio interview, Guandolo said Americans would soon see “dozens of jihadis doing multiple operations in conjunction with the Marxist and socialist groups like Black Lives Matter, which will be, you know, burning and looting cities like they did in Ferguson [Mo.] and Baltimore.”

Guandolo was dismissed from the FBI for a number of ethical breaches and bizarre conduct which included admitting to having affairs with female FBI agents and a confidential source he was assigned to protect during the corruption case of former U.S. Rep. William Jefferson (D-La.); he also solicited that witness for a $75,000 donation for an anti-terrorism group. Since his departure, Guandolo has devoted himself to a rabid brand of anti-Muslim activism, working closely with some of the most powerful and influential anti-Muslim groups in the U.S. on a flurry of accusations against government officials Guandolo says have ties to terrorist organizations.

In his spare time, Guandolo works closely with ACT! for America, the largest grassroots anti-Muslim group in the country. He helped the group build “The Thin Blue Line Project,” billed as a “one-stop internet resource for information concerning the perceived threat of Muslim infiltration and terrorism in the country.”

Its key component is a “Radicalization Map Locator,” listing the addresses of hundreds of Muslim Student Association (MSA) members around the country as well as a number of mosques and Islamic institutions billed as suspected national security concerns. Just this year, Guandolo told a crowd in South Carolina that the sole purpose of MSAs is to “recruit jihadis”; many in the anti-Muslim movement claim MSAs are a front for the Muslim Brotherhood. In short, the “Thin Blue Line” project identifies targets for law enforcement and government agencies to monitor, a tactic that has gone too far in the past.

In 2012, the Associated Press revealed that the New York Police Department had built an aggressive domestic intelligence program after the Sept. 11 attacks that put Muslim businesses, mosques and student groups under scrutiny, usually without probable cause. The AP documented the NYPD’s systematic effort to spy on Muslim neighborhoods, listen in on sermons, infiltrate colleges and photograph law-abiding residents. Two years later, the NYPD disbanded the unit.

There are others on the anti-Muslim right that Guandolo enjoys close relationships as well, including with Frank Gaffney, head of the anti-Muslim group Center for Security Policy. During the Q&A session at the 2015 Western Conservative Summit in Denver, an attendee asked Gaffney to comment on “Somali colonies” working in meatpacking plants in Colorado. Gaffney responded to the question by stating, “I don’t know about you, but it kind of creeps me out that they are getting jobs in the food supply of the United States.” Earlier in 2015, Gaffney invited Guandolo to speak about radical Islam at a National Security Action Summit in South Carolina. In 2007, CSP awarded Guandolo its “Defenders of the Home Front” award.

His ties go deeper, too. Guandolo has been a guest on an anti-Muslim radio show hosted by Tom Trento, founder of the hate group The United West. During one interview in 2013, Guandolo claimed John Brenan the current director of the CIA, had “interwoven his life professionally and personally with individuals that we know are terrorist and he has given them access” to top officials in the federal government and “brought known Hamas and Muslim Brotherhood leaders into the government and into advisory positions.”

Also in 2013, Guandolo spoke at the Social Contract Press (TSCP) Writers Workshop event in Washington, D.C. on the topic of “The Islamist Threat to Homeland Security.” TSCP was founded by white nationalist John Tanton, the founder of the modern-day anti-immigrant movement. TSCP’s publication, The Social Contract regularly publishes pieces by white nationalists and has called for a ban on all Muslim immigration to the U.S.

Guandolo’s history of anti-Muslim statements and associations with anti-Muslim groups clearly indicates that his trainings on the “threat” of radical Islam are biased, and a number of his previous trainings have been cancelled when his history is pointed out to the agency booking him. Last year for example, the Council of American Islamic Relations (CAIR) took issue with a training he had scheduled in Texas, which was nixed. Guandolo’s response? To call CAIR a “terrorist organization” and liken them to ISIS, writing, “Suit wearing jihadis are no less dangerous than ISIS soldiers on the battlefield.”