Positively Jones Street: How one photograph taken on a New York City street made it iconic 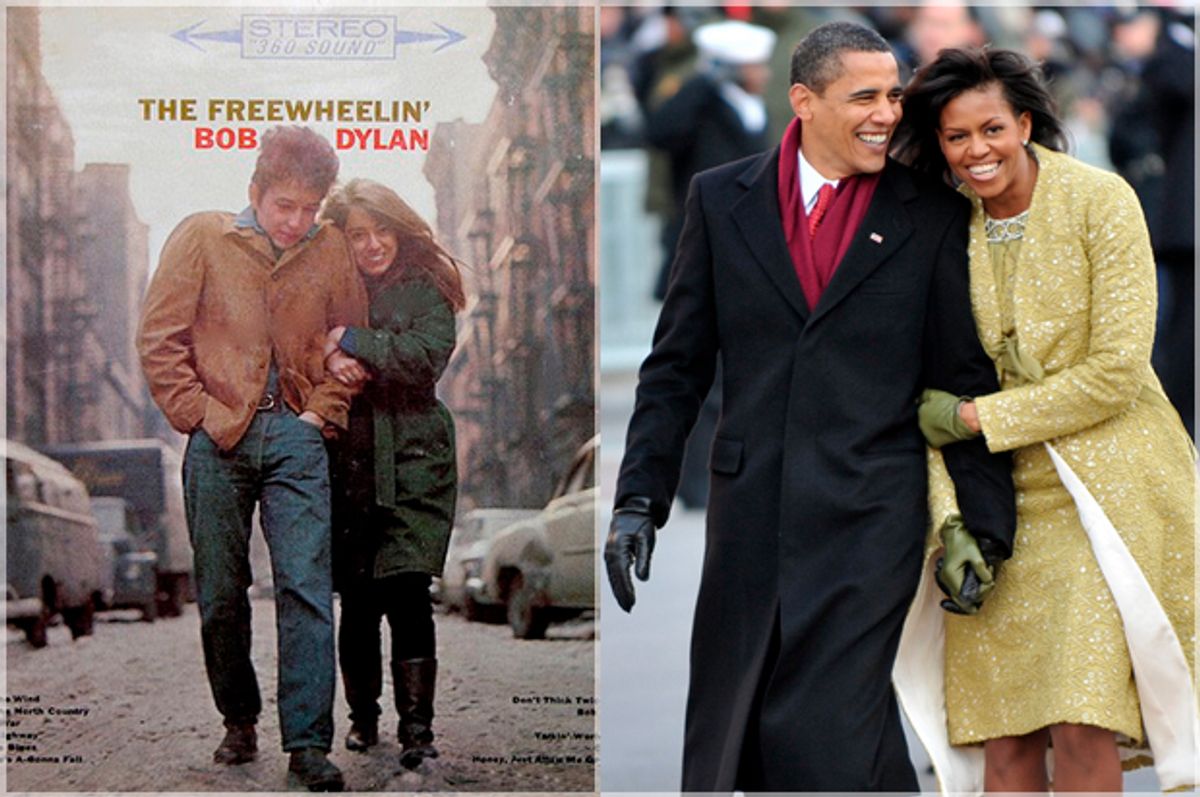 This article originally appeared on goldminemag.com.

No self-respecting Beatles fan visits London without having his or her photo taken crossing Abbey Road. It’s a lifetime moment, putting yourself in the very place the Fab Four were when the posed for the cover photo of their iconic “Abbey Road.” By the same token, no fan of Bob Dylan can visit New York City without asking a friend to stumble up the middle of Jones Street so they can recreate the cover image of another iconic album, “The Freewheelin’ Bob Dylan,” posing in the exact spot where Dylan and his girlfriend Suze Rotolo were captured on a cold winter’s day in 1963. I was reminded of this recently when I heard of the death of Don Hunstein, the photographer who captured that image. Hunstein, who died on March 17 at 88 after battling Alzheimer’s, was the chief staff photographer for Dylan’s label, Columbia Records. He photographed artists from all musical genres for Columbia, from Billie Holiday to Myles Davis to Glenn Gould (who allowed no one but Hunstein to take his photo), but it was his cover image for “The Freewheelin’ Bob Dylan” album that has become his most iconic work.

Just ask John Pita, owner of the Jones Street record shop Record Runner. Pita has been asked so many times about “the spot” that when I called him to ask about the image, he didn’t want to talk. But talk he did. He says Hunstein took the “Freewheelin’” cover image right outside his store. For the 37 years that Pita’s owned Record Runner (and he is not sure what type of store was there when the photo was taken in 1963), both die-hard and casual fans alike are curious enough to interrupt his day-to-day business of selling records to ask the simple question: “Where?”

“People come in here every single day asking me where,” said Pita. “Sometimes I see people outside and they’re in the wrong spot, so I’ve got to tell them where.”

Ironically, Record Runner caters more to ‘80s music fans craving Madonna 12-inch rarities or Duran Duran memorabilia than those looking for a copy of “Freewheelin’ Bob Dylan” (“We have an awful lot of Dylan, too,” Pita scolded me.) And although Pita understands a fan’s obsessive nature, he still can’t quite comprehend the overwhelming and ongoing desire to connect to the “Freewheelin’” spot.

“Even when I have a store full of people, it’s ‘Can you come out here and take my picture?’ But whenever people are very nice, I have no problem doing it for them.” The cultural significance of the Jones Street site goes beyond Dylan die-hards and passing tourists asking for a photo-op. Pita said that the area was recreated for the Showtime series “Californication” a few years back. Scenes were also filmed for the Coen Brothers’ “Inside Llewyn Davis”—a film about a young singer who arrives in Greenwich Village in 1961 to get involved in the area’s burgeoning folk scene. (Sound familiar?)

“In the beginning when we first came here,” Pita explained, “I couldn’t understood why so many people were taking pictures on the street. I kept saying, ‘What’s the big deal about this street? There’s nothing special about it.’ Then I put two and two together.”

Hunstein’s wife, DeeAnne, was excited to hear about Record Runner’s part in the ongoing story of the Freewheelin’ photograph. “I’ve received a lot of testimonials from people I don’t even know about that photo and how it has a particular significance to them,” she wrote in an email. “It’s amazing how people read something about themselves in that photo. When someone put Barack and Michelle Obama, walking down Pennsylvania Avenue after his inauguration on the Freewheelin’ background, I knew what they were trying to say. There was youth setting off into a cold hard world with optimism for the future. It was an homage to that photo.” Former president and Mrs. Obama walking down Pennsylvania Avenue after his inauguration[/caption]

As our conversation wound down, I asked Pita if he thought the cultural phenomenon would ever wind down. Does it have the lasting significance of Abbey Road? Will the curious fans keep showing up, through generations, long after Record Runner is gone?

“I don’t really know,” said Pita. “It’s been written about so many times and throughout so many different eras. And when Dylan recently won the Nobel Prize, we had news people from all over come to this spot. There should be something, like some sort of plaque … something, somewhere here. After all, here’s a guy who is definitely an institution. It’s not just that people like Dylan. There’s a lot of history that goes with him. I mean, I wouldn’t necessarily say in the same class as The Beatles but he certainly represents a certain era, especially a certain era here in the Village. I’m surprised they don’t do more about it because it’s pretty iconic.”

I joked that maybe he should start charging money for his own self-guided tours. “No, I’m not gonna do that.” He paused and laughed a little at the thought. “Although people tell me all the time that I should do a cutout of Dylan that people can go out and take their picture with. In fact, Google did something last year in which they did iconic spots in New York. They asked me if I would put something in the store window for a ‘Google Spot.’

“And then they asked Dylan’s people if it was okay to show that picture. And they said no.”

Patrick Prince is the Editor of Goldmine, where you can read more music enthusiast pieces about great American rockers like Grand Funk Railroad and America.