Before Hillary Clinton encouraged women to run for office this week, they had already started signing up to do so 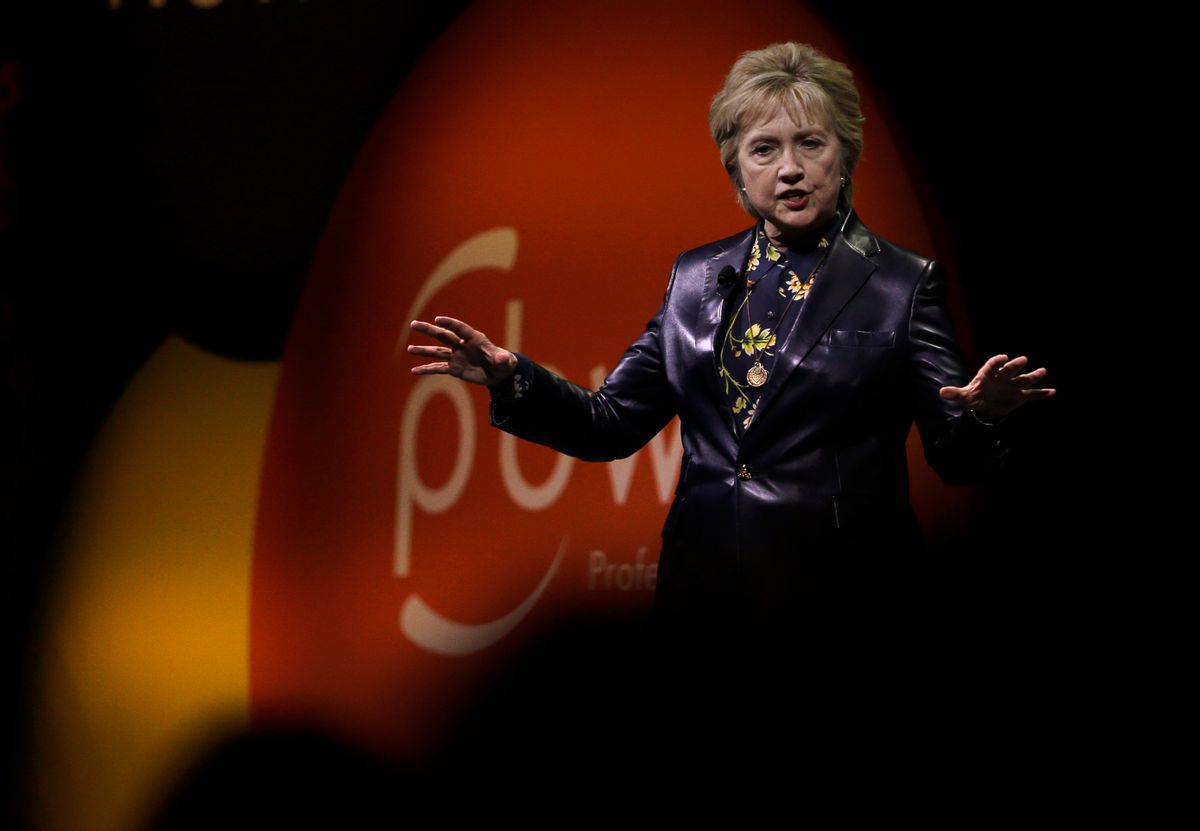 Former Secretary of State Hillary Clinton gestures while speaking before the Professional Businesswomen of California Tuesday, March 28, 2017, in San Francisco. Clinton is in San Francisco for one of her first public speeches since losing the 2016 presidential race. (AP Photo/Ben Margot) (AP)
--

In one of her first public appearances since she lost the presidential election, Hillary Clinton took to the stage at a San Francisco conference for businesswomen on Tuesday, encouraging women to “get in the arena” and run for higher office.

“I am here today to urge us not to grow tired. Not to be discouraged and disappointed. Not to throw up our hands because change is not happening fast enough,” Clinton said. “We need more women at any table, at any conference call or email chain where decisions are made.”

During her campaign, Clinton promised to fill half of her Cabinet with women. On Tuesday, Clinton criticized Trump, whom she did not mention by name, for having so few women in high-level jobs, with just four women holding Cabinet-level positions out of 23.

The New York Times reported earlier this month that Donald Trump’s Cabinet is shaping up to be more white and male than any first Cabinet since Ronald Reagan’s, but in an every-cloud-has-a-silver-lining moment, Trump’s election appears to be galvanizing more women to run for office.

“What we’re seeing is a real interest on the part of women post the 2016 election to be active and engaged citizens and to have a voice,” Deborah Walsh, director of the Center for American Women and Politics at Rutgers University in New Jersey, tells BillMoyers.com.

Earlier this month, the center’s Ready to Run workshop, an annual event for women interested in running for office, had to expand its venue to accommodate a larger audience, with many on a waiting list. That kind of interest is not unique to New Jersey, Walsh says. At partner programs running around the country this Spring Walsh says she’s seen a spike in registrations. “I think there is a very good chance that come 2018, we will see a real increase in the number of women running.”

This enthusiasm is being felt by similar organizations including Emily’s List, which works to advance Democratic women running for office. According to Alexandra De Luca, deputy press secretary at Emily’s List, since Trump’s election more than 10,000 women have contacted her organization expressing an interest in running for local or state office. That number represents an “unprecedented,” tenfold increase compared to the two years leading up to the 2016 election.

De Luca tells BillMoyers.com that the surge in interest is the result of a range of proposed Trump policies that would “turn back the clock on women’s progress.”

“I think that women are seeing now more than ever that the incredibly tangible, powerful way they can fight back is to run for office and that’s why we’re seeing so many women on Nov. 9 that said, ‘What can I do?’” De Luca says.

There’s definitely a lot of ground to make up. Less than a quarter of elected officials nationwide are women, and there was zero growth in terms of the number of women in the U.S. Congress after the 2016 election. While half the nation is made up of women and girls, they are represented by a Congress that is made up of just 20 percent of women.

The United States ranks 104th in the world for women’s representation in government out of a total of 190 countries, according to data compiled by the Inter-Parliamentary Union. That’s down from 52nd in the world just two decades ago.

Seats at the table

Following Clinton’s loss, Walsh says she was concerned that women might be discouraged that the first woman to win a major political party’s presidential nomination came up short. She also feared that women would be so “disgusted and turned off by the tone and the tenor of that campaign” that they would not want to run for office.

It’s a point Clinton herself nodded to on Tuesday night when she empathized with working women who hear sexist comments in their professional lives, which she endured during — and before — her run presidential campaign. “I mean, it’s not like I didn’t know all the nasty things they were saying about me. I thought some of them were kind of creative,” she said. “But you just have to keep going.”

Part of the reason Walsh’s fears were not realized, she says, is because women are seeing that “the stakes are really high and they can’t sit on the sidelines. They need to be in the mix and at the table.”

Vice President Mike Pence inadvertently drove that home last week, after he tweeted a photo of an all-male group of Republican lawmakers discussing women’s health care. In an op-ed in The New York Times earlier this week, writer Jill Filipovic said she believed the photo (and others like it) was not a gaffe, as many political analysts characterized it, but part of a strategy. “Mr. Trump promised he would make America great again, a slogan that included the implicit pledge to return white men to their place of historic supremacy. And that is precisely what these photos show. . . .

“Of course, the reality behind the photo is nearly as disturbing as the image itself. There weren’t many women in that room because the Freedom Caucus appears to be almost entirely male. Women make up less than nine percent of congressional Republicans.”

It’s something the former head of the 4,350-employee Utah Department of Human Services, Lisa Michele Church, a lifelong Republican, can relate to. She recalls her own experience with men making decisions that overwhelmingly affect women.

In 2008, Gov. Jon Huntsman Jr. (R-UT) and his male advisers decided to mandate a 10-hour, four-day workweek for all state employees, with just a few weeks notice given to workers. The few women in Huntsman’s Cabinet, including Church, were not asked to be part of the decision-making process.

Women in leadership roles pleaded with them to move more slowly, knowing that women, most often the ones to arrange for child care and other home issues, needed more time to make alternative arrangements. “They were ignored,” Church says. “I had many valuable female employees leave their jobs because the policy was made without regard to the difficulties it posed for working parents.”

On the flip side, Church says she saw women legislators in Utah advocate for issues such as HPV vaccines and midwifery standards that male legislators were not raising.

It’s not necessarily that men don’t care about such issues; they simply bring a different set of life experiences to public policymaking, which in turn influence their priorities.

“It’s just seeing the world through a different lens,” Walsh says. “It’s why diversity in our elected institutions matter because if we have elected officials, legislators at every level, who reflect the citizens that they represent — if they’re racially and ethnically diverse, if there are more women, and if there are gay and lesbian elected officials — all of those experiences then get reflected in the policies that are made.”

“I don’t want to make it sound like they’re just all sort of a Kumbaya crowd, but they are more likely to be able to work across the party aisle. And sometimes it’s not even on policy but they can build a relationship that can be useful down the road,” Walsh says.

The best example of that, she says, is the monthly dinners held in Washington, D.C., by the women in the U.S. Senate. The senators say these are casual affairs where work isn’t discussed, but by meeting regularly the U.S. Democratic and Republican senators get to know one another better and build bonds.

“In certain moments those personal relationships make a really big difference,” Walsh says. “When the government shut down a couple of years ago, it really was the women in the Senate who were able to forge a bipartisan agreement that ended that government shutdown.”

Whether Republican or Democratic, the thousands of women who are interested in running for office, may be inspired by Clinton’s parting words on Tuesday. She shared a “little mantra” that she’s been saying to herself lately, discovered on long walks in the woods.

“[A]s I think about the outpouring of activism we’re seeing — despite all the noise and the nonsense — four words keep coming back to me: resist, insist, persist, enlist.”