The future of fighting sports concussions could be virtual reality

Researchers in the U.S. and the U.K. are looking at different ways to reduce brain injuries in contact sports 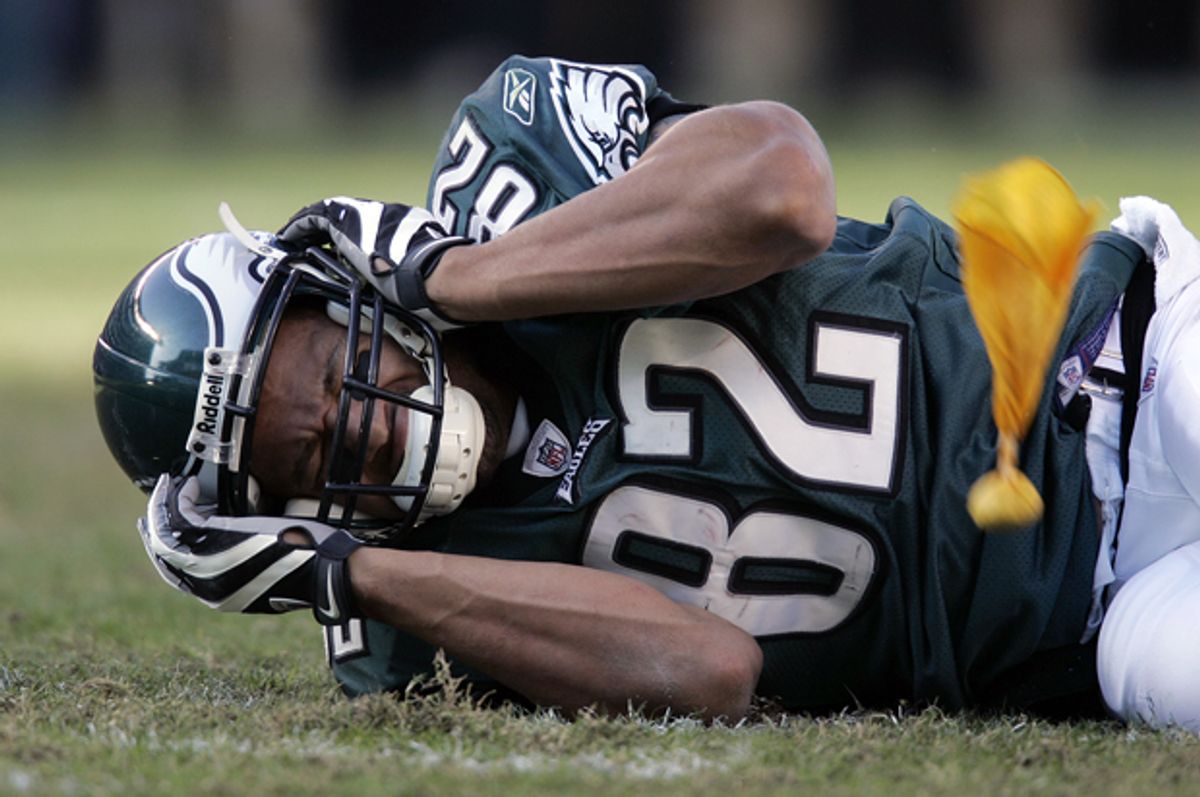 The National Football League kickoff game in September was the first time in nearly 40 years that the same teams who played each other for the previous Super Bowl championship faced off in the first week of the new season. But this historic moment was tarnished by the excessive beating that the Carolina Panthers' star quarterback, Cam Newton, took from the Denver Broncos’ defense.

NFL players face considerable risk of injury, but in this case the on-field behavior of the Broncos’ Brandon Marshall and Darian Stewart was so egregious the players were fined a total of more than $40,000 for excessive strikes to Newton’s head.

Newton later brushed aside the incident by saying, “My job is not to lobby for my health” as debate erupted over whether Newton should have been allowed to continue to play after being visibly shaken by the multiple strikes. The NFL said Newton passed four concussion tests after the game, but these tests can overlook minuscule symptoms.

This year two important studies are taking place that hold promise that someday in the not-too-distant future we could see players on the sidelines wearing virtual reality headsets that would test for injury with much more accuracy.

The first study, being conducted at Indiana University, is focused on using virtual reality to collect eye-movement data from soccer players and competitive divers to gain a greater understanding of how blows — known as subconcussive impacts and sustained when soccer players use their heads to pass a ball or competitive divers hit the water — contribute to brain damage.

“Without knowing the effects of subconcussive head impact, we will never be able to fully understand concussion,” Keisuke Kawata, an assistant professor of kinesiology at Indiana University who orchestrated the study, told Salon by email. “It remains completely unknown whether neuronal damage and sensory deficit are caused by a single concussive blow, repetitive subconcussive impacts before the concussive blow, or both.”

Kawata said his previous research found some college football players had abnormally low eye-movement function before practice and then later sustained concussions. His theory is that there is a relationship between a player having an accumulation of subconcussive impacts and later sustaining a full concussion. Sleep deprivation, a common issue among college players who have to juggle their academic and athletic responsibilities, may also be playing a role.

To do his research, Kawata is using a virtual reality headset called Eye-Sync, which relies on infrared cameras to track eye movement as a user follows a moving circle with his or her eyes. The data that’s collected is then compared to baseline data to measure minuscule aberrations that could be overlooked with conventional tests.

The technology was initially developed by researchers at Stanford University and the Campbell, California-based Brain Trauma Foundation, but the equipment was too big to be of much use on the playing field. Thus Boston-based neurotechnology company SyncThink created Eye-Sync to serve as a portable virtual reality system to be used on the sidelines at sporting events for detecting unusual eye movements in about a minute. New York-based Oculogica is also working on its own patent-pending system, but the EyeSync device gained U.S. Food and Drug Administration approval last year, opening the way for researchers to test it and build a case for leagues and university sports teams to use it.

Meanwhile, across the Atlantic at the University of East Anglia in Norwich, England, a separate research team is using an Oculus Rift VR headset to help determine if a soccer player has sustained a brain injury by testing his or her ability to maintain balance while following instructions. Once the headset is placed, the player sees a virtual room that tilts and inside words flash on a wall to be read. This test challenges a player's ability to maintain balance while following visual cues. This test could be tapped to detect subtle brain impacts and used by team personnel who have to make split decisions about whether a player should be sidelined during a match.

“Very few tests based on physiological response are currently in use,” Michael J. Grey, the head of the study, told Salon by email. “This is an area that can be improved using VR.”

The English Football Association has expressed interest in using the technology if the results of the study show promise, Grey said.

“We cannot even begin to have the conversation with pro-sporting bodies before we show clear efficacy of the technology,” Grey added.

For his part, Kawata said the NFL and college teams are waiting until more research is done on VR-based brain injury tests before taking action.

“Their approach is more like ‘show me the evidence, then I’ll listen,’” he said.