There's no problem with "Get Out" in Trump country; audiences everywhere agree they love it

In divided times a potentially divisive film unifies audiences, even if everybody's getting a different message 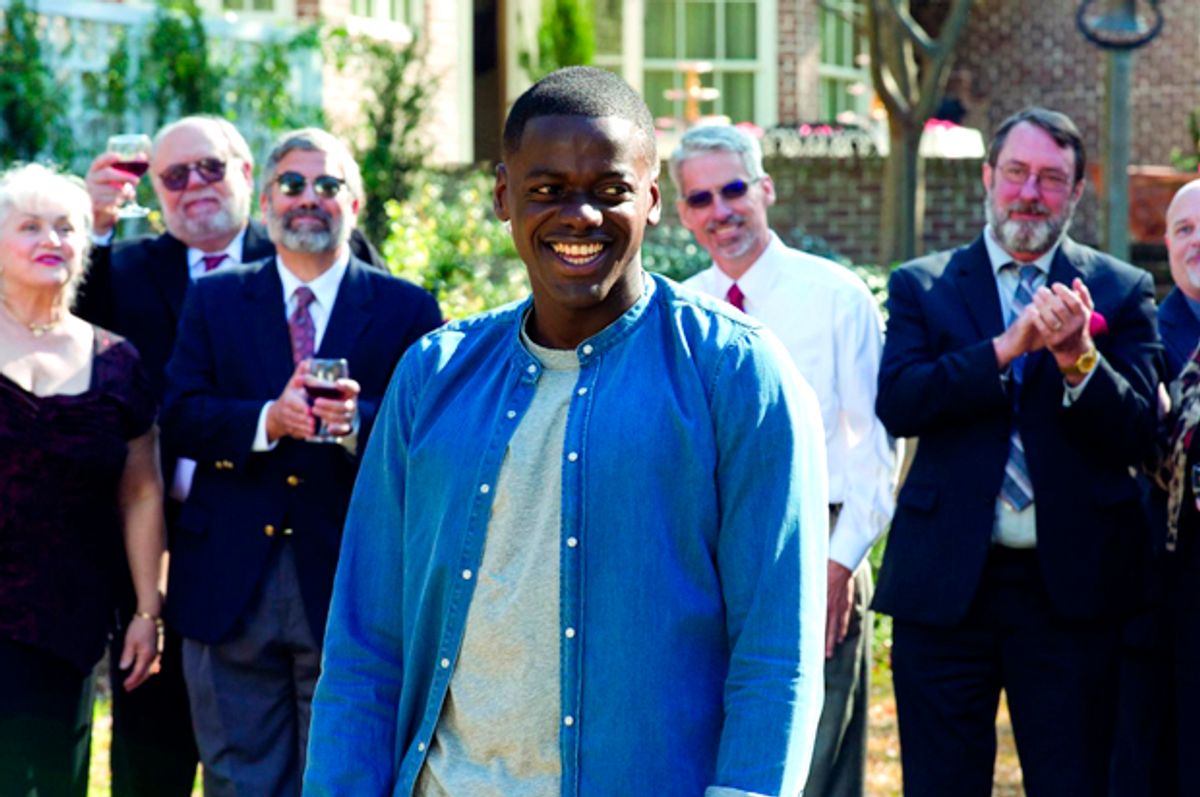 It's tempting to assume that the outrageous box office success — $140 million and counting — of director Jordan Peele’s "Get Out" has been a bicoastal phenomenon, in urban areas where savvy audiences are self-aware and comfortable with the skewering of America's great racial divide. But the tremendously popular horror-comedy, according to an industry analyst, is “overperforming,” in the South. Who would have thought?

And, get this: The movie, about Chris Washington (Daniel Kaluuya), a black man who visits his white girlfriend’s family, only to find himself the prize for a sick cabal of sinister white folks with evil intent, isn't playing significantly better for black audiences over white ones. In two audience polls run by comScore, which tracks box office receipts for the movie industry, white, black and Hispanic audiences each gave the film a similar thumbs up, with well more than two-thirds of each group rating the film favorably. Although it’s true that African-American audiences have tended to give the film more of an “excellent” rating instead of “very good,” the percentages were close. And when it came to age or gender assessments, again, the numbers were all also similarly positive.

This may not be overwhelming evidence, but it certainly suggests that "Get Out" is playing to a wide variety of demographics. And sure, maybe that's just because the movie is so damn good that everyone loves it. It’s funny, well acted, with great scares, and it hangs on a tightly wound screenplay that has audiences laughing or screaming or ultimately roaring in their seats. But still the film's highly charged racial themes must be part of its appeal. And yet, it’s playing well in Trumpland as well as the East where it is also "overperforming," according to the same source. It appears to not be dividing audiences by race, region, gender or age. It may be instructive here to recall that ancient Indian fable of the blind men and the elephant. You know what happens: Each man grabs one part of the animal’s body — a tusk, a leg, a tail, the trunk, an ear, the torso — and so each one believes that the animal is something completely different. Put "Get Out" in the place of the elephant, and replace the blind men with a pussy-hat-wearing liberal Boston Brahmin, an African-American teenager and a Trump-voter with a “Build the Wall” bumper sticker on his truck, and you have to wonder: "Are they seeing the same thing up on that screen?"

Consider, for instance, these two headlines, the first from The New York Post, the second from NPR:

Liberalism gets a gleeful slashing in “Get Out.”

In 'Get Out,'Jordan Peele Tackles The 'Human Horror' Of Racial Fear

Or, more to the point, check out the different monsters that appear in these headlines from Breitbart and Vanity Fair, respectively:

In Jordan Peele’s Gripping Get Out, “Humanity Is the Monster”

This see-what-you-want-to-see split in the media is, at least partly, by design. Peele told audiences at the film’s Sundance premiere: “It was very important to me for this not to be about a black guy going to the South and going to this red state where the presumption for a lot of people is everybody’s racist there. This was meant to take a stab at the liberal elite that tends to believe that ‘We’re above these things.'”

The bad guys in the film include a white woman who dates black men and a man who would have voted for Obama three times if he could have. This allows thinly veiled racists to feel comfortable with the film because they don’t identify with the villains. And liberals can also not feel targeted because they are enlightened enough to laugh at themselves and they get the irony of an Obama voter also being a bat-shit crazy racist monster.

Brilliantly (and conveniently), Peele’s creative and political intention manages to lead to across-the-board audience appeal and therefore boffo box office. (It’s hard to say how straight-up white supremacists are receiving the film but one would imagine that if they are watching it, "Get Out" emboldens their hopes for all-out racial war.)

At Rotten Tomatoes, the film has received universally positive reviews, not counting one from the National Review’s Armond White, who is known for his ridiculously, contrarian views. In his review, which is titled “Return of the get-whitey movie,” White is accurate in identifying the irony that the film's revenge humor is “tailored to please the liberal status-quo,” but he also calls "Get Out" a “state-of-the-divided-nation movie.” The further irony here is that the film, in fact, is actually bringing people together. They’re stepping out of their silos to watch the same film because it’s a gut-splitting affirmation that the nation is freaked out about race. We're all laughing at the same thing — if for different reasons.