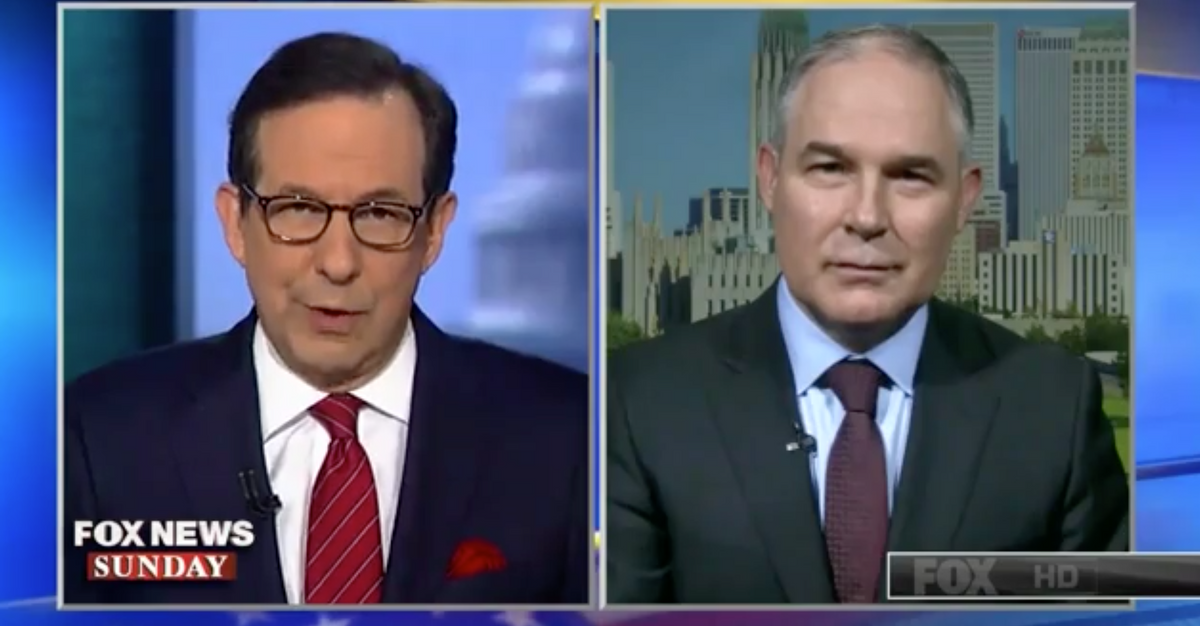 Days after President Donald Trump signed an executive order to start the process of revisiting the Clean Power Plan, put in place by former President Barack Obama, Trump's new EPA administrator, Scott Pruitt, didn't quite receive the warm welcome he may have been expecting. Instead, host Chris Wallace of "Fox News Sunday" challenged him with questions on federal regulations and Trump's budget proposals:

“You think that rewriting and, in fact, doing away with the Clean Power Plan is going to improve air quality, which you say is a major goal?” Wallace asked.

Wallace pointed out the many benefits of the Obama-era Clean Power Plan, which if all were to go according according to the proposal, would help prevent about 90,000 fewer asthma attacks and save 3,600 premature deaths a year by 2030. When asked what he will do to continue to prevent "those terrible things," Pruitt dodged the question by responding with campaign-like rhetoric.

"Well, Chris, I think what's important this past week is to recognize that the president is keeping his promise to the American people, to roll back regulatory overreach that has been occurring the last several years," Pruitt answered.

Wallace, unsatisfied with Pruitt's response, pressed him a bit further: "You talk about regulatory overreach, but the question is, there are 166 million people living in unclear air, and you're going to remove some of the pollution restrictions, which will make the air even worse."

Then Wallace harped on Pruitt's remarks from last month, when he confidently stated that carbon dioxide emissions are not a primary contributor to climate change.

"Mr. Pruitt, there are all kinds of studies that contradict you,” Wallace said. “The U.N. panel on climate change says it’s 95 percent likely that at least half of the temperature increase since the mid-20th century is due to human activities."

Pruitt — who as the state attorney general of Oklahoma sued the EPA multiple times — spoke about how his agency should not possess the authority to regulate greenhouse gases. He added that he believes that "we’ve done better than anybody in the world at burning coal cleanly.”

To close out the interview, Wallace raised the prospect of Trump's budget proposal, which would slash the EPA's budget 31 percent.

Pruitt said there has been a "lack of commitment to state partnership." He added that he rejects the notion that "people in Texas, Oklahoma, Kansas and Colorado and the rest of the country don't care about the water they drink or the air they breathe," which, according to him, is exclusively a D.C. narrative.