Klepper marks a safe choice for the comedy network 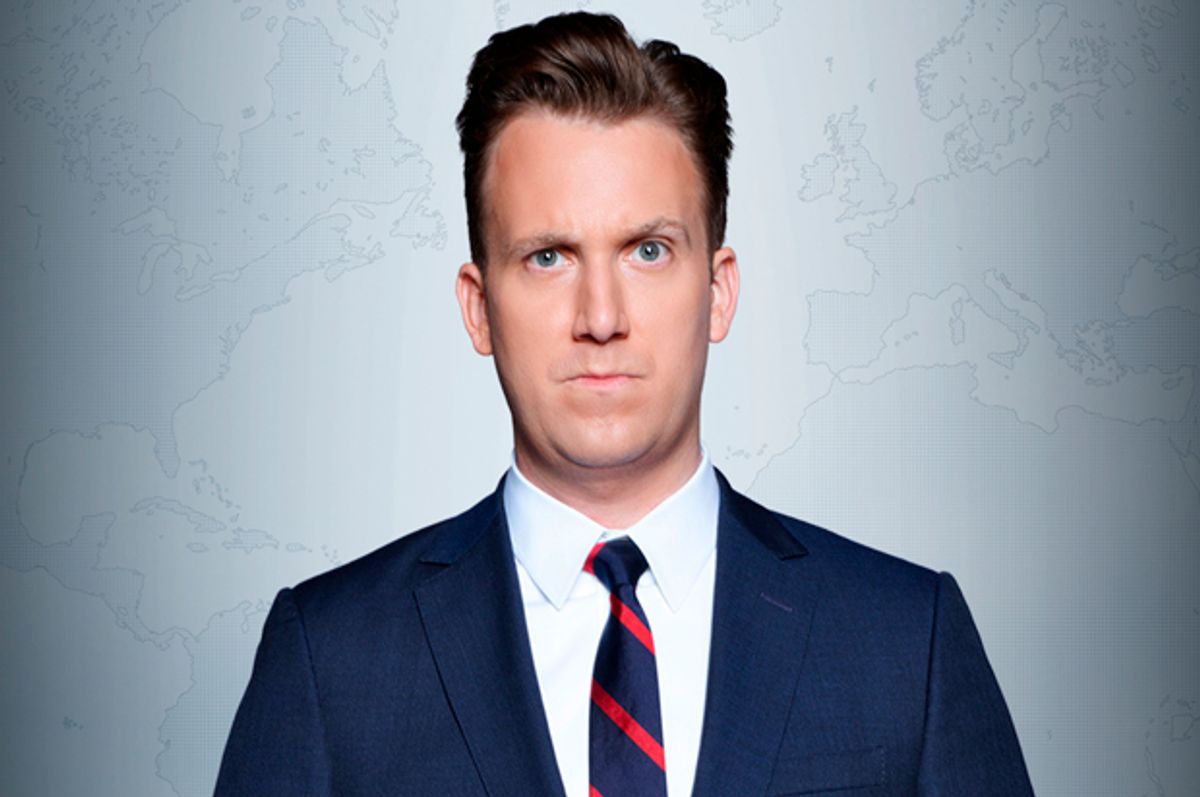 When Trevor Noah had an emergency appendectomy in October,“The Daily Show" tapped goofy blowhard correspondent Jordan Klepper to fill in for Noah, in what the show jokingly framed as a hostile takeover — a joke that played off of Donald Trump’s refusal to guarantee that he would advocate for a peaceful transfer of power if he lost to Hillary Clinton. After joking that Noah was suffering from penis farting syndrome, Klepper grew self-aware. “While we’re on the subject of a white guy trying to fill a black man’s job, let’s talk about Donald Trump,” he said.

It was a small joke but one that illustrates Klepper’s position on the show. He is tall and white; he winkingly plays the part of the obnoxious and unaware Caucasian of privilege. In some of his best segments as a correspondent, he has laughed along with Trump supporters’ riled ignorance and has played foil to diverse castmates as they discuss how to talk about race or policing. The October episode that Klepper hosted was a strong one; Klepper filled in without missing a beat.

Despite the show’s framing, the reason Klepper was chosen to host the episode probably had more to do with seniority than privilege. Klepper joined the show in March 2014, while Jon Stewart was still hosting, making him the longest-tenured current cast member outside of Lewis Black.

So perhaps it should not be a surprise that Comedy Central announced today that it chose Klepper to host a show in the network’s 11:30 p.m. time slot — the slot formerly occupied by Stephen Colbert’s “The Colbert Report” and then Larry Wilmore’s “The Nightly Show” — come autumn. (Chris Hardwick’s “@Midnight” has been filling the slot on an interim basis.)

Klepper’s show doesn’t have a name or a premise. The network has said, though, that it will “embrace and define the chaos of our country by channeling Klepper’s steadfast attitude that institutions are to be trusted less than the lies of the mainstream media.”

Besides Klepper’s tenure and demonstrated (albeit in a limited sample) aptitude for hosting, it’s easy to see why the network chose Klepper: He has a quick wit, a quirky Archer-like inflection, a sardonic style, and he looks the part of ​the late-night show host of yore. With his symmetrical, youthlike features, his light skin and his slim, lofty build, he could pass for a relative of Jake Tapper.

And yet, it is for those reasons that Klepper also seems like an uninspired choice.

When Stewart's and Colbert’s shows ended, Comedy Central steered forward with new perspectives guiding their late-night sails. Noah would bring youthful energy, tech savvy and, as a foreigner, a view of America that looked in from the outside. And Wilmore, a widely renowned comedy vet, who had played the "senior black correspondent" on Stewart’s “Daily Show,” would be allowed to discuss race head-on, an anomaly on television.

Things haven't gone quite as planned. While the two shows have experienced different fates — Wilmore’s was canceled, Noah’s was not — neither has resonated in the way the network had hoped. On the whole, the ratings of both shows have paled in comparison to their predecessors’. The problem has been that “The Nightly Show” didn’t feel like essential viewing and “The Daily Show” does not. When crazy happens, it’s John Oliver’s nuance and Samantha Bee’s feminist fury that feel integral for liberal processing.

Of course, the lack of resonance is not due to the hosts’ race but to the shows’ failure at being surgically sharp. Noah’s perspective and targets simply aren’t as clear or refined as Stewart’s were.

It’s unclear, though, which lesson Comedy Central has taken away from its post-Stewart-and-Colbert late-night slate — that new perspectives don’t work or that only strong perspectives do work. Klepper is as funny as any correspondent on the show but not more funny. It’s hard not to wonder why Roy Wood Jr., Hasan Minaj, Alvin Chieng or the recently departed Jessica Williams were not given the keys to 11:30 p.m. Each would have offered a new perspective — different from Stewart’s, Colbert’s, Wilmore’s or Noah’s — and a strong point of view.

Klepper may very well excel and help to right Comedy Central’s tottering late-night ship. But superficially, he seems like a reversion to what has been tried and tested.

In the middle segment of the episode that Klepper hosted, the correspondents Roy Wood Jr., Ronny Chieng and Desi Lydic pretended to have been, respectively, beaten, hog-tied and sabotaged by Klepper in his effort to host the show. Like Trump, he was a white man who would do anything to reign supreme. It was satire, of course. But when the reality you take part in propagating parallels the one you were lampooning, it loses its edge.