"Sesame Street" is on HBO, says someone who has no idea how the world works 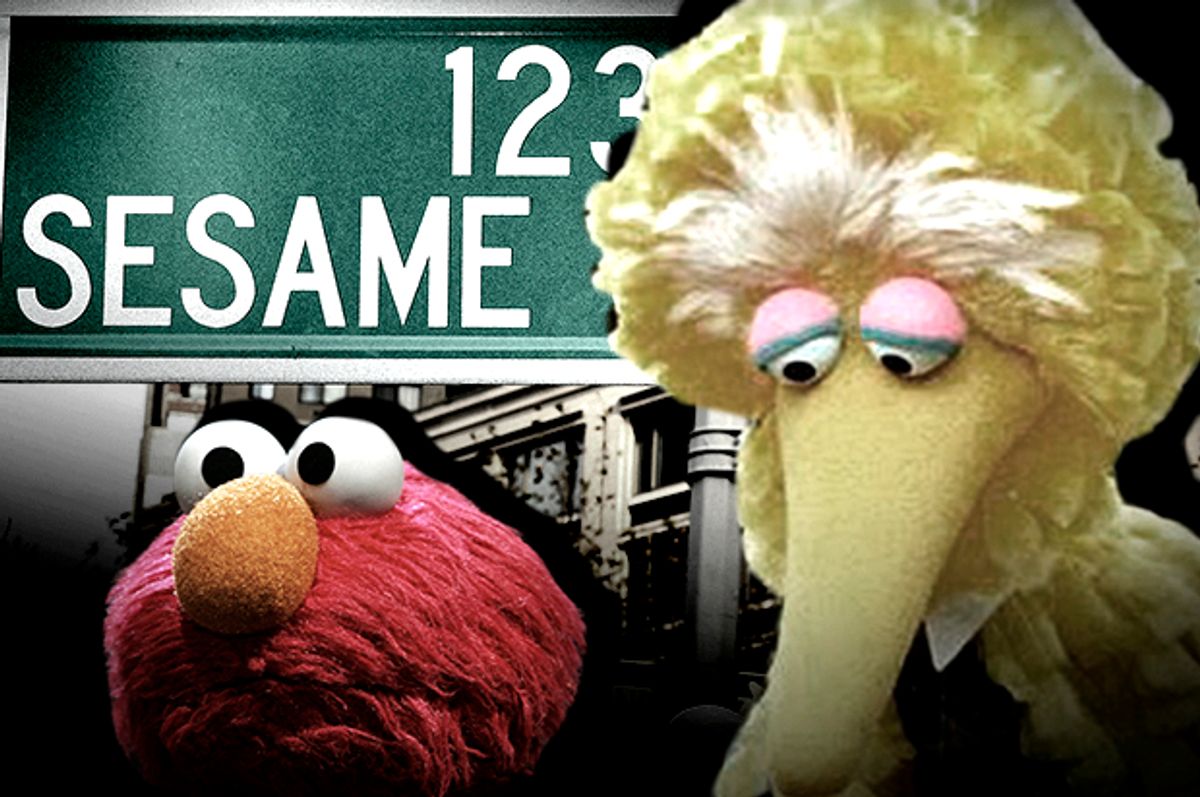 "Sesame Street," the iconic television show geared toward preschoolers, was conceived in the late 1960s as a way to teach children through television.

For more than 40 years, "Sesame Street" has worked to help young children learn how to read, become social beings and live healthier lifestyles. In its first year, it surpassed its initial goal to promote math literacy by helping 2-year-olds count to 20. After a decade on air, "Sesame Street" was reaching 9 million American kids under 6 years old each day. As Newsweek noted in 2009, "Perhaps the most radical part of the Sesame DNA has always been its social activism. From the start, Sesame targeted lower-income, urban kids — the ones who lived on streets with garbage cans sitting in front of their rowhouse apartments."

But according to her op-ed in Louisville's daily newspaper, the Courier-Journal, conservative Kentucky blogger Bridget Bush thinks this TV show that poor kids can actually relate to is an "elitist, anti-capitalist" venture.

Nightmare on Elm Street is not a film one associates with public broadcasting and as best I am aware, it has never aired on that august network. Yet its villain, Freddy Krueger, is an apt mascot for the Corporation for Public Broadcasting (CPB): Both survive despite repeated attempts to kill them.

Freddy Krueger tried to kill people — kinda like the Republicans' health care bill, actually — while "Sesame Street" only tries to have kids to count to 100. By tens, no less! Though Bush doesn't have to go far to say that only one party — that of the Republicans — are the ones who have been trying to do the killing in this scenario. Since they've failed so far, maybe Big Bird isn't the villain from the "Nightmare on Elm Street" series, but rather one of the good guys from "Star Wars" who keeps avoiding the inept storm troopers' shots? Bush continued:

It’s true that PBS has broadcast some wonderful programs over the years. I grew up watching Zoom and Masterpiece Theater. More recently, I watched every episode of Downton Abbey.

That's great! And the fact that no one in his or her right mind would make "Masterpiece Theater" on commercial television basically means that we've established that PBS is important. And since a certain classic movie network — available on cable television only, by the way — is no longer airing actual classic movies, I'd say that Bush proved her point that the Corporation for Public Broadcasting shouldn't be on the chopping block. So let's get to watching some "Downton Abbey" and — Bush:

When PBS was established in the late 1960’s, the public was generally limited to the three major networks. PBS added a fourth choice. Because these networks were broadcast over a finite spectrum, we could not have the hundreds of channels that cable offers.

PBS was intended to provide programming that could not be found elsewhere. With so many avenues to air content today, it is inconceivable that some other network or channel would have failed to pick up a show like Downton Abbey; it would have been shown with or without PBS. Just as HBO now airs Sesame Street. Netflix likewise has tapped into the love for Downton Abbey by producing original series such as The Crown.

This is your choice, poor people. The Corporation for Public Broadcasting, which, according to NPR, costs each American citizen $1.35 a year, needs to go. But that's OK, because you can spend $10 or so a month on Netflix, plus high-speed internet — that's if you're even able to receive high-speed internet in your area — or pay for a cable TV package, plus HBO, each month. Bush observed:

Fifty years ago, it made sense for the government to subsidize radio and television stations for rural areas that would otherwise not have a station. Now those customers are moving online to download content. Even remote areas are finally getting high-speed internet service, which will lead to more educational and entertainment options than public broadcasting ever could provide. That’s a better use of federal tax dollars than funding the CPB.

They still need to be able to afford high-speed internet service. Yet Bush persisted:

Some will argue that poor people cannot afford cable or the internet and their children will be disadvantaged if they cannot watch PBS.

Sometimes, the danger of having an argument and publishing it online is that the straw man you build up is actually better than the actual argument. That's what happened here to poor Bridget Bush, some may argue:

Although Sesame Street teaches pre-school skills, so do many books available for free at the library. There are a lot of things that poor people cannot afford. That’s why we need economic policies to allow people who want to work hard to escape poverty — not policies to make poverty more comfortable.

For preschool-aged kids who can't read and who might not have anyone at home reading to them, "go to the library" doesn't make much sense, does it? The library route also doesn't really work with Bush's logic, considering that "most public library revenue typically comes from local government sources," according to the Institute of Museum and Library Sciences. So in many cases we're just shifting funding from the federal government to poor, rural governments. Good luck with that, guys!

If the goal is to make poverty less comfortable, maybe we should reinstitute public flogging for anyone who can't afford cable. Bush argued:

So far, we've been given three reasons why public broadcasting is important, straight from the author's mouth:

1. PBS was intended to provide programming that could not be found elsewhere.

2. Poor people cannot afford cable or the internet and their children will be disadvantaged if they cannot watch PBS.

3. The federal government spends "a pittance" on it.

And yet, Bush added:

Those who don’t mind paying a portion of their taxes to the CPB can donate to it. Hopefully, upcoming tax cuts will free up money for all of us to make donations wherever we see fit. Or buy more polo shirts and take more cruises to fund the CPB the American way: through advertising.

Yeah, donate your $1.50 to something else more worthwhile! And be less poor, while you're at it! Thank you, Bridget Bush, and I am most certainly going to read next your column, "Why march? U.S. women have it good."