China's game in North Korea: What does China have to gain by keeping the status quo?

Isn’t China fearful of having a rogue nuclear state on its border? 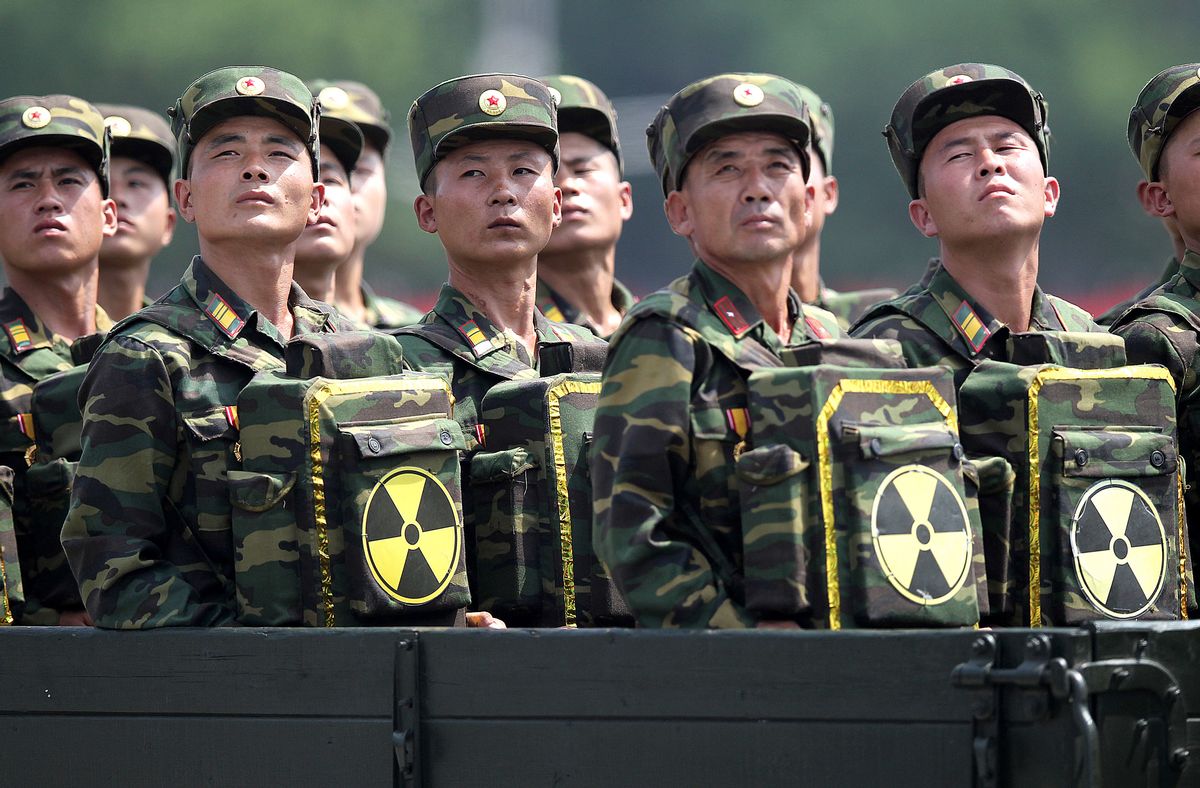 But China would like to use North Korea to weaken the U.S./South Korea alliance and undermine the U.S.’ position in Asia.

North Korea is a very curious case. During the Cold War period, it was not very different from other communist countries. It had a centrally planned economy which seemed to work well for a while, before its inherent inefficiencies eventually became evident.

It was only in the 1970s that it fell behind South Korea in terms of GDP per capita. Like many other communist states, North Korea received support from the Soviet Union.

Being “a shrimp among whales,” surrounded by the giants of the Soviet Union and China, and enemies like South Korea, Japan, and the United States with its military bases in these latter two countries, national security was always North Korea’s top national priority.

It reportedly began acquiring nuclear technology from the 1980s with lots of help from friends like Pakistan, China and the Soviet Union.

The end of the Cold War and the 1990s was a major turning point in North Korea’s modern history.

It suffered greatly from the loss of financial support from the Soviet Union, natural disasters and economic mismanagement which led to a massive famine with over 300,000 people dying (it did however benefit from out-of-work Russian rocket scientists who sought work in North Korea).

This period is known as the “Arduous March.” And then Kim Il-sung, the founding father of North Korea, died in 1994, and was succeeded by his eccentric and fun-loving son, Kim Jong-il.

The Kim dictatorship was spooked by the democratisation and adoption of market economics in Russia, and Soviet satellites in Central and Eastern Europe and Mongolia.

The reunification of East and West Germany also exacerbated North Korea’s fear of a United States desire to reunify North and South Korea.

The lesson that North Korea drew from the end of the Cold War was that rather transforming into a market economy and democracy, it should double down on efforts for regime survival.

So it invested heavily in its military capabilities both to act as deterrent to potential aggressors and to extract economic concessions from the U.S., Japan and South Korea.

North Korea also maintained firm control over the economy (the self reliance or “juche” philosophy), in contrast to China’s market opening.

The U.S. interventions in Iraq, Afghanistan and Libya only confirmed the vulnerabilities that the Kim regime felt, and vindicated its policy of building up nuclear weapons.

Over the past two decades or so North Korea has been playing a cat and mouse with the international community over its development of ballistic missiles and nuclear weapons.

Following each nuclear test or missile launch, the United Nations Security Council declares its condemnations, and imposes trade and financial sanctions on North Korea, but nothing changes.

“Six party talks” involving North Korea, South Korea, China, Japan, U.S. and Russia, were held from 2003 to 2009. But North Korea sabotaged and walked away from these diplomatic efforts to bring a halt to North Korea’s development of nuclear weapons.

North Korea’s rogue activities only took a turn for the worse with the ascension of Kim Jong-un to North Korea’s leadership, following the death of his father, Kim Jong-il, in 2011.

The new thirty-something year old dictator, with no direct military or governmental experience, has had to consolidate and assert his leadership, to win the necessary loyalty of the military.

This has meant eliminating all possible rivals, including his uncle and most recently his half brother, Kim Jong-nam, as well as accelerating his missile and nuclear programme.

North Korea’s first nuclear weapons test was in 2006. Kim Jong-un conducted two nuclear tests and more than 20 ballistic tests in 2016 alone. And already, he has greeted Donald Trump with two missile launches in 2017.

North Korea is widely perceived to be the greatest threat to security, stability and peace in Asia and the rest of the world. Today North Korea could attack South Korea, Japan, and even United States bases in Guam with nuclear and other missiles.

The power that China holds

And with the rapid progress that North Korea is making, it is just a matter of a few years before it could even reach mainland U.S. with a nuclear intercontinental ballistic missile.

What is the solution to North Korea’s rogue activities? According to conventional wisdom, the answer lies in China, North Korea’s principal benefactor. Some 90% of North Korea’s trade is with China, which is also responsible for the lion’s share of its foreign investment.

China also hosts thousands of North Korean workers, most of whose wages goes back to the North Korean regime. North Korea is highly dependent on Chinese aid, especially for food and energy.

Surely China could just cut its umbilical cord with Korea, and save the U.S., South Korea, Japan and the rest of us from this horrific regime. But there is no evidence of any willingness of China to tackle North Korea seriously, even if it has become greatly irritated by North Korea’s behaviour until Kim Jong-un.

At the UN Security Council, China always pushes for moderation and loopholes in sanctions on North Korea. China routinely condemns North Korea’s actions, and urges it to comply with UN resolutions. But it has never implemented U.S. sanctions seriously.

The Chinese have allowed North Korean state-owned enterprises to operate in China. They very often buy materials and goods from Chinese and international companies, and then export them to North Korea.

Then there are Chinese enterprises like the Dandong Hongxiang Development Company which been helping North Korea procure raw materials for nuclear weapons. And Chinese banks reportedly hold some of the Kim family assets.

China is of course not the only friend of North Korea. The Pakistan Energy Commission has been reportedly selling nuclear materials to North Korea, some of which they have initially bought from China. And the recent murder of Kim Jong-nam has highlighted the close links between Malaysia and North Korea

What explains this Chinese collusion with and protection of North Korea? Isn’t China fearful of having a rogue nuclear state on its border?

China may be unhappy with North Korea’s nuclear programme, but this pales into insignificance to the risks of a collapsed North Korea.

The last thing that China wants is a failed nuclear state on its border, with the prospect of millions of poor refugees flooding into the country.

Nor does China want a regime change that would see the U.S. and China battling for control of the Korean peninsular.

It is also fearful that regime change could result in a reunification of North and South Korea, with the new state aligned with the U.S., and American troops sitting directly on its border.

The Chinese see North Korea as a critical protective buffer for them. So although it objects to North Korea’s nuclear and missile programme, China wants the status quo.

America’s frustrations with North Korea are now palpable as it fears that it and its South Korean and Japanese allies could become victims of a nuclear missile attack. For its part, North Korea sees the U.S. and U.S.-supported South Korea as being the principal threats to its security.

And while China sits in the middle of this puzzle, it argues that the North Korean problem is an issue between North Korea and the United States, and does not involve China.

The United States is pushing for much tighter sanctions, and the serious implementation of these sanctions, including punishing Chinese companies and banks that collaborate with North Korea.

But experience shows that sanctions haven’t worked, as North Korea will always find ways around them, and many countries do not enforce them seriously. Moreover, if North Korea was really cornered, it may lash out.

But this has sent China “ballistic” as it is concerned that it will enable the United States to spy into its territory. Beijing is thus imposing economic sanctions on Korea.

The United States is now threatening possible military intervention. But assassination or attempted assassination of Kim Jong-un could result in turmoil in North Korea.

And an attempt to eliminate all of North Korea’s weapons in one fell swoop would be impossible as they are located in many different locations, with some under ground and some even under the sea.

North Korean retaliation would cause massive damage to Seoul, a city of 10 million people only 35 miles from the North Korean border. And military intervention could draw China into military conflict with the U.S.

What the future holds

China has been pushing to reopen the six-party talks. Some experts argue that a grand deal is the only hope — freeze of North Korea’s nuclear programme in return for economic assistance and a guarantee that the U.S would not seek to overthrow the regime.

But the level of distrust between the United States and North Korea is so great that it is difficult to imagine such a grand deal being agreed.

On May 9, presidential elections will be held in South Korea, which will likely be won by the liberal, Moon Jae-in. He is likely to take the softer line on dialogue and negotiation with North Korea.

He could also agree to remove America’s THAAD defensive system, especially in light of the adverse impact of China’s sanctions on Korea’s economy, which is increasingly dependent on China.

From China’s point of view, this would be a positive step in terms of reducing tensions on the Korean peninsular — and also weakening the U.S./South Korea alliance and undermining the U.S.’ position in Asia