He told us who he was: The L.A. Times discovers Donald Trump's vileness — why was any of it a surprise?

Mainstream media are shocked to discover the president is a mendacious bigot. Were they not paying attention? 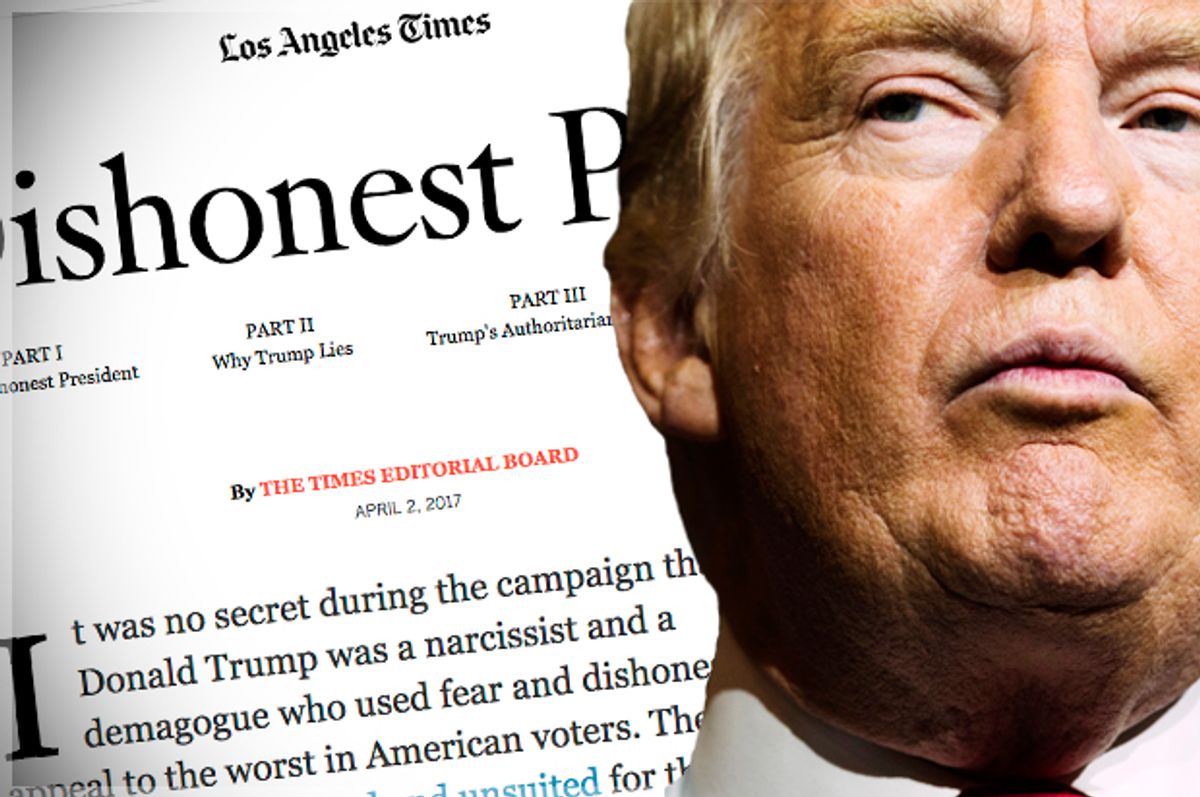 To great acclaim and praise, the Los Angeles Times has made a great discovery. In the opening salvo of a four-part series of essays about Donald Trump, the paper's editorial board made the following pronouncement:

It was no secret during the campaign that Donald Trump was a narcissist and a demagogue who used fear and dishonesty to appeal to the worst in American voters. The Times called him unprepared and unsuited for the job he was seeking, and said his election would be a “catastrophe.”

Still, nothing prepared us for the magnitude of this train wreck. Like millions of other Americans, we clung to a slim hope that the new president would turn out to be all noise and bluster, or that the people around him in the White House would act as a check on his worst instincts, or that he would be sobered and transformed by the awesome responsibilities of office.

Instead, seventy-some days in — and with about 1,400 to go before his term is completed — it is increasingly clear that those hopes were misplaced.

It would seem that the editorial board of the Los Angeles Times has finally found its spine. But alas, this is all too little and much too late. One must wonder — and this is true not just of one newspaper but of the American news media in total — how could Donald Trump's behavior as president possibly be surprising?

Past behavior is an excellent predictor of future behavior. Donald Trump has shown himself to be a neofascist, a professed sexual abuser and adulterer who boasts of grabbing unsuspecting women's genitals. He is proudly ignorant and does not read books. He is a bully. He may be a clinical narcissist. He has surrounded himself with white supremacists and encouraged violence against his political opponents. He is a bigot and a racist. He has open disdain for democracy, admires autocrats and dictators and asked a hostile foreign power to intervene in the 2016 presidential election to help his cause.

He is a serial liar who has bragged about being able to kill people in the street without consequences. He has publicly discussed how he finds his daughter sexually desirable. He has cheated contractors and employees. He curries the favor of criminals and members of organized crime. He publicly encouraged a lynching of the five (innocent) black and Latino men known as the Central Park Five and is beloved by white supremacists and neo-Nazis.

Donald Trump is 70 years old. He is unlikely to change. This is who Trump is as president of the United States. This is who he showed himself to be during his many years in public life before taking the oath of office in January.

Why is Donald Trump's behavior as president at all surprising?

Perhaps the Los Angeles Times did not hear the alarms sounded by political commentators and analysts such as Matt Taibbi, Henry Giroux, Charles Pierce, Charles Blow, Joan Walsh, Chris Hedges, Michael Moore and Amy Goodman about the impending doom that would be a Donald Trump presidency? Maybe those who are somehow shocked by the unapologetic and grand vileness of Donald Trump's presidency did not read the many essays and columns warning of that possibility either in the foreign press or in publications like Alternet, Truthout, Common Dreams, the Atlantic and Salon? Even more worrisome, perhaps the Los Angeles Times did not take its own writing about Donald Trump as a presidential candidate seriously.

The use of the words "us" and "we" in the Los Angeles Times' recent editorial are very important. They signal how the Times, like too many other parts of the "mainstream" or "elite" news media was willfully blind and deaf to those others — people of color, women, Muslims, gays and lesbians and members of other communities — who immediately recognized the clear and present danger to the United States embodied by Donald Trump and the revanchist reactionary Republican Party he represents.

Again, why is Donald Trump's behavior as president at all surprising?

There remains the forensic question: How did the Los Angeles Times and mainstream American news media as a whole get the threat posed by Donald Trump so wrong? There are several answers. None of them are comforting for what they suggest about the health of the Fourth Estate in the United States.

Donald Trump was good for business. The American news media gave him at least $5 billion in free coverage during the 2016 presidential campaign.

The American news media chose to focus on personality-related issues, downplayed Trump's lies and demonstrated incompetence, minimized Trump's connections to Vladimir Putin, and magnified nonstories such as Hillary Clinton's emails in order to maintain the appearance of "fairness" and "balance." These obsessions gave Donald Trump an advantage.

And the American news media created narratives that were in search of facts, such as that Trump's rise was not driven by racism and nativism but instead by the economic anxiety of the "white working class."

The American news media was lazy. It relied on old scripts and expectations that Trump would ultimately "pivot" back to the "mainstream" and become "presidential." Donald Trump has utter contempt and disregard for such norms. He is a performance artist, con man and "postmodern" political personality for the age of reality TV, social media and the internet. By comparison, the traditional American news media were using telegrams and mimeograph machines — and still are.

As a social and political institution, the modern American corporate news media helps to set the national agenda. To that end, its leading figures are affluent and influential. And in that role they are committed to a certain reality and a set of habits and expectations. The more it became clear that Trump was manipulating those rules to his advantage, the more the corporate news media desperately clung to them.

Linguist and media scholar Noam Chomsky described the news media's relationship to power in 1997 in his essay "What Makes Mainstream Media Mainstream":

Okay, you look at the structure of that whole system. What do you expect the news to be like? Well, it’s pretty obvious. Take the New York Times. It’s a corporation and sells a product. The product is audiences. They don’t make money when you buy the newspaper. They are happy to put it on the worldwide web for free. They actually lose money when you buy the newspaper. But the audience is the product. The product is privileged people, just like the people who are writing the newspapers, you know, top-level decision-making people in society. You have to sell a product to a market, and the market is, of course, advertisers (that is, other businesses). Whether it is television or newspapers, or whatever, they are selling audiences. Corporations sell audiences to other corporations. In the case of the elite media, it’s big businesses.

Well, what do you expect to happen? What would you predict about the nature of the media product, given that set of circumstances? What would be the null hypothesis, the kind of conjecture that you’d make assuming nothing further. The obvious assumption is that the product of the media, what appears, what doesn’t appear, the way it is slanted, will reflect the interest of the buyers and sellers, the institutions, and the power systems that are around them. If that wouldn’t happen, it would be kind of a miracle.

In all, American corporate news media outlets gave Donald Trump, the political arsonist, a can of gasoline and a box of matches. They then act shocked when he burns down an orphanage.

Donald Trump is one of the greatest villains in American life. In that role, he is transparent and direct. Most important, Donald Trump has done nothing that he did not already promise to do during the 2016 presidential race: There is nothing subtle about his mendacity or plans for America and the world. To be surprised or shocked by Donald Trump is to admit that you played yourself for a fool.