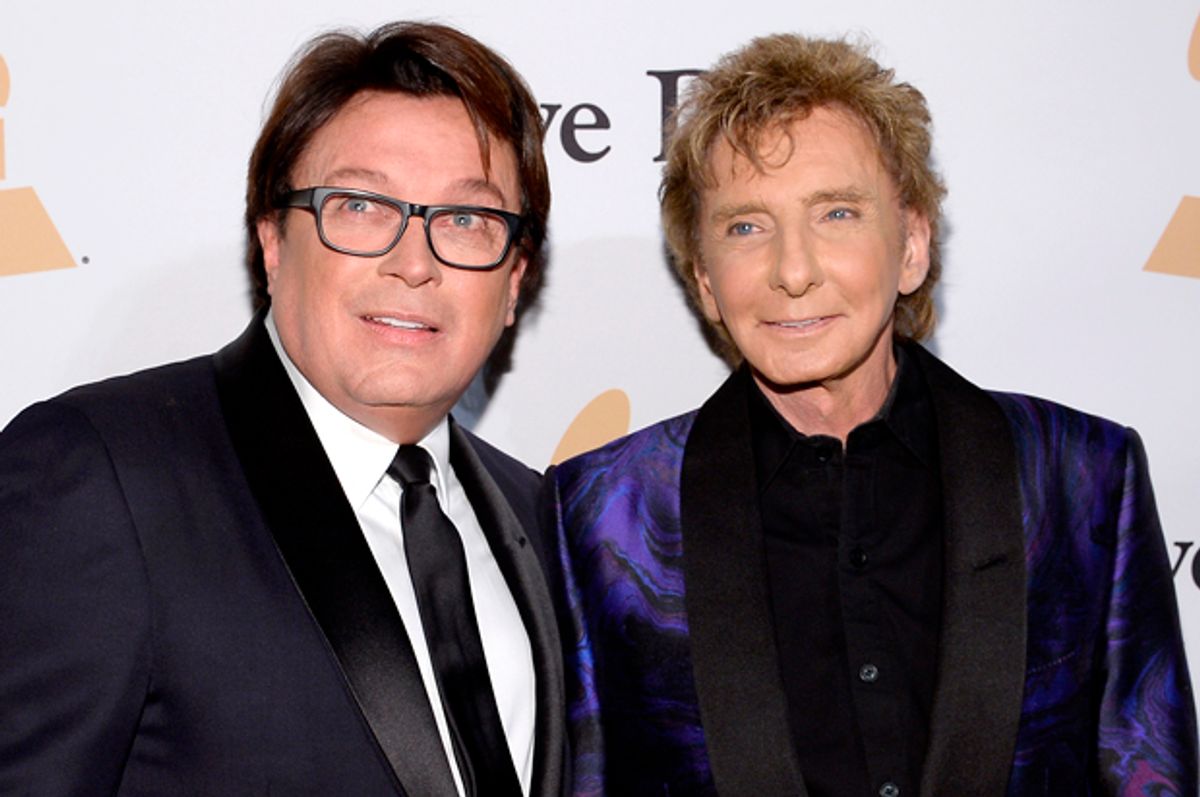 Behind every successful act is two people, a social media storm and a troll or 10. At age 73, Barry Manilow has publicly fessed to the fact that he’s a friend of Dorothy, prompting a font of tweets that run the gamut from meh to feh.

After the monster-hit machine opened the doors of his Palm Springs home and admitted that manager Gary Kief has been his loving partner of 39 years — 39 years!— the Twittersphere erupted with the usual gay jokes, disguised as not-gay jokes, and the expected, gleeful “you go, girl” support as though Manilow were coming out 20 years ago or singing “Mandy” at Stonewall.

But before you say what took you so long, Barry Alan Pincus, read between the tweets! Examine the less-than-subtle racism that pervades these discussions. Why does Samuel L. Jackson's blackness repeatedly come up as a counter-joke to the obviousness? What does Jackson’s race have to do with Manilow’s sexuality? Why are white people continually making this joke? Also, there’s something nefarious about straight people outing ALL the other celebrities who are clearly gay as the day is long. Richard Simmons, they cry. Liberace! Tom Cruise! GAY! GAY! GAY!

This has nothing to do with 45. The support feels equally fatuous, as though rainbow emojis and Yass Kweens are tantamount to action and healthy donations to the Trevor Project. The reflexive simplicity of the response almost makes you wish this news weren’t trending. Or rather, it makes you wonder, when won’t this trend on Twitter? Maybe when the video feed at my wife’s corporate training doesn’t only highlight quotes from “geniuses” who are all straight, white men: Jeff Bezos, Ernest Hemingway, Bill Gates, George Patton. “I don’t measure a man’s success by how high he climbs.” Subtext: “Now it's a disco, but not for Lola.”

There’s a one-joke movie from 1976's “The Ritz,” based on a Terrence McNally play, in which a chubby Cleveland businessman played by Jack Weston takes refuge from a homicidal mobster in a gay bathhouse. Rita Moreno plays Googie Gomez, a Puerto Rican Bette Midler whom everyone mistakes for a drag queen. It takes Jack Weston a while to figure out the obvious: It’s a bathhouse. Everyone there is gay. Gay things are happening. Why can’t hapless Jack Weston see it?

Of course there are so many other big stars we could out if Xenu would let us, stars who are bearding it up in them thar hills, but that isn’t the point. The point is, we are still living in code. It’s a code of hashtags and retweets, but a code nonetheless. As the pop icon himself would say, “Looks like we made it.”