Performing in orangeface: Anthony Atamanuik gets a late-night venue 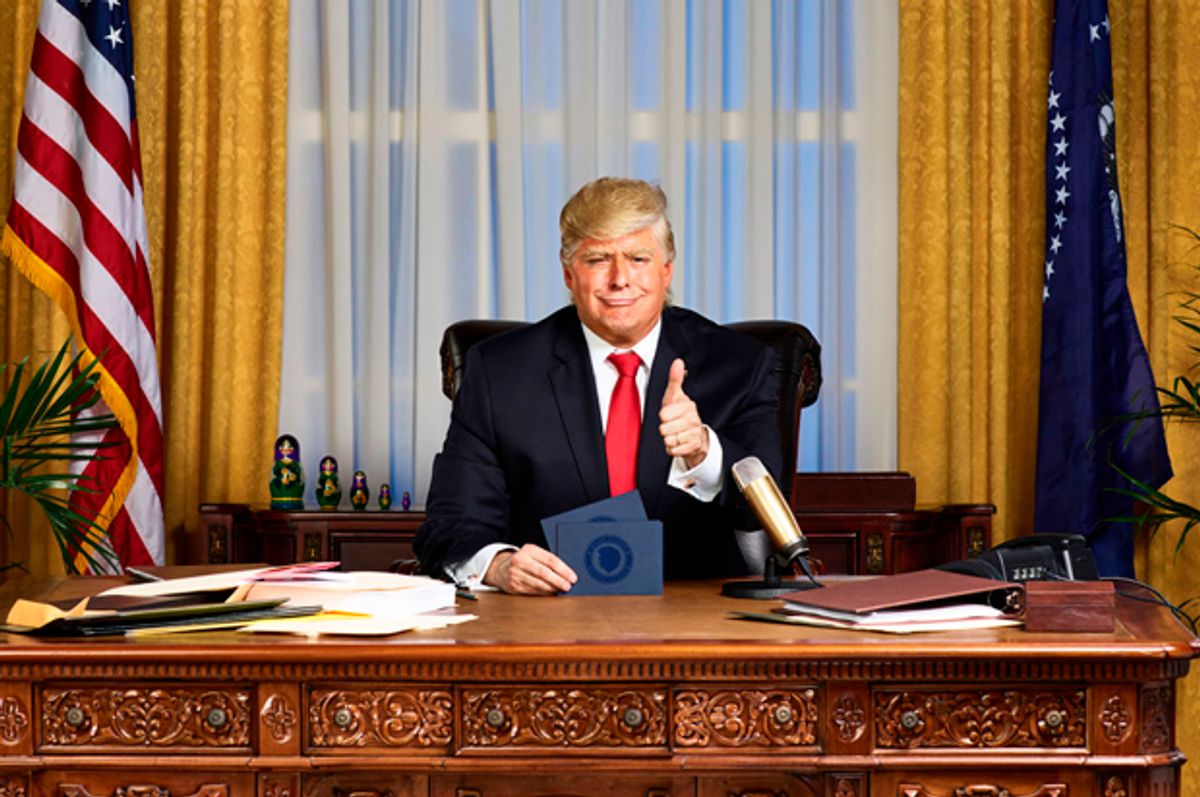 Of all the outcomes that Donald Trump’s presidency could result in, the surest and most benign is that Trump will go down as the defining cultural and comedic muse of this era. And yet, satirizing Trump has proved to be a challenge for most comedians: How do you parody a character who so deftly self-parodies? Who will be to the Trump administration what Jon Stewart and Stephen Colbert were to the George W. Bush administration?

Could that person be Anthony Atamanuik?

Earlier this week Comedy Central announced a new effort aimed at comedically lambasting the president: “The President Show,” according to a statement, will be a weekly late-night show hosted by Atamanuik, direct from the Oval Office.

So who is Atamanuik?

Atamanuik is the author of possibly the second most famous Trump impression (behind Alec Baldwin’s). He gained renown during the presidential campaign for donning straw hair and orange makeup on the “Howard Stern Show,” “@midnight” and a series of viral videos released prior to Election Day. What makes Atamanuik’s impression great is his acerbic style. He has used the impression to scathingly critique Trump on his racism and sexism, for instance. In a mock debate with Bernie Sanders (played by James Adomian), he promises to fuel America not with green energy or coal but with “white power.”

And Atamanuik views his satire as something more than impersonation. In an interview with Rolling Stone, he said, "I did Trump as an act of comedic activism — what Charlie Chaplin did for Adolf Hitler in The Great Dictator — I want to do that for [Trump]."

Prior to gaining notoriety for his Trump impression, Atamanuik, 42, was acclaimed within the improv world. He has co-hosted AssssCAT 3000 and performed in a one-man variety show, “The Tony Show.”

Atamanuik has described his early years in entertainment as having been rough, characterized by drug use and buying services from prostitutes. Those experiences color his Trump impersonation. "My characteristics are a lot like [Trump’s] characteristics,” he told Rolling Stone. “I speak extemporaneously in class without knowing what I'm talking about half the time. He clearly has a severe mother complex — I get that."

Added Atamanuik: "He desperately wants approval, he desperately wants love, he is not psychoanalytically correct, not intellectual. His ego is like a safe, a vault. He's not lying to himself because he believes his ego too much. That's his big failing and what's sad about him."

Only time will tell whether “The President Show” will resonate and transcend a landscape saturated with Trump-related content. (The show premieres April 27.) But Atamanuik’s show will air after the “Daily Show” and, if all goes well, could fill a hole left by another 11:30 p.m. right-impersonating satirist.

But Atamanuik has a different criteria for success: “I’d just like to thank Comedy Central for giving us this platform to speak truth to power and if we’re lucky, end up in prison!” he said in a statement.