Beyond Trump's shameful "blame Obama" response on Syria, the president has no path forward

The White House default setting — it's Obama's fault! — can't hide that Trump has no idea what to do on Syria 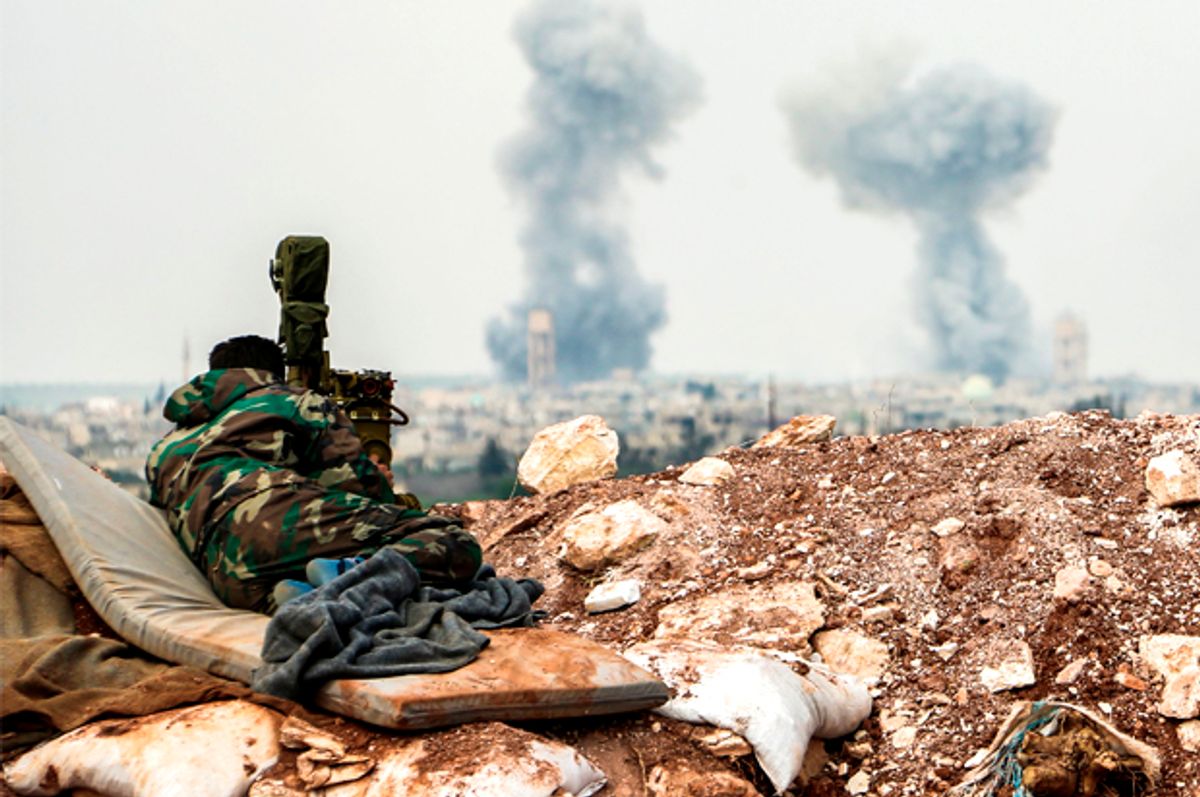 A Syrian forces' artillery observer looks through a scope as smoke plumes rise on the horizon, near the town of Qumhanah in the countryside of the central province of Hama, on April 1, 2017 (Getty/Stringer)
--

In the wake of the brutal chemical attack on a village in northern Syria on Tuesday, the world looked to the United States for leadership. And President Donald Trump's administration responded as it so often does when questioned about an issue: It blamed former President Barack Obama.

Press secretary Sean Spicer said the attack was “a consequence of the past administration’s weakness and irresolution.” The president released a statement that repeated this accusation verbatim and then concluded, “President Obama said in 2012 that he would establish a 'red line' against the use of chemical weapons and then did nothing."

The problem with these statements, aside from the grotesqueness of Trump's using dead civilians' bodies as another excuse to bash his predecessor, is their utter ignorance of history. Whatever one thinks of the Obama administration’s Syria policy, it is simply untrue that our last president “did nothing” about the Syrian civil war and the Assad regime’s use of chemical weapons against civilians.

The Obama administration did quite a lot since Syria’s civil war first started raging six long  years ago. The U.S. military, along with the air forces of allied nations, has dropped tens of thousands of bombs on Syria. The U.S. spent half a billion dollars in a covert effort to arm rebel forces battling Bashar Assad. In 2013 the U.S. joined with Russia to negotiate the removal from Syria 1,300 tons of chemical weapons stockpiled by the Assad regime, weapons which up until that moment the Syrian government had refused to even admit existed.

One can certainly take issue with the effectiveness of any of these efforts. The bombing campaign has been aimed mostly at ISIS and may have hurt the group’s military capabilities. It has also killed thousands of civilians and has helped Assad keep control of parts of his country. The effort to arm rebel groups has turned into a hapless boondoggle that has likely made a bunch of private contractors rich while delivering substandard arms to untrained militias that promptly lost or abandoned much of it. Before Tuesday’s attack, Western nations had long suspected that Syria had not declared all the chemical weapons it has in its arsenal or turned them over. The U.S. and Russia do not have a mechanism to force Syria to comply with its original agreement to turn over all its chemical weapons. And since Syria is one of Russia’s biggest client states, the latter had no motivation to do that anyway.

The Obama administration also made efforts to settle Syrian refugees fleeing the crisis in the United States. That program was one of the first that Trump scaled back after his inauguration, based on his unfounded xenophobic fearmongering about how ISIS terrorists were embedded with the refugees to sneak their way into the U.S. (In the interest of clarity: There's no evidence that this has happened even once.)

Whatever one thinks of all  the Obama administration’s actions, they were not “nothing.” What their collective results reflect is the possibility that there may be nothing the United States can do to end the Syrian war. A bombing campaign against the Syrian army coupled with a full-scale invasion might depose the Assad regime. But Russia has been lending Assad its assistance in the war, so military action would put U.S. and Russian troops on a collision course, a highly dangerous outcome that all sides are eager to avoid.

Even if the Russians didn’t stand in the way of deposing Assad, what happens if the United States is successful with an invasion? The public is highly unlikely to support hundreds of thousands of troops indefinitely occupying another Middle Eastern nation riven by sectarian conflicts. These are all part of the reason why Obama could not secure Congress’ backing to move on Syria in 2013, after a mass chemical weapons attack on civilians similar to the one on Tuesday.

Perhaps the GOP-led Congress would feel differently with a Republican in the White House. Even if it does, there is no reason to believe our notoriously attention-challenged president has the focus to undertake the diplomacy required to build a coalition of allies to confront Assad and Syria, or to see through a years-long military operation, should he go that route.

It may be the case that Syria is a problem for which no outside parties can impose a fix. The Obama administration certainly tried and failed. But there's no reason to think that Trump has even the remotest understanding of the complicated situation he is stepping into or the difficult choices that face him if he really wants to do something about it.

Trump has already given the military a freer hand to make decisions without first seeking approval and the military has moved a handful of troops into Syria to support the rebels. Most likely, he will let America’s generals make the decisions and then blame them for any failures. And Syria will be no closer to peace. If anything, its misery is only likely get worse.