Trump's infrastructure interview with the Times featured his usual roundabout rhetoric, so we decided to keep track 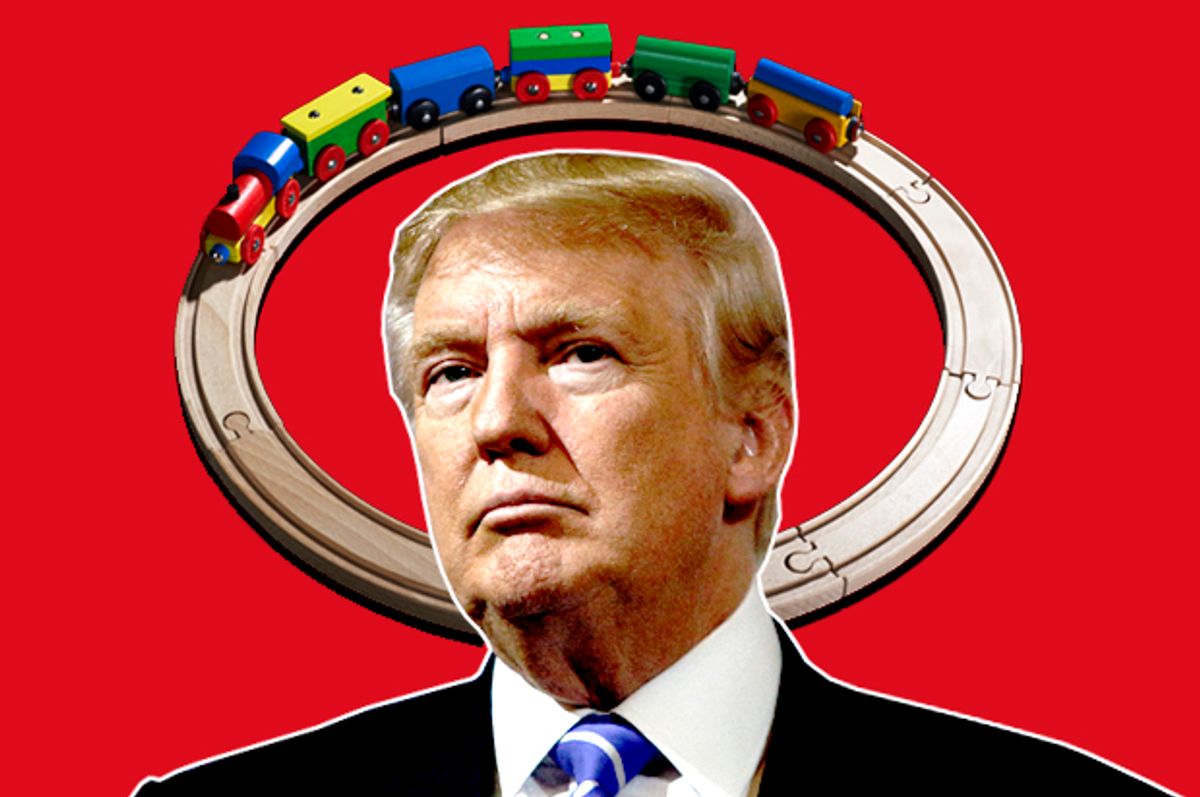 President Donald Trump was interviewed by The New York Times on Wednesday and the focus, according to the White House, was on infrastructure.

Though Trump had no problem being very specific on Fox News host Bill O'Reilly's sexual harassment claims, and also touched on   former national security adviser Susan Rice and Syria, he wouldn't really commit to anything when it came to infrastructure — the topic his administration wanted to talk about.

Here are all the times when Trump refused to give concrete details. We've paraphrased the questions and put his answers below:

What is in the Trump administration's proposed infrastructure plan?

We’ve spent $6 trillion in the Middle East, as of two months ago. Uh, $6 trillion. And yet we can’t fix our own roads and our own highways. And our bridges, which are, in many cases, in very bad shape. And we’re going to have a very big infrastructure plan. And bill. And it’s going to come soon. And I think we’ll have support from Democrats and Republicans.

What does "later in the year" mean when it comes to releasing the plan?

Times reporter Maggie Haberman, who was conducting the interview with her colleague Glenn Thrush, pressed about the timing: "What’s your time frame, at this point, that you’re looking at as an accelerated?" she asked.

How much money will be in this infrastructure plan?

We may take that trillion, and we may also in addition use public-private. But we’re talking about an investment of a trillion dollars.

Where exactly will that money be spent?

On roads, on bridges, on many different things. And it’s also going to be — we have to refurbish to a large extent. You know, we can build new highways, which are much more expensive. And sometimes they’re the highways to hell. You know they’re called, like the Second Avenue subway, the tunnel to nowhere. Which after spending 12 trillion, 12 billion dollars, they realize it now. But you know when they built the Second Avenue subway, you know they never knew where it was going. Did you know this? This was one of the great of all time. And then they ended up finishing it.

How will the Trump administration fund this? Will tax credits or federal funds be used?

Nothing is accurate now because we haven’t made a final determination. We haven’t made a determination as to public-private. There are some things that work very nicely public-private. There are some things that don’t. The federal government, we’re doing very well you saw, a lot of good numbers coming out. You saw our imports. You saw what happened with China. And various other people that this country has been dealing with over the years. You saw the numbers come out today; they’re very promising. Lot of good numbers are coming out.

Well, I may support them, I’m going to look at them. So what I’m doing — is you know — I did great in real estate in New York. I know all the developers. I know all of the folks. I know the good ones and the bad ones. And I’m setting up a commission of very smart people that know how to spend money properly. That know how to build on time, on budget. And ideally, under time and under budget. I’m setting up a commission. It’s going to be headed by [the developer] Richard LeFrak and it’s going to be headed — they’re going to be co- — Steve Roth. R-O-T-H of Vornado. Two very talented, smart, tough people. And they are going to, along with me, put on a group of 20 people, 20 to 25 people on a commission.

We’re going to run projects through them. And they will have great expertise in that room. We’ll have it from both coasts, and right down the middle. We’re going to have representatives from various parts of the country that are all are very, very successful in terms of infrastructure. From different fields but always infrastructure. But everything is going to be run by them. One of the things — you probably saw what I said yesterday — did you see where I held up the deal?

How does Trump's infrastructure plan address the "broken permit system"?

Reed Cordish, assistant to the president and real estate developer, responded, "We can give you the details of it, but that’s such a big part of the story. That’s going to create benefit far beyond the federal dollars that we’re talking about. That’s what’s really going on — unleash the true revival of the infrastructure."

What piece of infrastructure will the Trump administration highlight?

We’re looking at that, and we’re going to announce something very soon.