Pepsi yanked its faux-Black Lives Matter commercial, but white people who treat activism like a trend are real 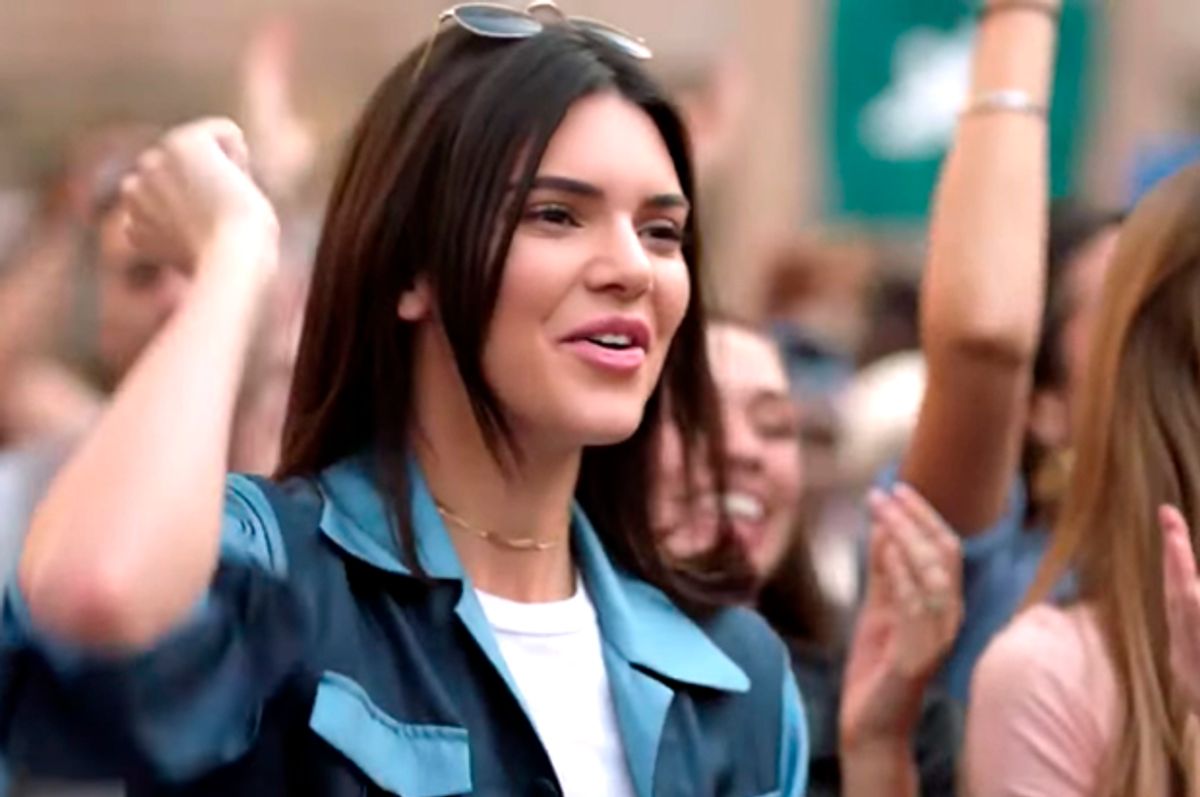 I can’t lie, when the Kardashians added Kanye West to their tribe, I though they couldn’t be any more annoying. It seemed impossible, right? I was wrong. Kendall Jenner has been on the wrong side of a media lashing this week for her appearance in a ridiculously insensitive Pepsi commercial, where she is portrayed as a white Black Lives Matter-like activist, standing in front of a line of police like Ieshia Evans, but apparently with the power to wash away generations of systemic racism with a cold can of Pepsi.

After hours of negative feedback, Pepsi yanked the ad. “Pepsi was trying to project a global message of unity, peace and understanding. Clearly, we missed the mark and apologize," the company said in a statement. "We did not intend to make light of any serious issue. We are pulling the content and halting any further rollout.”

I’m surprised that Pepsi is so disconnected from African-Americans, especially since their syrupy cola has been the official drink of my black experience­­. I can’t remember a reunion or function where my family wasn’t guzzling gallons of it. I’m glad Pepsi trashed the ad; admitting when your company does something extremely stupid is honorable. I’d like to use this opportunity, however, to highlight the real issue: phonies like Kendall Jenner, Pepsi and everyone and everything else that exploits justice movements like Black Lives Matter and tries to use black suffering in general to promote products and build fake alliances.

I normally try not speak for other African-Americans, but I think I represent us all when I say, “Go away!” We already have to deal with oppression everyday; cheesy antics and fake support just get in the way.

You do not have love black people. It is not an American requirement, and we know when you aren’t being sincere — well, most of the time. I do recall speaking at a college in my hometown of Baltimore a few months ago. An outspoken audience member hung around for an hour or so after the event to say things like “I’m so inspired by you” and “you are so great” and “ I’d love to have a drank with you; can I connect with you? I want to make change in Baltimore.”

I’m always flattered when someone connects with my work. I don’t go out for drinks on the spur of the moment, but I jotted down the names of some local activists who needed support, thanked her again and left the venue. A week later I was leaving Red Emma’s bookstore on West North Avenue, near the school where I gave my lecture. It was after 7 p.m. and night was creeping in, but it wasn’t completely dark. As I approached my car I saw the woman from the event and said, “Hello, how are you? Did you reach out to those activists?”

She looked at me with a cold disgust and quickly crossed the street. I laughed as I popped the trunk and loaded my books. This wasn’t the first time I noticed that the way people treat me when I’m behind the podium is completely different from how they treat me on the street. I jumped in my car and cranked the ignition as I tried to drive away, but the same woman came back across the street and blocked my car.

“Professor D. Watkins!” she said approaching my window, “I didn’t know that was you! Can we have that drink? There's so much I want to talk to you about! Are you busy right now?”

I politely asked her to move and pulled the car out. She probably doesn’t even know that she’s a racist, and it’s not my job to explain it to her.

Cozying up to public figures, wearing Black Lives Matter apparel and attending rallies does not make you a part of a movement (especially if you still think that every black person wants to rob you). Pepsi and Kendall Jenner just gave this fake “wokeness” a corporate spin by not only treating racial justice as a bandwagon trend and the people living under oppression and actively fighting it as flavor-of-the-month accessories, but exploiting them to sell soda, too.