Welcome to Syria, President Trump: Years of rational policy led to this horror, and there's no easy way out

If the war Obama and the Pentagon struggled to avoid is now upon us, it's likely to make a bad situation worse 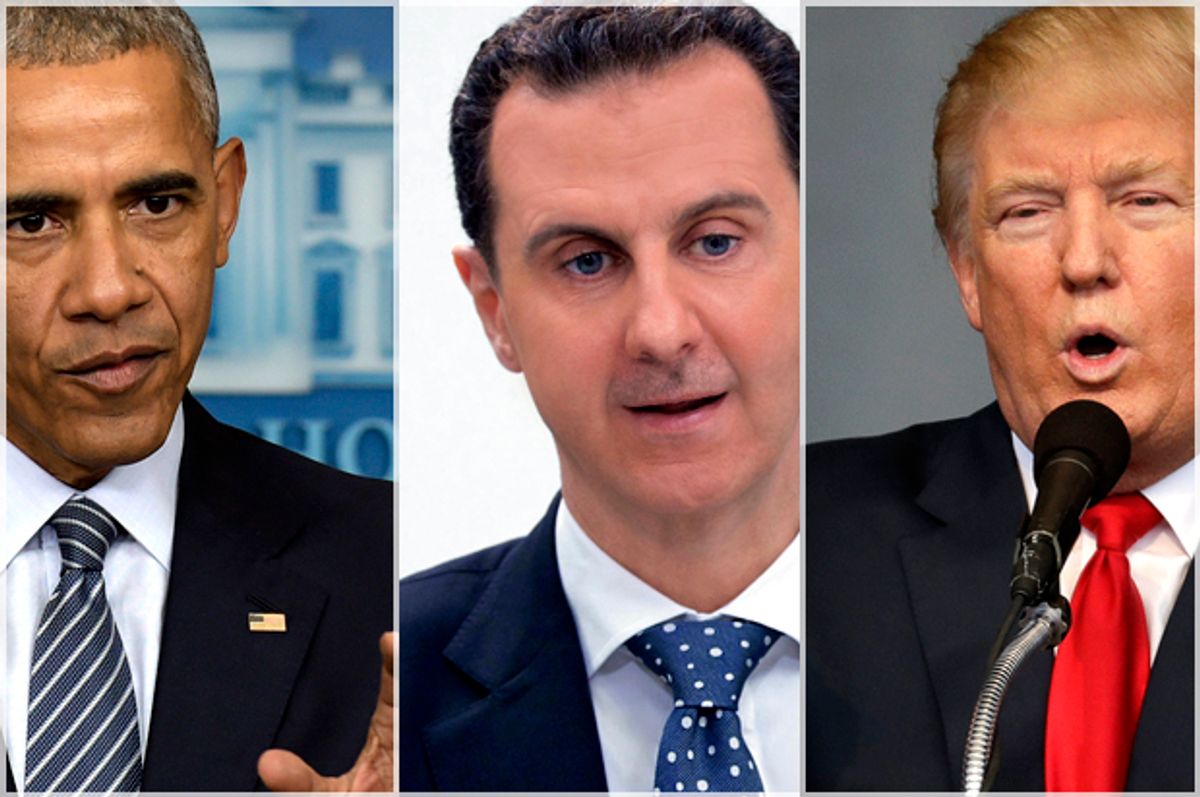 It happened again. Syrian government forces used a chemical weapon against the town of Khan Sheikhoun in southern Idlib province. The horrifying photos were too much to bear, especially given the large number of dead children. Social media went into righteous — and appropriate — rage over the latest of President Bashar Assad’s war crimes but then quickly deteriorated into point scoring among supporters of President Donald J. Trump and former President Barack Obama.

High-dudgeon Twitter is never useful, but it only worsened when the White House released a statement quite rightly calling the attack “reprehensible” and “heinous.” Few failed to notice that the Trump administration’s response to atrocities in Syria sounded a lot like its predecessor’s denunciations of the same. A good time was had by all.

Lost in the Twitter war were some important lessons about the Syrian conflict that Trump, whose administration has seemed content to let Assad remain in power, is now forced to confront. Even now after Trump has ordered up missile strikes, it seems unlikely that the United States will pursue a policy of actual regime change in Syria. Military operations notwithstanding, the Trump policy will look more like the Obama approach than many people now expect.

Over the last six years the United States pursued a policy that was based on a fundamental misunderstanding of the Assad regime, American military reluctance and a public understandably weary of its seemingly endless and violent encounter with the Middle East. The responsible parties for Tuesday’s atrocities reside in Damascus, Moscow and Tehran, but the United States has helped create an environment where Assad believes he can kill people with impunity.

In the last half of 2011 when the Syrian uprising was not yet a civil war, American diplomats in Damascus, Obama administration officials and foreign policy experts across the spectrum believed “it was only a matter of time” before Assad fell. No doubt they were responding to the stunning events around the region where, in the first three months of the year, long-serving dictators in Tunisia and Egypt tumbled or, as was the case in Libya, were on the ropes.

When Syrians showed up to protest in the southern town of Daraa in March 2011, there had already been demonstrations in every other Arab country save Qatar and the United Arab Emirates. It was the so-called Arab Spring, after all, that moment when people power would sweep away repressive regimes in favor of more open, just and democratic ones. Because Tunisia’s President Zine El Abidine Ben Ali stole away to Jeddah and Egypt’s Hosni Mubarak was sent packing off to Sharm el-Sheikh by his defense minister with relatively few casualties, it apparently never occurred to anyone that the defenders of the Syrian regime would shoot at protesters.

When Assad’s opponents took up arms in the summer of 2011 to protect themselves and fight back, the Syrian leadership applied more and more force. For Assad, his family and their allies, there were incentives to fight their way out of the problem of the uprising. After all, the Assadists clearly believed they had superior firepower, everything to lose from not militarizing the conflict, and the dreadful precedent of the Syrian regime's 1982 assault against a Muslim Brotherhood-inspired uprising that killed an estimated 25,000 people. Unlike in Tunisia or Egypt, there was no autonomous military to put a brake on the worst instincts of the regime’s loyalists; the Syrian military’s fortunes were inextricably linked to those of the Assad family.

The only possible way to avoid the humanitarian disaster, which Syria has become, seemed to be through an early intervention into the conflict. There was no appetite for it, however. The Pentagon, which had to be dragged kicking and screaming into the Libya operation, wanted no part of the Syria conflict. Military officials said it would be complicated and costly — in terms of money and potential casualties — and would require a significant deployment of force.

Politically this was a nonstarter for Obama, who campaigned in 2008 in large part on getting the United States out of wars in the Middle East, not getting the country into more of them. There was also little reason to believe that the American public would support military operations in Syria not long after the U.S. withdrawal from Iraq, or ever. When the Obama team contemplated punishing Assad for his use of chemical weapons in the summer of 2013, more than two-thirds of Americans were opposed to this. For their part, some Republicans consistently demanded that Obama should “do more” in Syria, but overall the GOP was not willing to give him the political support to go to war, especially since the Democrats in Congress did not favor the move.

As various Obama administration officials have argued, there was no guarantee that an intervention in 2011 or early 2012 would have worked, or that it would not have sucked the United States into a vortex of violence. They may very well be correct. And therein lies the central problem of America’s Syria problem: The Pentagon, Obama, members of Congress on both sides of the aisle, Obama’s advisers and the American people all made rational decisions regarding Syria, and yet this all compounded the disaster.

Since 2012, the Syrian conflict has evolved from an uprising to a civil war to a conflict among regional proxies to a zone of jihadi violence to an area of great-power competition. Syria is a place with a dizzying array of fighting groups (with some linked to jihadis and others not): Kurdish forces, Hezbollah, Iranians, Russians, some Americans, Turks and pro- and anti-Syrian government forces. The Americans who are there have been deployed to help a Kurdish and Arab force take Raqqa, the self-declared Islamic State’s Syrian capital. The Russians, Iranians and Hezbollah are there to ensure the Syrian regime’s survival. Al-Qaida-affiliated groups are there to wage jihad against Assad and, it turns out, other anti-Assad groups. The Turks are there to prevent Syria’s main Kurdish political party and its militia (which is linked to a Turkish-Kurdish terrorist group) from establishing a statelet in northern Syria.

In March, Russian, Turkish, American and Syrian government forces all found themselves in mortar range of one another. The competing interests and conflicting agendas make it hard to discern how an American intervention could make things better, even though few could argue with its moral rationale after the Khan Sheikhoun massacre. It is also a situation made possible by rational decisions that American officials made over the course of the previous five years.

Perhaps Trump, Secretary of Defense James Mattis, Secretary of State Rex Tillerson and national security adviser H.R. McMaster have the diplomatic, military and political skills to devise an intervention that simultaneously punishes the Assad regime, forces the Russians to back down, relieves Syrian suffering, restores American credibility and does not leave U.S. soldiers in the Levant for years to come. If they do not, it is not because they are indifferent — an unfair charge often leveled at the Obama administration’s Syria policy — but rather because the situation in Syria is complex in ways that cannot be captured in 140 characters of outrage.

Many smart people have devoted long hours of study and deliberation in an attempt to devise an intervention in Syria that satisfies these requirements only to fall short in one area or another. The strikes on Syria for what Trump has called crossing “many, many lines” will not likely change much unless there is a broader strategy to push Assad from power. That would require significantly more military force than the Trump administration’s salvo of missiles on Thursday night. Critics will argue that Trump has opened the door to a wide range of options for regime change in Syria, but thus far no one has produced a coherent plan to realize that goal. The attack on Khan Sheikhoun is what Beltway types often call a "clarifying moment." It has once again demonstrated the monstrousness of the Assad regime, and also Washington’s limited options in Syria. Welcome to the world, President Trump.