I’m glad my dog is dying

Death is not complicated; it's simple. But explaining the reality of it to a child, gently, is the hardest thing 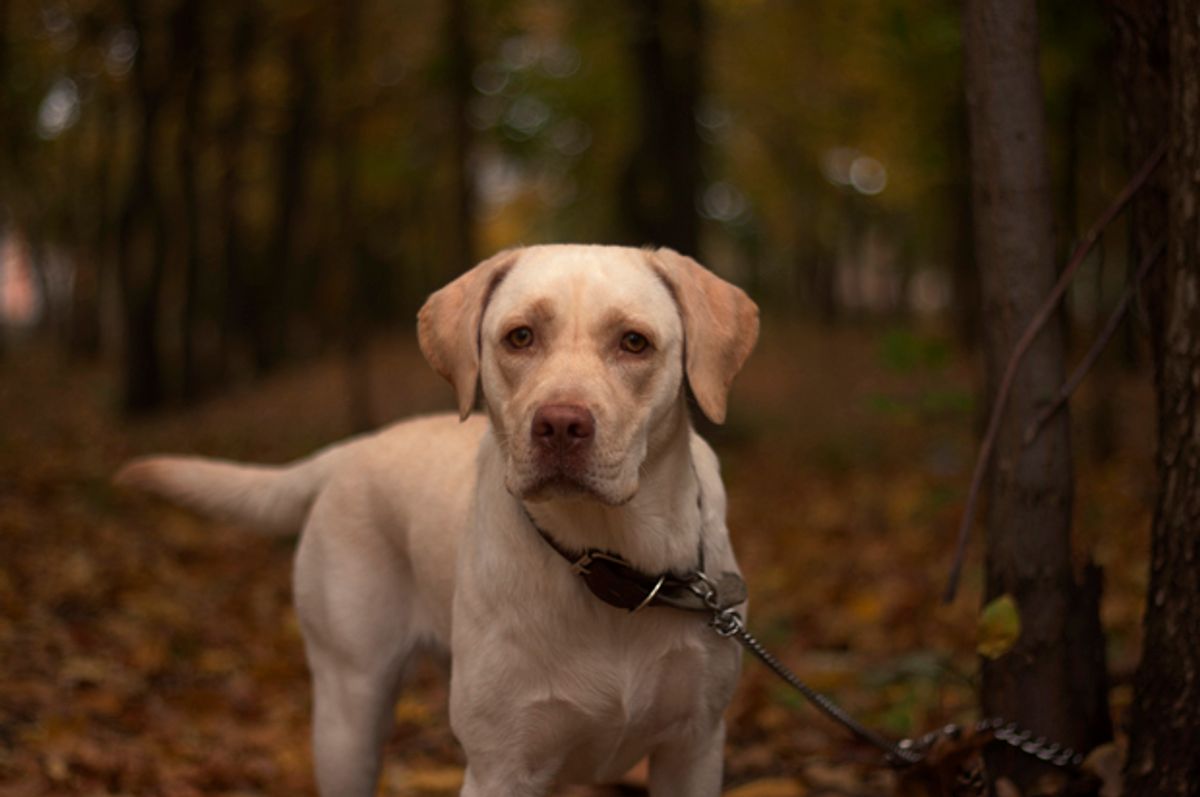 My dog is not doing well. She’s a rescue mutt — one part yellow lab, one part shepherd, a dash of hound, a pinch of golden. She is 15 years old and looks it. She sleeps a lot and has trouble standing up. Her joints crackle like cereal in milk. Her face, which for so long had been the same shade of blonde-orange and black as the rest of her, now is white as campfire ash. Her eyes are glassy. Her breath is terrible. And somewhere under the shallow dome of her skull, a tumor is wedged like a pebble in the folds of her brain, weakening her hind legs and occasionally sending her into fits and seizures.

Generally she is okay, though she can be difficult to care for. She falls a lot and has to be hoisted up. Her medications make her thirsty, and all the drinking makes her have to pee, and so most nights I’m awakened to find her panting in my face or pacing around my bedroom, and I have to slide my body out of warm, gelatinous sleep, and put on pants, and walk with her down the stairs, put on the light, slip on some shoes, and stand in the cold and dark while she sniffs the air. I get impatient, and then I feel guilty. I shove her back inside. I push her up the stairs. In the morning, I make it up to her with love and pepperoni, unless there’s a poop in the house, in which case no pepperoni. Often, there is a poop.

Her medications are expensive. Her care is inconvenient. She tests the limits of my compassion daily, and this has gone on for months. It can be exhausting, but I would do it forever if I could because she is a good girl and her paws smell like graham crackers and she is soft as a down blanket and when she is gone I will be sad sad sad.

My daughter is five. She can spell the word Fifi. She loves frogs and pancakes and the song “Welcome to New York” and she wants to know where we go when we die. It’s a tough question to answer. The first time she asked it, I was not prepared. My wife and I had not discussed it beforehand, had not formulated a strategy for being honest without traumatizing, for draining high emotion from our explanations, for navigating the intricate complications of religion. When she asked, I didn’t know what to say. My immediate reaction was to demand an explanation from her: Who taught you that word? It was as if she’d politely requested I go fuck myself. But I recovered. I was nimble on my feet. I told her I didn’t know and asked if she wanted a hot fudge sundae.

That worked, but only for as long as it takes for a 5-year-old to eat a hot fudge sundae, which, I was glad to find, could be up to an hour. But when she kept asking I finally just told her, “Heaven. When we die we go to heaven.” I felt like a dirty liar and a failure. I considered backtracking, going over all the options and letting her decide for herself which one seemed the most plausible, but I didn’t really feel qualified to give her a comprehensive overview. And my second impulse was to swing the other way, to tell her that death isn’t real, that no one ever dies, to shield her completely from this thing that no one could explain and that no one would force her to engage with if she didn’t want to. “Forget it,” I wanted to tell her. “You’re five. You don’t have to believe in this.”

But heaven was already on the table, so heaven is what we went with. And heaven solves a lot of problems: it’s a place, for one. It’s somewhere, rather than nowhere. I can ask my child to wrap her mind around somewhere, but I cannot ask her to consider the possibility of nowhere. The possibility of nowhere gives me anxiety! My goal is to spare her that anxiety for as long as possible, to push her as far from the sinkhole of existential dread as I possibly can.

Of course, she had questions. Where is heaven? What do you do in heaven? Can we visit people in heaven? Those were easy enough, but they morphed into more troublesome questions: Why do people die? Does everybody die? Will you die? When will Grandmommy die? I don’t want to die.

The first real deceased person I ever saw was my grandmother on my mother’s side. Or it wasn’t my grandmother; it was the remnant of my grandmother. It was what my grandmother left behind. Either way, it was traumatic. I was in my twenties by then, and had been lucky. I’d known death peripherally, but here it was in person, tapping at the window.

I’d never seen a corpse before, and the experience was unsettling. It looked artificial in a way I hadn’t been expecting, the opposite of lifelike. It looked like a hasty replica of someone’s memory of my grandmother, puffy and soft like a plush doll. It was hard to take in. I couldn’t believe I was being allowed to see it, to stand before it, couldn’t believe that they’d just left it out in the middle of that room, couldn’t believe I was allowed to lift up the casket, to carry it like a sofa up a wet hill, to set it down next to a hole, to walk away and just leave it there. And I sure as shit couldn’t believe that I was expected to eat cold cuts afterwards, to drink Sprite, to have a piece of cake. What the fuck was that?

I wasn’t particularly close to my grandmother — we lived hours apart and only saw each other maybe once a year, less as I got older. I wouldn’t say that I felt particularly close to any of my grandparents, which is not to say I didn’t love them. I did. But I think about the trauma of that experience and how it sticks with me to this day, well more than a decade later, and I wonder how much worse it might have been if I had been close to my grandmother, if my love for her was like a warm bed I could crawl into, like hot caramel I could fill my body with, if I felt for her the way my daughter feels about her grandmothers.

My daughter loves her grandmothers absolutely. They spoil her in ways my daughter finds delightful. They provide a love that’s like molten lava cake: chocolate on the outside, with more chocolate on the inside. They are long arms and soft laps and warm, welcoming faces. She loves them.

My daughter has a relationship with her grandparents — all of them — that is nothing like the one I had with mine. As it happens, I live with my wife in the same town as her parents and my parents, and so my daughter sees them pretty regularly. She spends one day a week with each of her grandmothers, and has since the day she was born. They are close. To remove one of them from her life would be an unconscionable act of pointless cosmic cruelty. It traumatizes me to imagine it, and so I don’t. If my daughter brings it up, I respond emotionlessly and let the topic fizzle. It’s an impossible concept to explain. I let her questions exhaust themselves and we move on; my daughter learns nothing new and remains perpetually confused. It’s the best that I can think to do.

The safest bet is that I never even bother to try explaining it. It would be less than futile — it would only make things worse. And the one thing I know for sure about death is that it can’t be explained, it can only be experienced. Which sucks.

The good news here is that, out of everyone in my daughter’s life, the one who is the oldest, the most infirm, the closest to the end is the dog. The dog, who — if you can believe the calculations — is 105 years old. The dog who my daughter likes but doesn’t love. The dog: sweet, gentle, endlessly accommodating. The dog, who drives me fucking bananas. The dog.

We had the dog 10 years before my daughter was even born; never once did I entertain the thought that she’d come in handy for the demonstration of an abstract concept to a curious child. I thought she’d be my pal, which she has been. I thought she’d eat the fatty ends of my bacon strips, which she does. I thought she’d sleep on the floor at the foot of our bed, thought she’d twitch and grunt at her dreams, thought she’d lift her smashed face from the carpet and blink at me without a single thought behind her eyes. A warm pile of fur always just in my periphery, waiting for a walk, sniffing for a crumb.

And now I find myself in the disorienting position of thinking that in the very best-case scenario — in the version of events where everything goes as well as it possibly can and every grandmother and grandfather and aunt and uncle and cousin and teacher and friend remains in perfect health for years and decades to come — the best we can hope for is that the dog will die.

This is the reason, I guess, that parents buy for their children hamsters and goldfish, and if I had been a smarter parent I would have stocked the house with them. But we don’t have any hamsters. We never won any goldfish. All we have is the dog and each other. And so it comes down to the dog. It’s up to the dog to answer my daughter’s unanswerable questions, to illuminate that dark crevice in her wondering mind, to nudge her over that first little threshold from innocence toward experience. If she has to learn this lesson — and she does — I hope the dog is the one to teach it. I hope it’s quiet and painless. And when it’s done, and we’ve all learned what we need to learn, we’ll stroke the dog along her barrel ribs, we’ll press our noses to her flabby jowls, and we’ll whisper our thanks into her ear, tell her that she’s done well, that she’s a good girl, that she’s a very good girl.

Joe P. Squance is a writer, editor and teacher in Oxford, Ohio.