The NCAA caved to anti-LGBT hate: The real reason March Madness is coming back to North Carolina 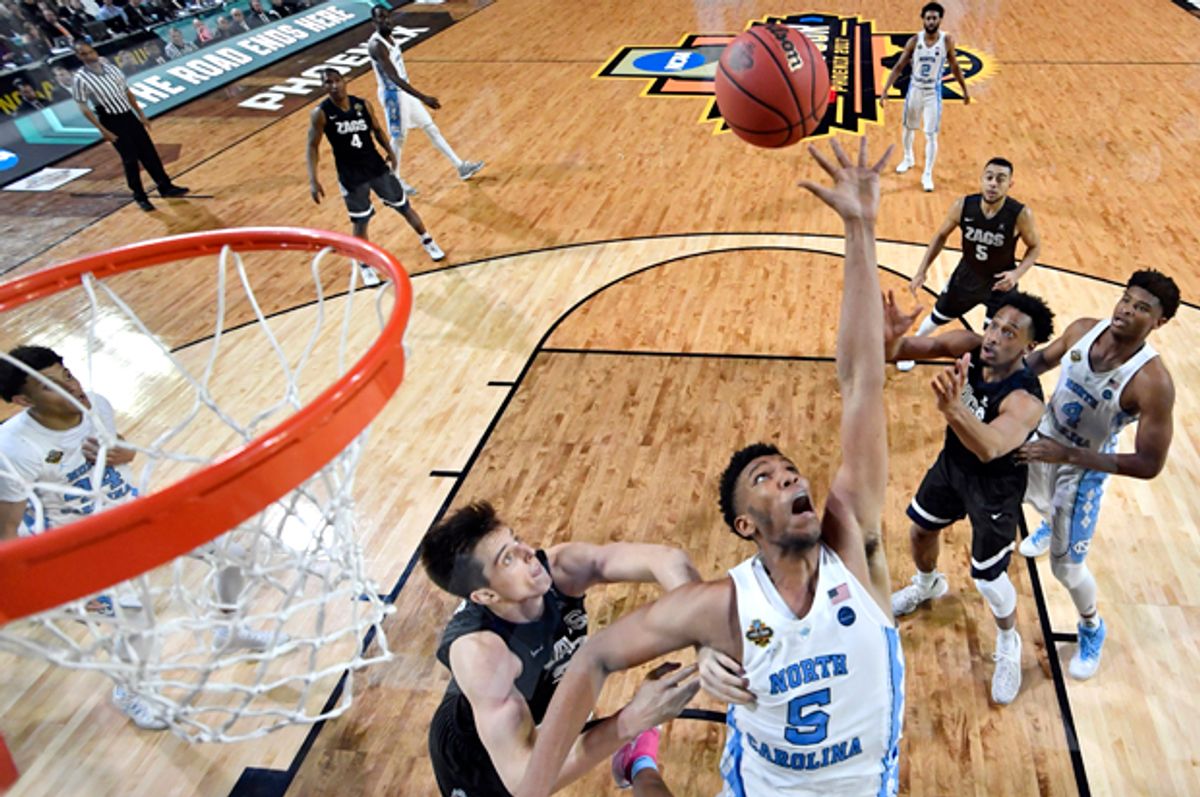 It was the biggest race of his career, and Chris Mosier was worried about getting beaten up.

Mosier, a 36-year-old transgender athlete, was competing in the national championship of the men’s long-course duathlon. If he finished in the top 18 of his age group, he would qualify for the world championship match, held in 2017. But when he arrived in Cary, North Carolina, last May, the state had just passed House Bill 2, an anti-LGBT law that prohibited trans people from using the restroom that corresponds with their gender identity.

Mosier, who came out in 2010, was so concerned about being attacked that he didn’t wear his Team USA bib because he “didn’t want to draw attention” to himself.

“I felt very much like I had a target on me simply for showing up for a race that I trained very hard for and that meant a lot to me,” Mosier said. “How ridiculous is it that I can compete on behalf of my country internationally at the highest level of my sport and yet I am not safe participating in events in North Carolina because of my gender identity?”

That law will effectively remain in place after legislators struck a deal that retained its most discriminatory provisions. Republican legislators pushed a “compromise” bill known as HB 142, which prohibits cities from passing trans-inclusive protections until 2020, to meet a looming deadline from the NCAA. If the General Assembly didn’t repeal HB 2 by March 30, North Carolina would forfeit hosting March Madness games for the next five years.

The state passed HB 142 just hours before the deadline, and the NCAA announced that the Tar Heel State would be eligible as a championship site once more.

The decision from the NCAA, which declined requests for further comment, has made what was already a bad situation in North Carolina even worse. LGBT advocates told Salon that by caving on anti-LGBT bigotry, the NCAA has emboldened Republican legislators hoping to pass bathroom bills identical to HB 2 in their state. But as critics argue, this move shouldn’t be a surprise from a sporting association they say has allowed discrimination in its ranks for years without taking action to stop it.

Getting fired for being LGBT

When Lisa Howe and her partner got pregnant, the women’s soccer coach asked the administration at Belmont University if she could tell the members of her team she was expecting. Howe would start showing soon anyway. She claims that athletics staff initially failed to respond to her request, but then after a few weeks, they told Howe that she had a decision to make: step down or get fired. She left the team in 2010.

That alleged action was legal under the school’s bylaws and state law. Tennessee is one of 28 states where you can be let go from your job for being LGBT.

Although Belmont has since updated its policies to prevent discrimination on the basis of sexual orientation, there have been claims of similar incidents at Drake University and University of Minnesota-Duluth. In 2015, three coaches sued Minnesota-Duluth alleging what OutSports editor Cyd Zeigler claimed in a phone interview was the “systematic firing and demotions of lesbians” on campus.

Shane Windmeyer, the CEO of Campus Pride, added that there are around “30 campuses that discriminate openly against LGBTQ students through Title IX exemptions.” Title IX of the Education Amendments of 1972 prohibits discrimination on the basis of race, sex and national origin in schools, which was later expanded to include LGBT students. Colleges exempt from these guidelines include Brigham Young University and Liberty University, which have policies forbidding homosexuality in their honor codes.

Windmeyer said that for six years, Campus Pride, a LGBT nonprofit based in Charlotte, has been advocating that the NCAA take action to stop discrimination at its universities. It has not done so. He believes that says a lot about the NCAA’s decision on HB 2.

“Why would we expect the NCAA to hold North Carolina to a higher standard when it came to LGBTQ inclusion?” Windmeyer argued.

If the NCAA has failed to take action against discrimination in its member institutions, why did it bother getting involved in the fight over HB 2?

“It was a gun to their head,” Ziegler said. “The NBA announced it was pulling out of North Carolina. So many other places and so many other businesses had already pulled out. The NBA was the one who made the big first move in the sports world, and the NCAA was just following what they were doing.”

Following the passage of HB 2, the NBA announced that it would be moving the All-Star Game from Charlotte, where it was scheduled to take place in February. That decision cost North Carolina an estimated $100 million in potential revenue, and those losses only increased as other sporting leagues followed suit. Last September, the ACC said that it would also be pulling all championship games from North Carolina until the bill’s repeal.

LGBT advocates argued that despite claims that HB 2 has been repealed, almost nothing will change in North Carolina.

HB 142, the new legislation, stipulates that only the state can regulate bathroom access in private facilities; given that the Republican lawmakers behind the bill are the same ones who passed HB 2, those policies will likely continue to discriminate against trans people. Although HB 142 allows an exemption for colleges, Mosier said that trans people — students or otherwise — still have to use the bathroom off-campus. When he visited North Carolina, he was so scared to get out of his car he pumped his gas across state lines.

“It’s not only that the NCAA is condoning this behavior,” Mosier said. “They’re rewarding discriminatory conduct in North Carolina. That sends a message to transgender people across the country that they are not safe as more states start to pass comparable legislation without the fear of consequences.”

The ‘cash cow’ in the room

The NCAA’s decision gave Republican lawmakers attempting to push through anti-LGBT legislation in Texas hope that their state would not face the same backlash as North Carolina. The Associated Press estimated that the Tar Heel State would lose $3.76 billion over the next 12 years if HB 2 weren’t struck down. Dan Patrick has claimed that the statement from the NCAA shows that SB 6, a bathroom bill known as the Texas Privacy Act, is “not in conflict” with the league’s policies on anti-discrimination.

Wade Davis, a former pro athlete and a consultant for the NFL, said that it would have been better for the NCAA “to stay out of it.”

“No one on the board of directors said, ‘Hey, let’s actually talk to the people who are impacted by these laws and see how they feel about the so-called repeal of HB 2,’" Davis  said. “There was no actual due diligence because if there were, they would have found out that not one trans person would actually be in favor of the bill.”

Davis claimed that it likely came down to a financial decision for the NCAA. North Carolina, he claimed, is a “cash cow” for the league. The men’s basketball team from the University of North Carolina at Chapel Hill has won two straight championships titles — and has claimed eight in total since 2005. Rival college Duke University, which is located in Durham, boasts five titles since 2000.

“From a business standpoint, it doesn’t make sense to keep basketball out of North Carolina,” Davis said.

A double standard on intolerance

Mosier said that what is surprising, however, about the NCAA’s decision to allow March Madness games to be held in North Carolina once more is that the sporting association “avoids locations that are associated with symbols of intolerance and discrimination.”

“The NCAA doesn’t permit any predetermined events in states that fly the confederate flag,” Mosier explained. “They don’t allow any championship events to be held at schools with mascots that are hostile, offensive, or abusive to Native Americans. HB 142 is now more than just a symbol of intolerance. It’s an impediment to the inclusion, equality and well-being of LGBT people.”

LGBT advocates plan to fight the NCAA decision by continuing to advocate for equality and inclusion in all of its policies. In a letter addressed to the league, 166 athletes urged the NCAA to continue boycotting discrimination in North Carolina.

Ziegler isn’t optimistic though, given the NCAA’s spotty track record on LGBT issues. “They’re not changing their minds on this,” he said. “That ship has sailed.”