Trumpcare fiasco proved it: Republicans are utterly divorced from reality

Conservatives have long accused Democrats of not living in reality. The fight over repealing the ACA says otherwise 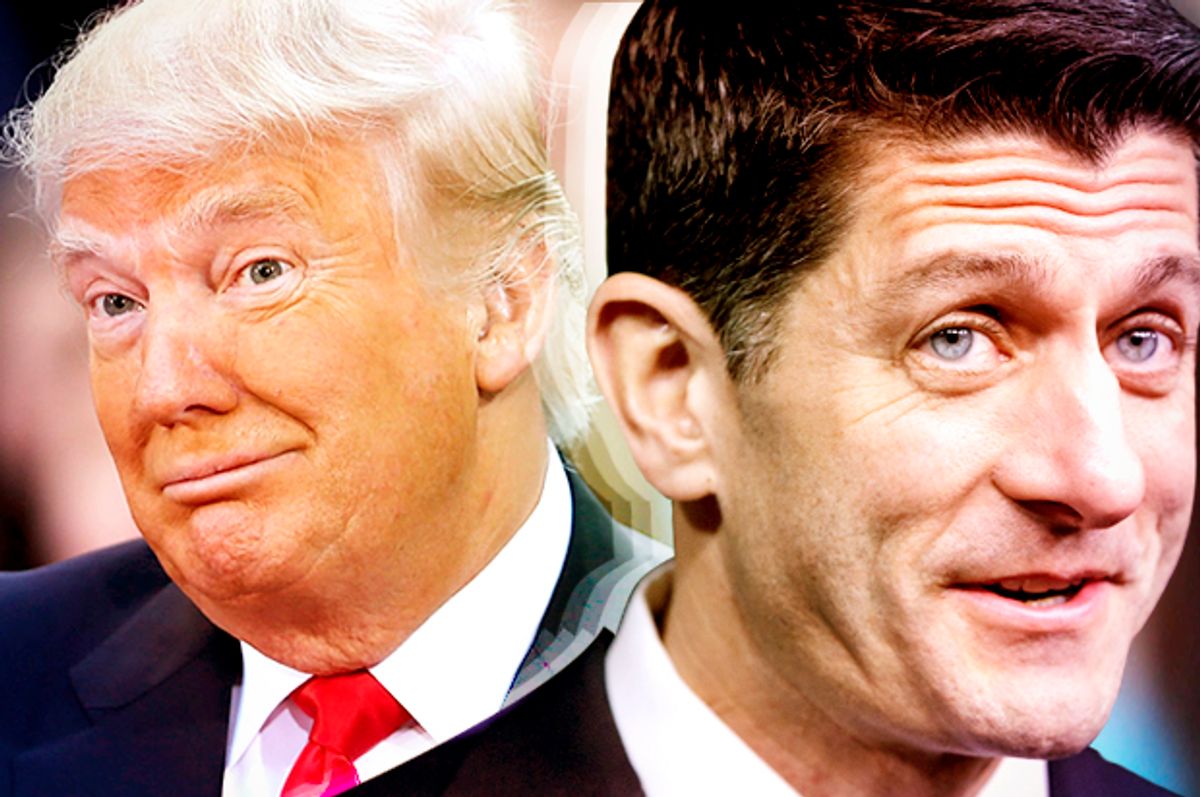 One of the few gifts of Donald Trump's presidency is that it unmasks all the hypocrisy and inanity of right-wing ideology. It is almost as if Trump were a brilliant saboteur on an undercover operation to expose members of the increasingly powerful far-right fringe as incapable of governance and barely able to dress themselves in the mornings. Unfortunately, secret agent Trump’s aim is a little wide. Along with the delusions of the radical right, he will also damage America.

Trump’s election, as surreal as it seems, fits into a larger pattern that's observable in modern American politics. A Democrat assumes power and performs his administrative tasks with competence and diligence. His policies, while insufficiently progressive for many leftist voters, result in the general improvement of living conditions for millions of people. Throughout the Democrat’s tenure, the right wing grows hostile and enraged, while building media empires to lure Americans into the opposition. As enticement they use abstractions that appeal to the default setting of mainstream, white American culture: bromides about “personal responsibility,” “big government” and “rugged individualism.”

Then white Americans elect a Republican, thinking he is going to “clean up Washington” and “help business” but are soon horrified to find that Republicans do what Republicans always do. They eliminate social services, reduce public aid, manage public institutions as illiterate fools and threaten to take the country to war.

Playtime lasted only months with Trump, whose health care policy amounted to encouraging Americans to save money to pay for health care themselves and giving the poor more “options,” as if members of an impoverished family on Medicaid carefully review all available health insurance packages, and after consulting an accountant, decide that Medicaid was best for them. The entire reason they are on Medicaid is that they have no other options. Anyone in the real world would understand the consequences of poverty, but Republicans emigrated from reality in recent years and then built a wall behind them to keep themselves out.

For decades, conservatives have accused liberals of living in a fantasy world of utopian idealism. While liberals believe that big government can solve every problem with more money, conservatives insist that only they have the practical wisdom necessary to make tough choices. Now long after former President Barack Obama and his political allies spent months poring over the details of the Affordable Care Act, barely managing to get it passed, it is the “hard-nosed” conservatives who complain that health care is “complicated” or who struggle to explain how insurance works. It turns out it is easier to shout, “socialism” and to make racist innuendos than to reform American law and grant millions of people access to decent medical treatment.

Right-wingers are now lost in a labyrinth of theory. With no historical precedent or comparative evidence, they claim that the “free market” will solve every problem. Entirely divorced from the reality of real human lives, conservatives resort to emotional appeals to individualism in the face of suffering even when institutional intervention could offer alleviation.

Fearful that Trump and House Speaker Paul Ryan’s health plan might allow some poor people to take medicine, the bonkers House Freedom Caucus opposed the bill, creating a political fiasco. After eight years of promising to “repeal and replace” Obamacare, Republicans collapsed and fumbled at the 1-yard line. Several Republicans in the Senate, who have to contend with a statewide electorate of liberal, moderate and conservative voters and who have some attachment to the real world, opposed the bill because they feared the anger of constituents who would lose their health care. Reasonable citizens should feel grateful to the Republicans for subverting their agenda, regardless of the intentions, but the reasons they have cited demonstrate the difference between the abstract and the concrete.

The problem of American politics, and right-wing governance, is not that Trump is a wrecking ball in human form or that congressional Republicans are oblivious to any truth excommunicated from the laissez faire free market cult, but that so many voters — namely white ones — remain susceptible to Republican abstraction of concrete, quality-of-life issues.

During the health care debate, many reports detailed how Trump voters were terrified and angry that they would lose their health care coverage if Trump and Ryan succeeded. One can only stand in awe of these people. Attempting to figure out what drove them to the polls, and how they could express surprise at Trump's doing exactly what he promised to do, is about as easy and as enjoyable as attempting to break down a brick wall with your forehead.

Those equipped with helmets might want to consider how white rural, and often suburban, culture is reflexively conservative in the sense that it believes only “bad” people — which is code for people of color — receive government assistance. If rural types receive government assistance, they believe they are exceptions and that certainly Donald Trump will make the appropriate distinctions.

I remember having a conversation with a man looking for an open ear in a bar. In the middle of a rant against Barack Obama, he remarked that he “doesn’t want government running health care.” I asked him how he obtained health coverage. His answer: “I get mine through the VA.”

When I covered a Tea Party rally in Indiana, I politely withheld comment while listening to a man pontificate at length on the evils of “big government.” He was wearing a T-shirt from Yellowstone National Park.

Stories of dislocation between right-wing belief and behavior are common but not simply because “small government” conservatives are all shameless hypocrites. Many of them are sincere but unaware of the cognitive dissonance. Right-wingers' blind spots are exactly why rational arguments in favor of social services and public programs so often fail to persuade them. It is not an intellectual but a psychological problem.