Rhea Perlman and MyLifeAsEva star Eva Gutowski head up “Me and My Grandma,” now live on YouTube Red 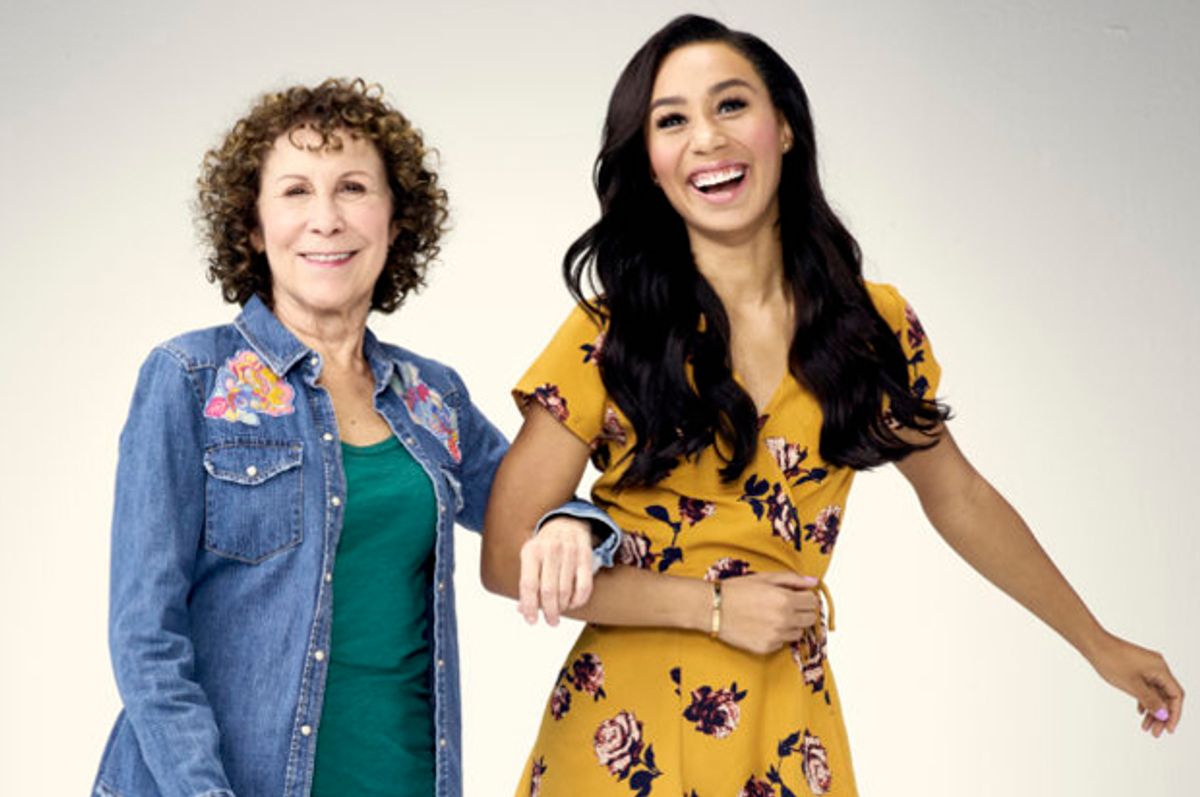 Me and Grandma (SelectNext/Youtube Red)
--

At the beginning of the second episode of “Me and My Grandma,” the titular Grandma, played by TV icon Rhea Perlman, is discussing the meaning of celebrity with her granddaughter Janey, played by YouTube super-celeb/author Eva Gutowski. For Janey, fame and relevance equal followers. Grandma, on the other hand, is more old school. She says, “You know who’s famous? Marilyn Monroe is famous. You know how many social media followers she has? None? She’s dead.” To wit, Janey replies, “Actually grandma, Marilyn Monroe has, like, a million followers on Instagram.” Grandma’s brow furrows as she looks at her granddaughter askance and says, “Your world confuses me, Janey.”

This plaintive confession, full of both pathos and bathos, lies at the core of this heart-filled, six-episode buddy comedy that dropped on YouTube Red on March 22. At first glance, the series — currently available for binge-watching — follows college grad Janey and her grandma as they try to make it in Hollywood and consequently face all the the expected impediments therein: failed auditions, bitchy actresses and ageism. Throughout, the two women manage both to jibe on their generation gap and connect on their shared womanhood. It’s familial. It’s funny and it’s fun to watch.

“Me and My Grandma” is the second scripted effort for co-creator Gutowski, who previously starred in “How to Survive High School.” The volcanically popular lifestyle vlogger (7.6 million followers on YouTube, 5.4 million followers on Instagram) wanted to create a new platform that demonstrated not only her acting chops but also the deep love she has for her real-life grandmother, who continues to be a source of inspiration and support. “The show is my life story,” Gutowski says. “I grew up close to my grandma. When I moved to LA, she had to find a way to drive to my door. Like she would drive all the way to LA even when I was sick. She drove me to school up until my freshman year of college. It’s embarrassing pulling up to college in a 17-passenger van.” She laughs and then admits, “I started YouTube freshman year living in my grandma’s in a purple bedroom that she helped me paint and I didn’t move out until my sophomore year.”

This quality of deep familial love and respect tinged with the ridiculous pervades every episode. As does the unexpected-yet-perfect buddy pairing of four-time-Emmy-winner Rhea Perlman with the well-known YouTuber. “There aren’t a lot of roles in comedy for women of a certain age to play, especially with a 22-year-old,” Gutowski admits. “You’d think it would be awkward to play with a grandma as a best friend, but she taught me so much as an actress. She has so much history.”

While nothing quite beats a 22-year-old saying “women of a certain age,” or getting vagina steams with her grandmother, if you were a sentient being between the years of 1982 and 1993 — in other words, not a millennial — chances are your TV psyche is cozy with the likes of Carla Tortelli, the wise-cracking waitress from NBC’s “Cheers.” Sidenote: Perlman played Carla Tortelli for all 273 episodes. Recently, she has had a recurring role on “The Mindy Project” as Danny Castellano’s feisty mother. In other words, the woman is sitcom royalty.

When I ask Perlman how she feels about being referred to as a “sparkly prune” — a quip from the show — or about this newfangled way of communicating and/or accessing content, she says, “It baffles me. That may be the wrong word. It boggles my mind. I want to keep up. It’s generationally hard but not impossible. ‘Grandma’ embraces so much of it but I’m behind. After this I have to put out a tweet. I’m not so great at this. I’m still asking, ‘How do you attach a picture? What’s a hashtag?’ Okay, I know what a hashtag is but I’m not really sure how to use them. I keep thinking why would anyone want to read this. So many people are talking and chattering but I respect it.”

When “Me and My Grandma” begins, we see this same struggle reflected in Perlman’s character, who subsequently gets more and more “with it” as the show progresses. (There are some great lines here, such as, “Blac Chyna’s a person, not dishware.”) This may or may not be related to Eva’s own real-life grandmother, who is actually now so tech savvy IRL that she has her own YouTube faves and checks Eva’s web statistics for her. Additionally, between the two actors there’s a reciprocal exchange of skills and ideas that leaks into the way both play their scenes together.

“All young people have something to teach us,” Perlman says. “On YouTube, Eva has a freedom to express herself. It’s genuine yet still theatrical. It’s something to emulate. I’m always very careful with myself but Eva’s got an energy she feeds off of from making her own life. She wants to be an actress but she’s also discovering herself in front of other people. She’s not going about the Hollywood career in the typical way. She’s not going to get an agent with pictures and résumés and pounding on doors. This is a new and different form and she has more control. She’s the creator. This is her idea she developed.”

“I had the idea for the project for the past couple years,” Gutowski says. “I developed the project with Annie Stamell. She and I wrote the pilot. Then we got together and fleshed out the idea and the arc. I added some lines to make it funnier and more personal. It worked out that the next-door-neighbor character Heidi — Shelby Rabara — was an Asian lesbian and Hank is her brother. I like how that turned out. I wanted to create a space where it wasn’t a white, straight world.”

Speaking of the white, straight world, I ask Eva, who came out as bisexual on Twitter in 2016, why she didn’t make the love interest in the “Me and My Grandma” a woman. Like, why go guy if you’re bi? “We talked about that,” Eva says. “Maybe for Season 2? My viewers are pro-everything. They want Heidi and I to get together. They want a lot.”

Indeed, one gets the feeling that the day never ends for either of these women. One of whom is an absolute master of her craft while the other uses social media as a platform for change through the guise of goofy advice and proffered friendship with her many followers. “Growing up I was going to school for broadcast journalism,” Gutowski says. “I wanted to be Oprah. Then I started in college wanting to entertain. I looked in the entertainment space and saw what was missing. When I first started on YouTube, it was guys doing comedy and girls doing makeup tutorials and I was like, wait, I don’t even own any makeup -- so I did lifestyle. My channel is really a positive outlet for people to come every day after school. I make my videos so that people can have something happy to turn to — a positive message. I’m making it okay to talk about stuff.”

Though most of this “stuff” is light and fun, some of it is honest and harrowing, such as when Eva relates the story of being date raped in high school and suffering through the subsequent emotional aftermath. “I got scared,” she admits. “What if it was taken the wrong way? Then I saw a lot of cases with nobody caring and I mustered the courage. I got a lot of positive response. If you go to my channel you see 30,000 supportive comments from people speaking out and thanking me for being honest.”

“YouTube is a business and being a YouTube star is a business and they take it very seriously,” Perlman says. “They make sure to talk to people all the time and they have to work very hard and stay aware and connected. They shoot all their own commercials when they endorse things. They never stop posting.”

If Perlman has learned how to tweet, what has MyLifeAsEva learned from her time spent in the presence of this luminary and yogi? “We talk about beats and how to play something,” Perlman says. “She sees how seriously I take my homework for the show, learning-wise. We’ll get the script and I’ll spend time with it and she hasn’t even looked at it. She’s very free but she’s learning that there’s a craft to it.

“In the dressing room it was all 20- and 30-year-olds with Rhea,” Gutowski adds. “Rhea brought in a toaster or links to videos she wanted us to watch. We had a lot of things we could talk about. She’s really funny.”

“Whatever innovations come we have to accept them because they are here and this is called change,” Perlman continues. “We can’t get away from them. We have to embrace them. The thing is, it’s changing exponentially every six months. At some point, even someone like Eva won’t be able to keep up.”

Eva Gutowski Me And My Grandma Rhea Pearlman Youtube